iBlinds is an idea that I myself had dreamed of a few years ago. I first integrated my window blinds with Smartthings almost 4 years ago. Automated Window Blinds - Spark Core They have worked consistently and efficiently everyday with a little help from a light sensor. Unfortunately while my creativity brought the ability to do this for cheap it lacked a certain consumer grade quality to it. I had always thought the ability to use a z-wave chip would bring efficiency(you could power it with a battery and solar panel). This is exactly what @eric1500 has done. The product is called iBlinds and as of a few days ago is officially on indiegogo: https://www.indiegogo.com/projects/iblinds-make-existing-window-blinds-smart#/

Eric was gracious enough to allow me to test a prototype and I was very thankful that he thought of me. Unfortunately I was quite delayed with my review due to well life and a slight health scare. For this I am sorry Eric for the delay of this review, but you getting on indiegogo inspired me to support you.

My first impression upon unboxing was that it was definitely a prototype and at first I was a little worried about how the device would operate. The box included the main controller/motor unit, a solar panel, a switch and a battery backup. This being a prototype the parts were all 3d printed and I think this was what had created my initial impression. All of this being said I still remember when I was first hacking together my first particle photon and cutting off pieces of blind rods so I could attach a servo and make my blinds work, so I realized Eric’s implementation was a much more finished product than I still have running my blinds.

Initial impressions put to the side I decided to start the inclusion process, so I wired up the solar panel, the battery and the blind unit and gave it a shot. The pairing process was very simple. Smartthings identified the device right away and I used a similar device type for a dimmer light as I had done some years ago to get the unit to respond. This worked extremely well, but Eric does have a device type that works much better.

I kept the device hooked up over the next several days testing it from time to time and setting it to automation. I was very pleased and did not have a single missed command.

I did not want to end there though. I have moved much of my automation to homeassistant as I had wanted local control of my devices, so I decided I would try to pair iBlinds on that platform as well. I did not have the same success as with Smartthings. I was able to pair the device and I could get commands to fire and open and close the blinds, but I was not able to control the position. This is more a limitation of the platform (homeassistant) as it relies on open zwave and items must be added to the ozw database to be recognized. I think that I could have adjusted the ozw database to mirror a different device, but this was just a test run.

Overall I would highly recommend iBlinds and in fact I will be backing the project. It is great to see a long time community member work and achieve such an awesome goal.

iBlinds is truly the consumer grade device that I had always dreamed would be available. So, jump over and support the project Eric implementation makes it much easier for both homeowners and renters to be able to implement this solution. 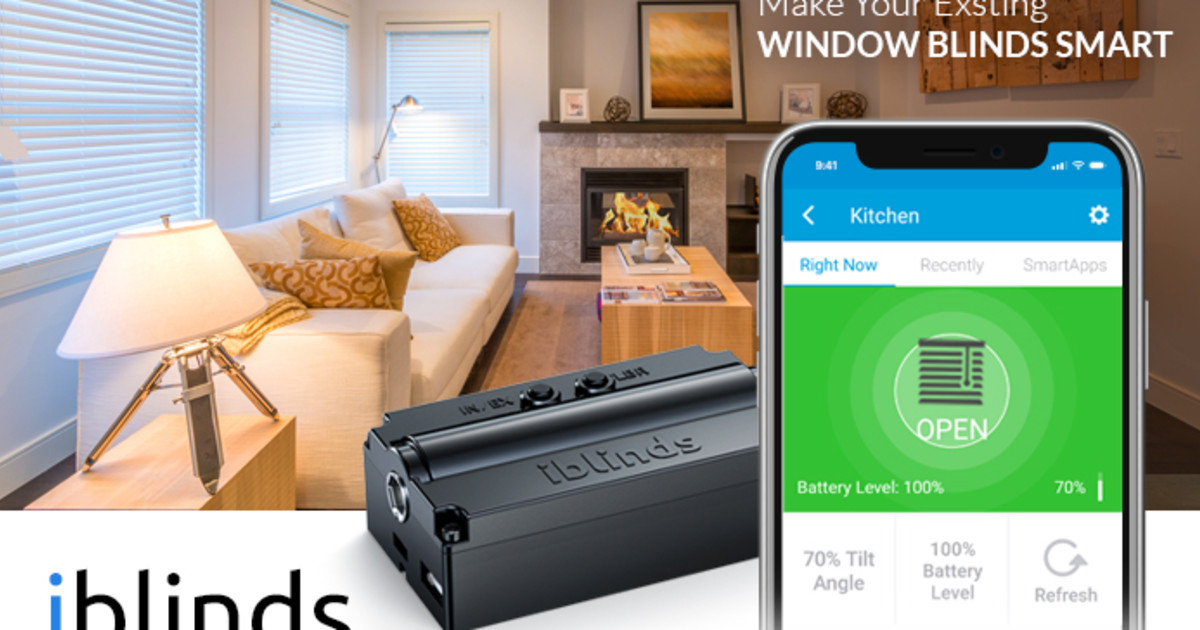 What does official review mean?

Other than price and being zwave, how would you compare this to mysmartblinds? That one has been available for purchase at Home Depot and other places for about two years and they hold 50 different patents on retrofit smartblinds. They are also UL listed.

(If it’s like most other home automation patents, the fact that it’s Bluetooth rather than Z wave won’t affect the patent. It’ll just be defined as “radio frequency”.)

It’s going to be hard for most kickstarter blind projects to come to market without patent infringement unless they’re doing something truly unique, in which case that would be good to know about.

Does Iblinds have any patents pending? Or is their main selling point being Zwave?

Official as the product is not in production or readily available to the public yet. I was requested to do the review because of my experience with blinds and with building device types for smartthings, which if you look at my post you will see goes back almost four years. That makes the review more of an expert based official review instead of just someone who picked up the device off the shelf at the store and decided to write the review.

So you were given a free product in exchange for a review?

Eric was gracious enough to allow me to test a prototype and I was very thankful that he thought of me.

Test it and return to the company? Or test it and keep it?

No offense intended, it’s just that your post reads more like marketing material for the company and their indiegogo campaign than an unbiased review. IMHO.

Official as the product is not in production or readily available to the public yet. I was requested to do the review because of my experience with blinds and with building device types for smartthings, which if you look at my post you will see goes back almost four years. That makes the review more of an expert based official review instead of just someone who picked up the device off the shelf at the store and decided to write the review.

I believe the Federal Trade Commission in the United States refers to those as “sponsored reviews” as opposed to “independent reviews” which are not solicited by the company.

Just receiving a free product to test is enough to move it into the sponsored category, so I have added the “sponsored” identification to the thread title.

Sponsored reviews can definitely still have value for other people. As you mentioned, you yourself may have particular expertise to add weight to the review, and it doesn’t mean that the review was written by the manufacturer or intentionally to favor the manufacturer. But under US law the fact that the manufacturer requested that you write the review and gave you the product to test is considered important information for consumers to be aware of and does make it sponsored content. So I’m glad you included that information in your post.

The FTC’s Endorsement Guides: What People Are Asking

The official website of the Federal Trade Commission, protecting America’s consumers for over 100 years.

I’ll accept that it’s less of a coordinated marketing effort and more of just a response to the new Indiegogo campaign.

I personally enjoy reading a lot of sponsored content about pre-release devices as long as they include technical specifications and actual information rather than just marketing hype. Often the ideas are interesting, and as everybody here knows, I’m a great believer in the idea that choice is good and having different models with different features to choose from benefits the consumer. So I’m all in favor of product champions as long as sponsored content is identified as such. In a lot of ways it’s just an insider look at something that will be available later, and that’s fun in and of itself.

As @JDRoberts said, this is just a product that I got to test and am really excited about it’s success. I don’t think anyone here is trying to pull on the strings of corporate conspiracy. We’re all here to share what we’re passionate about, and I haven’t really been excited about many home automation products until this fell into my lap. Drama like this is primarily why I don’t participate with the community anymore.

No. Because I can make my own, which I get more satisfaction from. Just need to get on the ol’ soldering horse.

This is not part of a coordinated marketing effort. If you look back on my posts I have integrated devices and provided coding support and help for others in the past. Eirc messaged both Keith and I in an effort to get some honest feedback about the device. We provided that and both of us decided to support one of our community members Eric in the same way that Keith and I have always helped this community.

It is somewhat insulting that this community looks at this in any other way. I have never asked anything of this community or tried to profit from it like other members, instead I have written code spent time to integrate things and help others because I can. My github account has several instances of free code that I spent time developing and provided to the community. @jkp @marktheknife can either of you say that you have truly developed code and integrated devices in this manner? If so then I would hope that you can see that I do this because I can not because I feel I can get something out of it.

Like Keith I am not currently using the device mostly because I moved over to homeassistant and as I stated in the review I could not get the full functionality out of iBlinds currently.

In regards to @JDRoberts early comments I don’t know that this device does anything different than mysmartblinds except that it provides direct integration into automation platforms which mysmartblinds does not. This can be extremely powerful in the scenario that you want to synchronize your blinds with other things such as lights or light sensors(dim the blinds when lux is greater than 7000). So from that perspective while they are not functionally different they are hugely different in their ability to be automated or to trigger additional automation.

Thank you for the follow-up info. I am sorry to hear you felt insulted, as that wasn’t my intention. From my perspective, I was asking for more info and offering an opinion, as we are all free to do here.

But you put your review up under the heading “Official” as if you were asked by SmartThings to do a review of the item and are reporting back the results. Very deceptive IMO.

I think the confusion here stems from the use of “official” so I’ve edited the topic title to just remove that word. Other than that I don’t see an issue with sponsored reviews so long as the meet the quality standards we expect here (I think this one does) and that they are clearly labeled (this one is).

@jjhtpc please PM me if you’d prefer a different wording and we can definitely work something out - I’m trying to avoid confusion, not be draconian about this.

is that ebay page an official sales channel for iBlinds?

Do iBlinds have integrated scheduling capability (so I don’t necessarily have to configure that in ST)?

no. they don’t have an app or anything. You have to pair them with a z-wave hub and that’s hub’s app.