Temperature reporting should be back to the way it was before. Please let me know if there are any issues persisting.

Yup, my vents are reporting temperature now, thanks!

On a separate note, did anyone notice that the Classic app stopped showing pictures for a Room? All my Rooms have lost the image (png) I was using, except 1.

did anyone notice that the Classic app stopped showing pictures for a Room? All my Rooms have lost the image (png) I was using, except 1.

Yeah, figures I’d have weird stuff going on for a Friday. I can easily add mine back.

@RBoy Both my ID Locks stopped reporting the code that was used to unlock. Just says unlocked or locked. Are you seeing any similar problems?

Can you open the IDE Live Logging, unlock using your code copy/paste and PM me your logs

Go ahead and log a bug in Centercode, and I’ll investigate.

Hmmm, something is up. A couple of my Rooms now have names I gave them a long time ago. I made Room name changes a couple months ago, and now they’re back, along with no more Room icons.

I’m sure this can’t be firmware related, so I’ll address this elsewhere because this is a little concerning…

Anyone using Utilitech sirens? If so, do you see this type of battery reporting activity:

See how the battery reporting bounces up and down from 0% to the actual value?

Both my Utilitech sirens are doing this, and both are using the stock ST zwave siren DTH.

Responded to you on the centercode, but these are “false” values sent by the device, not sure what the hub can do to circumvent this.

This device is a Works With SmartThings certified device, so we will investigate this device internally.

Anyone using Utilitech sirens? If so, do you see this type of battery reporting activity:

Yes I’m seeing the same thing BUT on 24.20 so I’m guessing either the bug has carried over or it’s a platform issue as this started recently. Brand new batteries. 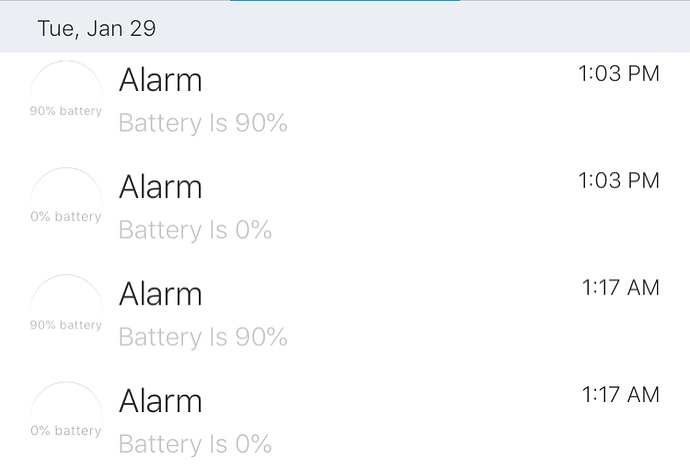 It’s the only Aeotec Nano I have so I cannot verify if this is something with these devices.

I had a similar issue with 2 Aeon Labs multi sensors. What I did, was go into ide and changed the DTH to some other device, I think I picked Danalock or something like that. Then I clicked update. Waited about a minute or so, then switched back to the appropriate DTH. The devices came back alive within seconds. Give it a try…

Edit: Turned on debug in the settings. I get this in the livelog:

I’ll take a look. If someone who is not in the beta could get me a similar log of the “catchall” or “read attr” message received when a button is pressed it would make my life easier. But I’ll see what if I can track down where the difference is.

Hmm. I see your button has generated some push events in the past day. Is this still a problem, or did it resolve itself. I haven’t been able to find anything that suggests there is a systemic problem with the buttons.

For those of you who are Hub V2 users and have already received the 0.25.15 firmware, we are in the process of releasing the 0.25.16 firmware. We will be rolling the update out to Hub V3 users later this week, barring any unexpected issues that arise.

Note that those beta testers who haven’t yet received the 0.25.x firmware will not be receiving the 0.25.16 firmware. We are still waiting to see if we need to do any additional testing focused on converting to the new Z-Wave framework. We should be ready to roll out to these beta testers within the next few days.

Already on .16. Was the Z-Wave garage door bug (for the switch failure meesage) that @Automated_House reported, deployed in this release? I assume, it was not because I am still seeing it.

The issue that you mentioned, is actually with the device not responding to the polls sent by the hub.

The issue is not a hub firmware issue or a platform issue, it is strictly with the device, as I mentioned, we are now evaluating the status of this device being a Works with SmartThings given the bug found with the device.

is actually with the device not responding to the polls sent by the hub.

Ah, ok, I thought @cbaumler said you guys will update the logging to say “Not responding to polls - since that’s more accurate.” Not a big deal. At least you guys looked at it.

Yes, we updated the exception message to have a better description of the what has gone wrong with the device. Sorry, I just wanted to make sure that users do not think that it was a hub issue.