In a post-Groovy world, what options do we have to create a routine based on a regular sub-day timer? For example, run a vent fan once an hour for 10 min. I have seen anything in the stock ST app. Does anyone have an edge timer driver for creating these triggers?

For example, run a vent fan once an hour for 10 min. I have seen anything in the stock ST app. Does anyone have an edge timer driver for creating these triggers?

It could be easily added by adding preferences for On time and Off time in a switch driver.

It can also be easily done with two automations, what happens is having timeouts are not executed locally.

You can do it with a Rule too. Haven’t tried this but it looks about right.

Both good solutions. Thanks for the suggestions. I tried the “Power on off” rules that you get in ST. They allow for 3 on/off sessions per day. Unfortunately, they only ever turn on for me and don’t shut off.

@blueyetisoftware,
Hello
I added a timer with On and Off times programmed in preferences in the zigbee Switch Mc driver, in case it can help you

I am trying to do something similar by turning on a virtual switch (which triggers an alexa annoucement) hourly when my garage has been left open. Any thoughts on how to trigger this routine every hour? Thanks

I think, now, with new Android app version (maybe before). there is an option for “Stays this status for how long”. that could be used in an IF switch is ON

which could be used to trigger a virtual switch.

I think that would work, anyway.

I am trying to do something similar by turning on a virtual switch (which triggers an alexa annoucement) hourly when my garage has been left open. Any thoughts on how to trigger this routine every hour?

You can make a routine with the door sensor and a virtual device, for example called a reminder:

In example first notification at 1 minute and every 2 minutes 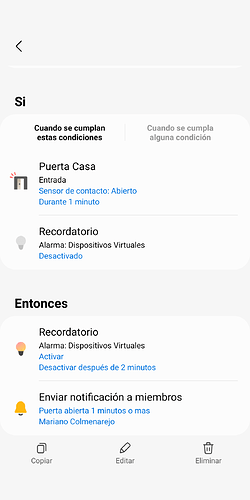 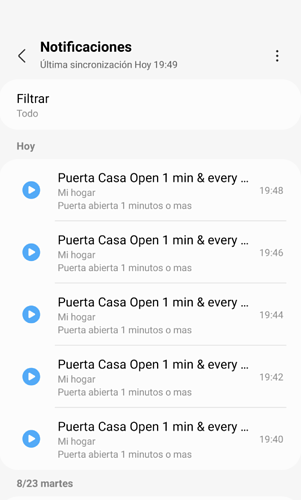 You can also made the routine with the garage light itself.

It’s the same, but without virtual switch

Amazing. Thank you this is exactly the logic I needed. I had about 8 routines built to achieve the same thing and not reliably.

Any idea how to use this idea for two garage doors ? Ie. If either garage is open for x time, send reminder every x minutes? I could duplicate the routine but I think that will result in two independent reminders. I want one reminder every 30 mins regardless of it one or both garage doors are open. Is this possible? Thanks.

At the moment it is not possible to make routines that have an OR condition and an AND condition. you have to do 2 routines;

A routine that says:
IF door A or door B is open for more than x minutes turns On a virtual reminder switch and turns Off after y minutes + sends a notification.

Another routine that says:
IF switch Virtual reminder is Off THEN turn on switch virtual reminder and turn it off after y minutes + send a notification

In the example you provided of routine 2, wouldn’t that routine result in sending a reminder even if both garages have been closed? This would be a phantom reminder I think…

wouldn’t that routine result in sending a reminder even if both garages have been closed? This would be a phantom reminder I think

Yes, you are right, the second routine stays in a loop because it only has one trigger.

You would have to do another routine and add another virtual device All doors check:

I think It will work for two or more Doors open

Hi Mariano, as stated in another thread, I’d like to get recurring reminders at certain intervals if a door has been left open. I’m not able to wrap my head around this routine. Is it one routine per contact sensor? Each contact sensor requires a virtual device? What is the logic for the virtual device control? I don’t see a “reminder” option for the “then” logic in the ST routine options.

in one moment a send you two examples

What is the logic for the virtual device control?

I don’t see a “reminder” option for the “then” logic in the ST routine options.

The reminder is the name that I give to the virtual device, you can name it whatever you want.

This routine is for each contact sensor and requires one virtual device each.

If you are going to use more sensors you can do other things:

Create virtual device SwitchBoard 2-Switches. I renamed as Virtual Letf it Open
You can write the name for every switch, only for detail view. 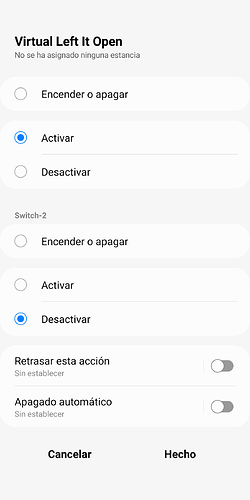 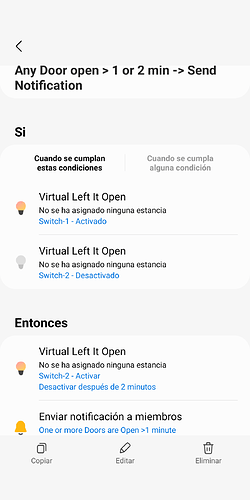 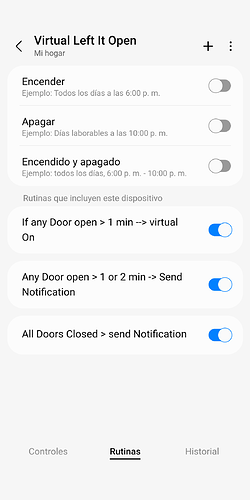 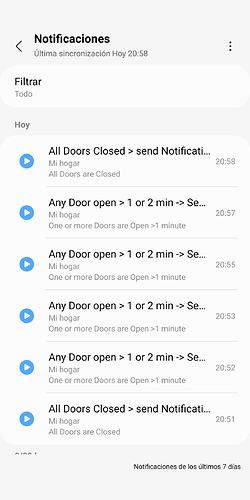 Something happened while I was testing

My power went out for a few minutes. Unfortunately after everything came up the cycle was broken and would never recover. Simply the loop stopped and stay liked that. As if, once power came back up there is no conscience of something been “turned on” or “turned off” for some period of time. Maybe this is a bug?
Anyway, if you don’t care you can wait for rule 3 to get things going.
Otherwise (OCD), you can run a routine in sharptools to monitor ST and kick things back again.
BTW, Sharptools is also inflicted by the same issue as smartthings and you need to create a routine similar to create a cycle (inspiration here). However in sharptools you can rely on variables.
In summary:
Rule1: 5 minute loop in sharptools by setting a boolean variable on/off. Everytime the variable is set to true, then increase a counter by one. If counter reaches two (problem) reset virtual switch in smartthings (to kick things back in operation)
Rule2: Every time ST virtual switch changes to on, set counter to zero (this is ST saying no need to fix me I am working)
With these, the longest that it goes with an outage is 10 minutes

I’m guessing it’s because SmartThings still does some Routines with timing in the cloud and not local on the Hub.

However, since you are using @TAustin’s Virtual Device Edge driver, take a look at the virtual motion device since it has a built-in ‘motion duration’ timer. I’m using the built-in motion duration timer for a few things.

Strange since the routines have the little home icon indicating they happen locally. Also the issue was a short power outage of 3 seconds. After that power/internet was fine after all equipment was up (maybe 3 minutes). But routine would not kick in.
I will check the motion sensor