I uninstalled and re install a keen vent and it does not have a custom driver.

I uninstalled all custom drivers and apps before i attempted to re install the keen vent. 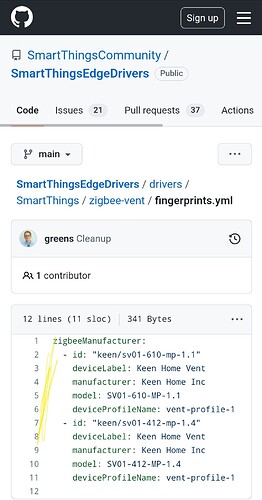 All mine were converted to Edge drivers automatically a couple weeks ago, so I’d expect yours will eventually change as ST gets closer to September 30th.

Did you have 1st generation keen vents or second? I have second generation and that fingerprint does not seem to be listed. No idea what version 2 was not included, hopefully just an oversite. But we need a clear path og how and where to report these things. I contacted smartthings and was told edge ALL edge drivers are still beta therefore not supported. WTF eve those when i installed a new switch it automatically install an edge driver. But according to support that switch is no loner supported because it using a edge driver. Someone needs to get support sorted out.

Good point, mine are most certainly gen 1 devices because I’ve had them fir a very long time.

One thing I haven’t tried yet is to remove ALL vents from ST and then add one to see if that “clears” the use of Device Handler and pick the driver instead. Have you tried that?