Yes, the Android Harmony app and the ultimate remote touchscreen perform differently for lights only. All other devices function the same.

I cannot see my TV state on my dashboard which would be very helpful.

I have a Power Off activity In my Harmony that when the activity ends, powers down my tv. I use a virtual switch to trigger this activity via IFTTT and Alexa. How do I do this natively in ST now? The trigger smartapp only has the ability to start a activity not end one…

Mine has the selection for activity off; although, I’m not certain how you would have a start and end activity without 2 instances of the app.

Actually, it does. Under “Start Activity” there is the option “Activity Off”.

You would need at least 2 instances of the trigger app. An ON instance for every activity you need to start and at least 1 OFF instance to end the running activity.

Awesome, this is exactly what I needed to do. I had one hub running version n-1. Took 30 seconds to update, and all hubs now appear in ST. Thanks!

Thanks! This is a poor GUI Design as it says “Start Activity” so my eyes didn’t think to go in there and look for a Power off command/activity. Anyway, it did work and powers off the activity that is currently on, which is really nice since I don’t need to keep track of what activity is currently running and can power everything down regardless. (nice thinking by ST on this one).

ance to end the ru

where is that option located? When you initially create the activity or when you edit the activity?

where is that option located? When you initially create the activity or when you edit the activity? 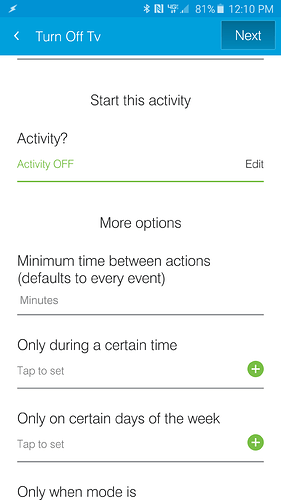 You need to create a separate trigger smartapps that Starts the Activity Off action when you turn off the virtual switch. See pic above.

Is the Activity Off a manually created Activity in the Harmony App? I do get the smartapp side of things just not the Harmony side.

The Activity Off is a generic option provided by the smartapp. It simply turns off any running activity. It pretty much does the same thing as turning off an activity via the remote or pressing the power off button on the remote (if your harmony remote has one).

No kidding. I thought that had to be an activity in the Harmony software. I can just use the trigger app to turn off the Harmony activity then. I’ll try that out. Thanks for info.

I ran into this same confusion. In the SmartApp, if there was a End Activity option, it would be clear to then do Power Off under there. It doesn’t make sense to Start an Activity that Powers Off when that goes against Harmony’s logic. Not a big deal if we understand it, but can be confusing for newbies.

Is there a nstive way to tie this into a mode?

I figured it out…thank you!

I am trying to authorize Harmony-ST.The app goes to authorize screen i get to select my ST virtual switches it and then It says cannot retrieve devices…

What’s the best way to simulate a button instead of a switch? For example, I have an activity that hits the select button. I don’t want to save the On/Off state of the button.