+1 for the Peanut outlets.

The fact that the fan speeds are changing means there is communication (at the moment at least) between the hub and the controller. A repeater is a good idea in general for this device but I don’t believe it will resolve your current issue.

Does anywhere know how we can setup some kind of reliable stock alert which will send out a txt message or e-mail. I have yet to receive an e-mail already from Home Depot whenever these have gone in stock. I have been trying to buy just one of these for the last 6 months. Any help would be appreciated.

I’m not sure if it’s still valid, but check out post 33 in this thread.

UPDATE: 03/03/2017 If you can’t wait for the controller to become available at retail you can order the repair parts direct from manufacturer at 800-749-3267 King of Fans Model #43260 UPC code 82392 43260 Wink Receiver MR101Z (J) $32 **Remote Control TR227A (K) $25 Total for both with shipping $72 which is 7-10days ** EDIT: However you don’t have to get the (K) Remote Control stated in the manual if you prefer an in-wall mounted version or a Thermostatic version instead. See my post#156 here I also asked about the repair parts for the ZigBee Fan Controller Model # 99432 itself to verify parts between the universal retail version ZigBee controller and the one included with the Gardiner Fan but her computer system didn’t help her identify the difference. (there is a reverse button on t…

Just an update everyone, I went out of town for a week and when I came back all was resolved! thanks everyone for your guidance and eventual resolution. I do have another question and i’m thinking of installing another unit how do I adjust the names to reflect which room the controller operates? Would I need to rename the child handlers also? Can I change the names to add say Master Bedroom for instance? thanks again.

You should change the name when it is initially found by the hub.
Otherwise you can change the name of the main fan device and then rebuild the children. This will delete and recreate all the child devices with the new name as the template. 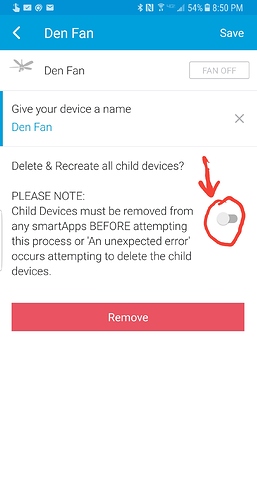 Thanks stephack I will give this a try.

I ordered two of these and am having some trouble installing them. I have installed several of these types of controllers before, just not these Zigbee equipped models. I can’t seem to get either of my controllers to work this go round though. I have four wires running from switch to ceiling. Black & red (both load), white (neutral), and green (ground). I can verify red and black are hot with the switch on with a voltage detector. I have black to black and white to white going into the controller. I have blue to blue, white to white, and black to black from the controller to the fan. I can detect voltage on the line in wire on both sides of the connection from ceiling to controllers with the switch on, but I can also detect voltage on both sides of the black wire between the controller and the fan. No voltage detected on the blue light wire and neither the fan nor the light come on with the switch. Anyone have any idea what I could be doing wrong here? Thanks!

Edit: Over the course of typing this the fan finally came on, but regardless of the manual fan speed set, it doesn’t appear to go any speed other than slow. To make matters weirder, I have since discovered I can detect voltage on the blue wire between the controller and the fan but only when the manual light pull chain on the fan is in a certain position (not sure if it’s off or on. Now I am really confused. Clearly power is getting to both the fan and and the light, so I have no idea what exactly I am doing wrong. Maybe my fan isn’t compatible for some weird reason, although I couldn’t imagine why it wouldn’t be.

Are you using a meter? Voltage sniffers are unreliable. Not sure why there is a red wire unless it’s a 3way setup.

No idea either. The red and black wires are both running from the line side of the wall switch though. Either or works for fan hot or light hot. There are many 3 way lights in the home but this room only has one switch. What I don’t get is why the controller either doesn’t work or half works. Barely any fan power, and no light. I not sure I wanna mess with hooking up the multimeter to my AC power.

Connect the rest as normal, and turn the switch on.
If the fan comes on, pull the fan chain until it stops, then pull it one more time to make sure it is set to high.
If the light does not come on, pull the light chain and it should come on.
If neither come on and you have an RF fan remote, try it (so long as they are in the same dip switch channel). Follow the above steps for chains once working.
If neither come on and you don’t have a remote, try to pair it to ST first, then turn on light/fan through app and adjust chains appropriately.
If you can’t pair to ST you need to reset it. Turn switch off. Count to 3 slowly. Turn switch on. Count to 3 slowly. Repeat this until the light blinks. Then pair and set chains.
At this point, don’t ever touch the chains again. In fact, I’ve removed them from my fans.

Have you reset the receiver?

Are you experiencing the same behavior after totally disconnecting the red wire as @bradlee_s suggested?

I did not disconnect the red wire from the wall switch, it appears both the red and the black connect to the line side of the switch though so theoretically it should not matter, but I will pull the switch off and try again later today. I have not reset the controller. I was however able to pair it to ST. I had to install a custom device handler before it would even show any controls but once it did they didn’t seem to actually work.

Are you sure both the red and black that go TO the fan are connected to Line? If it’s a single switch and that wire definitely goes to the fan, the Red should be connected to the line side to provide constant power to the fan motor, but the black to the fan should be on the load side so the light is switched.

So, as far as wiring is concerned, and just to restate it. Wiring colors are general guidelines however they can always be different. That being said, did you have two different switches to control that fan and light separately? I have a few fans in my home that have a switch for the Fan, then a separate one for the light. That would be the only use a red wire SHOULD come in here. (Once again, I have several wires in my home that are red and are LOADs, so don’t take that to mean everything).

If this is a single-gang box, you should have a black and white coming in, the black hits your line on your switch, then black coming out of the switch from the load. Whites should all be bound together. Grounds as well.

What are the voltage readings going into and out of the controller?

If this is a single-gang box, you should have a black and white coming in, the black hits your line on your switch, then black coming out of the switch from the load. Whites should all be bound together. Grounds as well.

In this case, you could have a red wire connected to the line side of the switch to feed constant power to the fan so it operates independently of the switch (through the chain).