I am chomping at the bit for one of these. Stalling on fan-light control by multiple modules.

Wink also partnered with Home Decorators as well, and they are coming out with a fan with an already included antenna. it doesn’t say on the website, but it has be either Z-wave or Zigbee.
http://www.homedepot.com/p/Home-Decorators-Collection-Gardinier-52-in-LED-Brushed-Nickel-Ceiling-Fan-43260/206648825

I just got tired of waiting for the Hampton Bay fan so I thought I would get sneaky and order just the Wink receiver (J) and remote control (K) as repair parts from Home Decorators directly.

My guess is that the controllers are identical and both fans come out of the same factory just branded differently. Anyway I called the 800 number and on the phone they tell me the fan is too new and they don’t have the parts available for ordering yet.

And to make matters worse, it turns out I couldn’t even order the entire fan if I wanted because even though it is on the website I couldn’t find a zipcode for a HomeDepot in my entire state that actually stocks them to be ordered 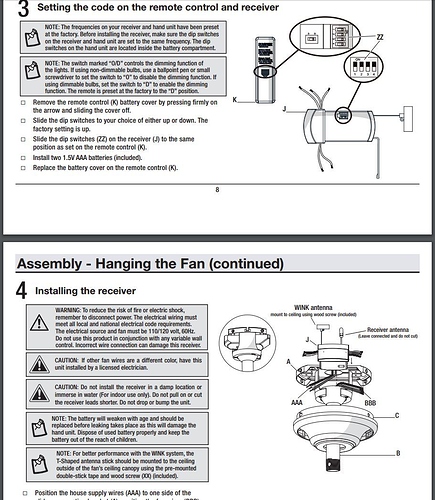 When these Wink fans come in and IF we can make them work with ST I am also thinking the best option for me is to get this.

UPDATE: Yes, this is compatible with the ZigBee controller. I’ll post a video in my review of First Impressions.
Hampton Bay wall mounted switch and have it work along with the included table remote. 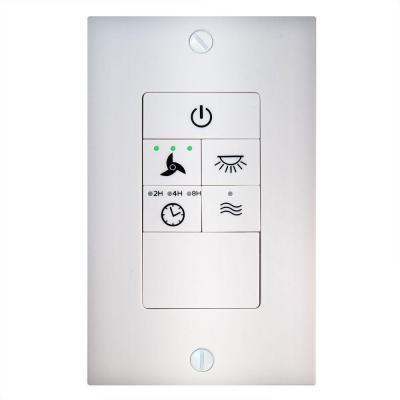 DOUBLE nuts - you are making me track this undead thread again!

I have an old Hampton Bay ceiling fan (very nice, heavy but NOT classic with oil-bath sleeve bearing) in the bedroom. Recently I tried to squeeze 3 modules into the fan base housing and almost used a hammer, trying to keep using a wireless nonZwave fan controller with wall remote - gave it up for now. The only improvement was, I oiled the SEALED bearings and now it doesn’t even slightly tick - the silence may actually be worth the hassle. Making fans perfect, is tricky - oil is not great bearing lube so I hope it stays silent for a couple years.

it should work with 2 modules (1x GE fan WALLswitch and 1x Aeon Micro Dimmer) - but I thought the same thing about 3 modules.

Recently I tried to squeeze 3 modules into the fan base housing and almost used a hammer,

In my installation, I ended up “modifying” the bulky GE Fan Control by bending back all the aluminum corners to make it fit in the canopy. I guess I could have cut it down but I was lazy.

It would have been a lot easier if the ceiling fan box was a standard size but for mine it was one of those pancake thin size versions that secure directly to the ceiling joist beams. My last option was to cut in a retrofit gangbox right next to the existing ceiling box to hide a device and then put in a blank cover textured to match the ceiling.

Great idea. I was thinking about doing the 2 relay option but this sounds better. How did you wire it?

Great idea. I was thinking about doing the 2 relay option but this sounds better. How did you wire it?

If you asking about the way I did it, I explain it a little more here.

Heh never even occurred to me to use the 12730 as anything but a wall switch. Great idea…

Looks like the fan is now selling. Has anyone here bought it?

Any idea if they are going to release just the controller?

I was able to purchase one, installed it yesterday, and have it working with the (included) remote. Haven’t attempted to pair it with ST yet as I’m guessing I’ll need some kind of new device type. If anybody is further along than I am, please respond!

It’s still not available at any stores near my zip code and they aren’t selling it online yet. Wonder where you can get one?

I’m in St. Louis and two of the HD stores in the area were getting a few units. The store I normally shop at was getting three of them; I had one of the workers go find one on the receiving dock before they were put on the store shelves.

My HomeDepot doesn’t have it yet… Does anyone have a current website link for the item they could post?

@dalec
After clicking “Check Inventory at Other Stores” enter one of the following store numbers in the search: #1904, #1918 or #1948. Each had two in inventory this morning.

@beckwith Do you have the url link for the Hampton Bay fan? The one in the original post is not valid. This one is valid for the Home Decorators Collection Gardinier 52 in. LED Brushed Nickel Ceiling Fan but I thought there was a less expensive Hampton Bay option available at around $119

** EDIT: However you don’t have to get the (K) Remote Control stated in the manual if you prefer an in-wall mounted version or a Thermostatic version instead. See my post#156 here

I also asked about the repair parts for the ZigBee Fan Controller Model # 99432 itself to verify parts between the universal retail version ZigBee controller and the one included with the Gardiner Fan but her computer system didn’t help her identify the difference. (there is a reverse button on the Home Decorators Eastwind not found on the Universal model) 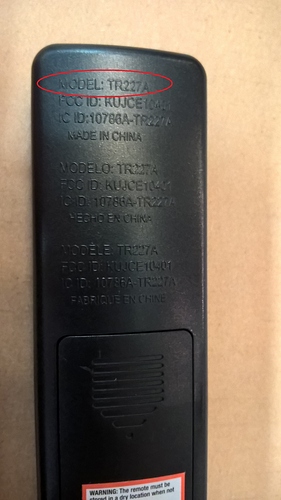 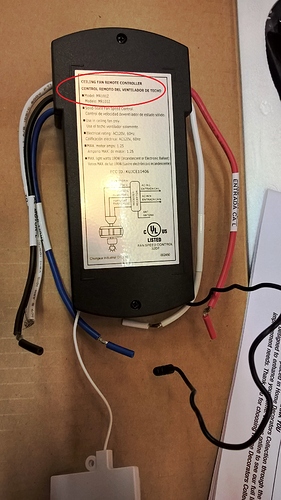 Thanks to @pilot04 for posting the images

I have my review on this ZigBee receiver here.

As of today I was told that it will be 2-3 weeks before repair parts stock comes in because this is such a new model fan and to try back then. She didn’t have a price or even for sure if those parts would be available but to check back.

UPDATE 10/2016
I called the parts department 1-800-283-6513 to order the Wink receiver(J) and remote control(K) only. I am being informed now that they will only cost $80 and should be available by the end of November. So at least they have a price now on the parts and the price is great comparing it to purchasing a motor controller and light switch plus you get the remote control! So I’m keeping my fingers crossed this can be paired and a device handler written for SmartThings.

The one in the original post is not valid.

That first link was for the remote only which it seems Home Depot pulled. With 1.6k clicking the link, they probably were inundated.

I don’t understand, you mean when the fan was running on high it would turn off by itself? Or pressing the high button causes the fan to turn off instead? Or something else?