I purchased an Ever Spring ST812 recently for detecting leaks at our washing machine. We live in a multi-story condo, so any water leaks are devastating.

I was very impressed with the quality of the product and the ease of connecting to ST. It is now a supported product and earlier reviews reflected it was not supported, so wanted to post something more recent.

I really like the remote sensor and the long cord provided. I mounted the receiver well up on the wall in the laundry room and had plenty of wire to run down to the washer pan and mount the sensor. They give you six wire clips to fasten the wire. Everything just appeared well engineered.

I like the corded sensor much better than an “all in one” device where everything potentially sits in the water.

I connected it quickly and configure it to the Smart Home Monitor. Tested the sensor by just wetting my finger and touching the probes. Got and immediate text alert and I also configured it to flash the kitchen lights.

The Smart Home Monitor was cool because it kept sending reminder texts periodically until I logged in and canceled the alert.

I have now installed a second one on my hot water heater pan. May do the dishwasher as well.

Nice product and you can find it on sale. 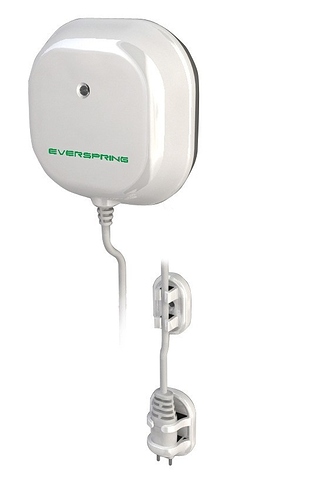 I prefer the aeon.ones. much smaller footprints

I like these too. Lowe’s sells the same devices (as far as I can tell) branded as Utilitech for only $25. I’ve bought 4 or 5 of them so far.

Thanks for the Lowes link. I have one more to install for my dishwasher and I can save $10.

Thanks for posting your experience with the Ever Spring water sensor. I’m trying to choose one for our apartment and I’ll definitely add this to the list!

I wanted to thank you for the info about the sensors at Lowes as well! Those savings really add up when you’re needing multiple sensors!!

If you are talking these at Lowes …they are like 10 x bigger …not anything like the aeon ones.

@Lgkahn, right but they’re the same as the Everspring ones.