Hi There, I’m new to smartthings and this community. I have recently installed the system and bought an echo. Mainly bought it as the smartthings site said that is was supported. I too have the same issue with trying to link the two, have you had any luck connecting the echo to the smartthings hub?

I’m in the US, so I have a choice of using IFTTT or the direct SmartThings/Echo integration. (I now prefer the IFTTT method, but as mentioned my lag is only 8 seconds or so.)

My understanding from seeing smartthings staff postings in the forms is that the current official position is that since Amazon does not support echo for the UK, the fact that the SmartThings/echo integration doesn’t work for the UK is Considered something for future development. They need Amazon to provide the support first.

You are correct. The products shown in Marketplace are part of the regional WWST and compatible device programs. There are agreements, testing, etc. put into place to make them possible. Since Echo is not sold in the UK, any local integrations will be unofficial. [insert nonexistent sad panda emoticon] Even once OAuth is up and running, the local team will have limited ability to support unofficial integrations (same thing applies to Nest, Foscam, etc). However, the cool part about being an open platform is that you can connect devices to your hearts content - and then pester the community (and @Chuck_Norris) with questions.

Much appreciated. Thanks for your response

The delay is random. Sometimes it works instantaneously, other times there is a small lag. Its functional nonetheless.

Sorry but I’m still learning with Smartthings and echo, is the IFTTT account set up in smartthings or the echo app??

Sorry but I’m still learning with Smartthings and echo, is the IFTTT account set up in smartthings or the echo app??

For this purpose, you will do everything on the IFTTT website. So you won’t use either the SmartThings app or the Echo app at this stage.

Instead, each of these has their own official IFTTT channel, you will just go to www.IFTTT.com and you will be able to connect them there. You will need to sign into your two accounts (echo and SmartThings) when you connect their channels to your new IFTTT account. So we say that IFTTT acts as the “man in the middle” to let them talk to each other. This is the method that currently works in the UK.

If you are unfamiliar with IFTTT, this is a good tutorial: 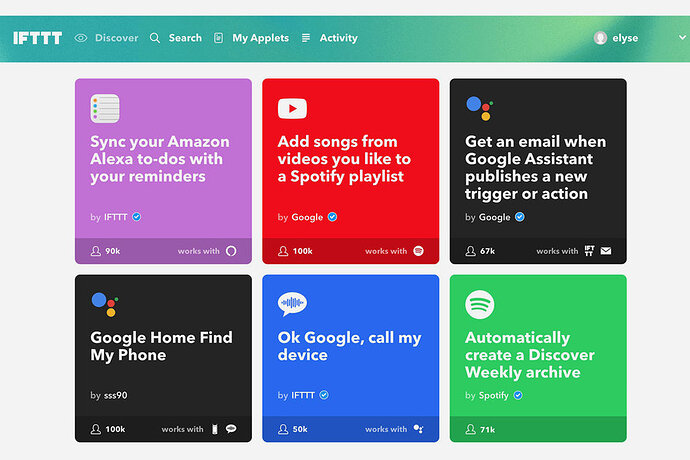 If This Then That allows users to link services and trigger automated actions more simply. We detail how it all works.

Correct… The echo is a super addictive device but we cannot support services/devices that are not available in the local markets.

Whilst I agree you can’t support these devices, it would be nice if there was a work around to get them to work.

Couldn’t you put something to detect when a UK account is used to access the US server and return the results from the EU server much like you do in on the developer website or give us an option to enable this? It seems like it only now doesn’t work because there are EU and US servers and Amazon talks to the wrong place.

A lot of us are software developers so it’s nice if we have a way to fix/work around these things.

Whilst the Echo isn’t available in the UK yet, Alexa functionality actually is, it’s available via the Amazon Fire TV, UK users can attempt to enable SmartThings integration but it still doesn’t work because the browser is sent to the US only login page, it’s very frustrating. Is there any way to officially register interest in a particular bug/feature being resolved?

Hi Aaron - given that it’s this sort of community that helps drive adoption, and the fact that we’re the first people to be able to demonstrate to potential buyers the advantage of a SmartThings type home-automation solution, I think it would be pretty short-sighted on SmartThings’ part to not work towards official support, even without the Echo being available locally. Overnight, there would be a flood of new videos and users able to demonstrate a userfriendly solution that can take voice commands, and the SmartThings brand would be front and centre. Seems like a no-brainer to me.

I’m baffled as to why they are appearing to drag their feet on this?

Seeing as this isn’t forthcoming, has anyone managed to get this to work by exposing a rest api and using the Hue emulator?

Just use IFTTT as the bridge between Alexa and Smartthings

Can people verify this pls?

Hi there, I just got super hopeful when I got a notification of your post so I tried it… YES it finally connects!!! No more “smartapp no associated” message… Going to check it out now. Thanks!

Product’s team let me know today. let us know how u geting on. they said they have cuple of Echos up and running with the UK hub. Aparently they fixed a technical issue.

My Echo linked fine to my UK SmartThings hub - found 56 devices (including my hue bulbs which it already found anyway).

Will have a play…

Edit: Just tested with power sockets and Sonos and it works brilliantly, thanks SmartThings and thanks @MrSpock for the heads-up!

We recently pushed an update that has added Alexa functionality for the UK customers. This should enable Amazon Fire TV voice integrations (and Amazon Echo if it is released in the future).