Ok as i read all the different ideas and programming language not to mention the IT talk CORE IFTTT and I don’t know how many other things I got a simple question to must of this community for sure. Im not super tech guy. I know nothing about programming etc. I have tried to mess with Git stuff and core stuff but frankly I dont want to screw anything up doing that. I cant find a simple walkthrough for someone that’s brand new. (Im talking like picture book style is if Im 5) I can work the app and make things happen based on what is in the smarthings app sure but Im also anal about being able to use things to the best ability I can.

For instance. when I come home I have a light that comes on for me great, However I cant seem to figure out how I can have that light shut off after x minutes. Seems like it would be in the smart app but no go there. Its set up using presense senor and the geo fence. so when IM home kicks in the light comes on. Now can I make it shut off by itself after x inutes or do I have to turn it off?

I would love any suggestions and if you have an answere please try to dumb it down for a guy that’s new to all this.

Here is what I have setup using CoRE. Sounds like exactly what you want. If you don’t have CoRE already installed then check out the Wiki for detailed help to install that and get going. 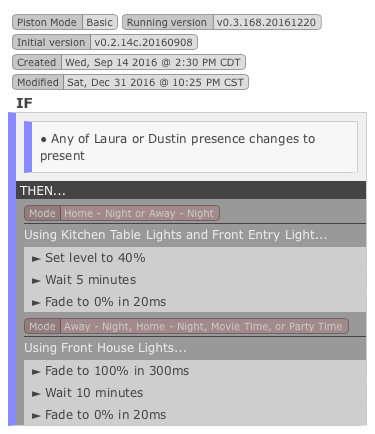 This is a noob’s post created by a noob. EDIT: 9/9/16 updated some links and added some newer info (Amazon’s Alexa, etc.) EDIT: 9/10/16 updated some key info not mentioned in the install links I’ve started this not because I know a bunch about CoRE (Community’s own Rules Engine), in fact it’s quite the opposite. Instead I’m just pulling together some helpful tips which got me get started and got me up and running with this outstanding rule engine for Smartthings. There is a lot info out there mainly designed to help people do amazing things with CoRE, but it was hard to find the “for Dummies” type info. And very hard for me (a true noob) to get started. Hopefully this post will help others who may not have ever added a custom smartapp to the IDE or maybe never even have had to log i…

For instance. when I come home I have a light that comes on for me great, However I cant seem to figure out how I can have that light shut off after x minutes. Seems like it would be in the smart app but no go there

It is there in Smart lighting. The same rule you use to turn it on, scroll down to power options. Turn off after X minutes 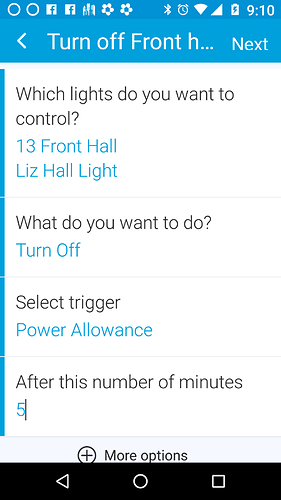 It’s actually set to turn on in routines so when I arrive home the light turns on. Didn’t see anywhere in there to set to turn off. Ideally I would like it to slowly dim down for about 30 minutes till it shuts off unless the switch gets turned on in which case the dimming stops

That’s exactly what I want Dustin. Now I just gotta understand how to use CoRE better to make it work. Only addition I would like is to cancel dimming if switch is engaged by someone manually

Dimming over time can’t be done with stock SmartLighting, you would need to invest the time & effort in CoRE.
If you look at the screenshot I posted, it is it’s own turn off rule in SmartLighting. So regardless of whether the hall lights were turned on by I’m home routine, door unlocking, motion on porch or in hall, door opening it will turn lights off after 5 minutes.

I believe there is a way do cancel it based on that but I have not dug deep enough into it to figure it out yet. There is a CoRE peer assistance thread on the community boards. I don’t have the link for it right now, I am on mobile.