Just starting to get into the ST scene. One of things the wife wanted to monitor was washer/dryer status. We have a gas dryer, so it works on 110V, and the washer is obviously 110V as well. I did some testing, and the vibration sensors don’t work that well since we have fairly new models, and they don’t vibrate that much. However, I was able to determine that we can use wattage monitoring since the units completely shutoff when they are done, and the power draw is lower than the idle draw when it is in between cycles.

That said, what is the best way to monitor both of these at once? I would really like to replace the non-GFCI receptacle with . . . something . . . so that I’m able to monitor power draw and kill power to the washer if a leak and/or frozen pipes are detected. Unfortunately, the Z-wave receptacles look to only control one outlet, and it looks like they can’t monitor wattage either. I also looked into a dual relay control, but can that do what I want? Is there enough space behind a standard single gang outlet for another box like that?

As it stands now, it looks like my best option is simply to get two of the old school DSC06106-ZWUSs since both could connect at once to the same outlet. It wouldn’t be pretty, but at least it could work. It looks like their new versions like the Smart Switch Gen 6 are much prettier, but they are flush to the outlet, and it looks like only one can fit, so that wouldn’t work for me. Any suggestions?

That’s what I did. I have the same setup as you and I didn’t want anything permanent. It actually doesn’t look that bad.

Enerwave announced exactly what you are looking for at CES 2016. However, you’ll need to use a GFCI or new combo afci/gfci circuit breaker or have a gfci switch upstream of the one you are installing.

Interesting, thanks for the info. I assume it is this you are talking about? Can you explain how it is different from the current model? It’s a little unclear to me.

It isn’t clear but I don’t think the old one measures both outlets independently for energy monitoring. From the docs it appears that it just does the entire outlet, however it is not 100% clear.

Interesting, thanks for the info. I assume it is this you are talking about? Can you explain how it is different from the current model? It’s a little unclear to me.

The old model measured and controlled one outlet. The new one monitors and controls both (correction: only the lower outlet). There is also a 15A version if I recall which would be more appropriate (and code compliant depending on your circuit wiring ?) for your use case.

The old model measured and controlled one outlet. The new one monitors
and controls both. There is also a 15A version if I recall which would
be more appropriate (and code compliant depending on your circuit wiring
?) for your use case.

Good to know. From how I read it, it looks like it can only control the bottom outlet though. The top is always on, and it looks like the difference to me is that it can monitor the power usage of top outlet as well whereas the old version could not. Still, that would completely work for me since I only would want to kill the washer if a leak is detected. I wouldn’t need to do anything to the dryer–just monitor the power.

Does anyone know how quickly Enerwave is to market with their CES announcements? It looks like they have been going and announcing Z-wave devices for some time now, so hopefully someone can comment if we are looking at weeks, months, or a year away.

Considering it’s not approved yet, I’d say at least three months. Six months wouldn’t surprise me. A year is possible.

Good catch on the top one being always on — I misremembered the press release I read a while ago. =)

I am using this currently for my washer. 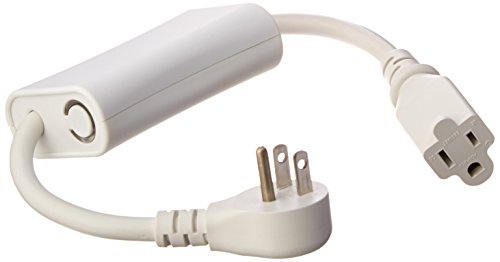 No reason you couldn’t use one for both washer/dryer. at $30 each will be about the same price as the outlet probably.

What device type are you using?? I just got mine setup but the reporting is the pits. So far the best I can get is a report on current wattage every 2 minutes…