I have some low voltage wiring with a key-switch in-line that tells a mains-powered motor whether to go up, go down, or stay still (i.e., off). The key-switch is a total pain in the neck. I mean, really, who can ever find the key?

So I’d like to replace the key-switch with a zwave single-pole dual-throw (SPDT) dry contact relay. Everyone I’ve spoken to so far suggests a dual relay. But I don’t want two ST things: one that’s up/off and another that’s down/off. I find that inelegant and kinda pathetic

. I just want a single up-off-down SPDT thing – like what I imagine a curtain controller looks like.

Anyone know of a dry contact SPDT relay for ST? Or some way to accomplish the same?

What does this operate?

Would this be what you’re looking for? 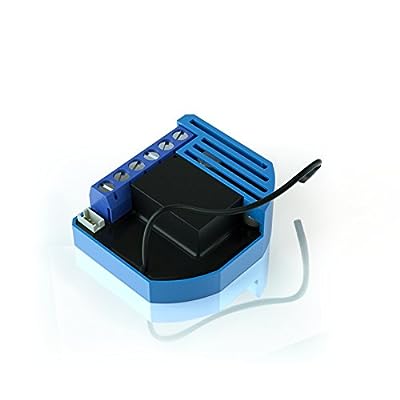 I was afraid you’d ask

In the latter case, I used a dual dry contract relay and it works fine. But I have two ST things–one for “TV up” and one for “TV down”. Ick.

JDRoberts, btw, I made a bet (with myself) that you’d be the first to reply. I win!

Hey Ryan, thanks for the idea. I read the specs, but I can’t find anywhere where it says that it’s dual pole. Am I missing it?

I’m slightly confused. You are saying that the switch is in either one position or the other, not a momentary close to command it to go up or down? Because that doesn’t make a whole log of sense. A SPDP would apply current on one side or the other 24/7, not sure momentarily. Are you saying that’s how the switch in your setup works? In that case, no this would not work. But you could do the same things with 2 of them and then have ST switch one off when the other is switched on. However, I would be very cautious about ripping out a switch from something without being 100% sure that the wiring is the way you think it is.

From my use case, I would strongly prefer a momentary SPDT, but I could live with a latched one I suppose.

Please feel free to correct me, as I am not an electrical engineer; I just play one on television (and in my automated home).

I have this one and it works well.
https://www.amazon.com/Wireless-Z-Wave-Multi-Input-Output-Contact/dp/B00B6RZ7MM

Yeah, those are often called on/off/on switches, where the Switch rests in the middle and Up turns the motors one way and Down sends it in reverse. These are often momentary for safety reasons. The motor only runs for as long as you are holding the switch out of the center position.

Pretty much by definition it is SPDT as there are two throw positions.

We just had a thread in the last couple of weeks for somebody who wanted one of these, but I am super tired today and I don’t remember exactly where it was. I’ll see if I can find it later.

You may be confusing people a little bit, though (and this may have been what @ryan780 was referring to) as these aren’t typically relay switches, especially if they’re momentary. The longer you hold it, the further the door moves, for example. But is soon as you let go, it drops back to the center off position. It doesn’t stay where you left it. They aren’t tri-stable.

This is the problem…I don’t believe relays are considered SPDT or SPST. A relay normally has 3 connections, the com or common and the NC and NO which is Normally Open and Normally Closed. Like the name sounds, when power is NOT applied to the relay, it connects the NC contact to common and when it is applied it switches to the NO contact to common, disconnecting the NC. That’s a relay circuit. What you are talking about is a specific type of switch that has 3 connections, so that you can switch between A or B. This is the best diagram I could find quickly.

So, what you really need to describe to us, or find online, is what the current switch you have is actually doing electrically. When you flip the switch does it remain latched or is it momentary? Is it an On off On SPDT switch? If so, I can’t think of anything that would accomplish that. What you could do, and this is ONLY if the switch is actually a SPDT On-On switch is to connect the down position to NC on the relay and the up position to NO. This would mean that when the relay is powered off, it would go down and when you turned the relay on it would go up. But, that is ONLY if it is latched and On-On. If it is momentary, your job becomes a LOT easier.

If you should wire it up the way I said and the current switch is something other than an ON-ON SPDT switch, its possible that wiring it this way could burn out the motor, the control board or both or start a fire. So…you want to be 199% sure before you start monkeying with it that you know how the current switch works. I would suggest some time with a multimeter would be in order.

The mimo can be set to momentary or latched. In a way it can act like a SPDT switch. The user manual is here: https://www.fortrezz.com/support/#User-Manuals

It still only provides one contact though if set to momentary. If you want two momentary contacts you would need two devices. Otherwise, it would act like I said…a SPDT ON-ON switch. Not a SPDT On-off-On switch.

That is correct there would be no way to have an OFF.

OK, here is the thread I was thinking of, it discusses the use of SPDT momentary switches with a micro.

I have no neutrals in part of my home, so I plan to use Fibaro Dimmer 2, model FGD-212 for those locations. Can anyone recommend a momentary switch I can connect to the Fibaro Dimmer 2 that would allow me to control the dimmer level (both up and down) at the wall switch (like I’m able to do with the GE Z-wave 12729 dimmers)? Thank you!

Yeah, that’s not what he’s looking for. He’s looking for a dual switched relay…not a SPDT switch for the control side of the relay.

Gents, sorry for the pathetically slow response, especially given all the oh-so-helpful suggestions. I was overseas with limited connectivity. Any who…

@JDRoberts, what you are describing as an on-off-on switch is what I’m looking for. Your point about them typically being momentary for safety reasons is well taken. And I can now appreciate why my using the term “relay” was a confusing misnomer—that’s just my ignorance talking.

@Ryan780, so I checked, and the device is definitely momentary — there are three terminals — COM, NO, and NC. The way I currently have it wired is through a dual relay. It works fine, but this gives me two Things in ST — one for open and open for close. What I’m trying to create is a single Thing with a momentary up, a momentary down, and an off (which I suppose would be accomplished through the absence of any input). You mentioned that the job is a lot easier if it’s momentary, which it is. How do I make this happen?

@ehupp01, I’m using a dual relay right now, but as I explained above, it results in two ST Things — one for up and one for down. It works, but I’d much prefer a single Thing with up/down controls.

Seems like there’s a way to do this, but I’m missing something simple.

I’m confused… NC NO and Com are the terminals on a relay. How do you have this thing wired to 2 more relays? I just can’t picture what you are saying. Photos or a diagram would help.
Also, how do you know its momentary? You don’t state how you figured that out.

Disregarding for a moment the discussion of how relays and switches work, would this blind motor controller work for you? http://rollertrol.com/store/en/all/180-zwave-relay-controller-blinds-shades-window-openers.html http://rollertrol.com/z-wave-blind-motor-control-part1g You wouldn’t have continuous control of when the motor stops, but you can set time delays to always move it to a predetermined spot. They say it works with SmartThings and although I have not seen the interface, it seems like it would show up as one device with up or down functions. You wouldn’t need the motor relay interface, but only the trigger module.

He’s not trying to control shades and he already has a motor he wants to control. If you read the first post you will see:

So, I don’t think your motor will work for either of those.

Sorry this wasn’t clear…this is not a motor, only a zwave controlled relay. Two relays (actually three, but no need for the third in this case) controlled individually, but as one common zwave unit.

R1 and R2 would give the same functions as the existing key switch, R1 energized = up, R2 energized=down, neither energized=off, or equivalent to the on-off-on functions he’s looking for. Anything electrical can be connected to the contacts, doesn’t have to be a shade motor, however current handling capacity would need to be determined. (An additional 12 volt non zwave, high current relay could be added to up the current handling capacity.)