Dog door. Or pet door if you want to be PC about it. Iris has a dog door. It is especially “dog” or potbelly pig? because it’s huge or at lease medium sized. I’m building a frame for our sliding glass door and really want to install a smart dog door. The Iris one is really cool too. It is the ONLY device I cannot yet use with Smartthings that I envy. I would even consider an Iris hub just for the door but it’s too big for my Klee Kei anyway. Still though I see it in our future.

There is community created code that will integrate the iris dog door with SmartThings.

You can find this and other pet projects on the quick browse lists in the community – created wiki. Look in the project reports section for the “pets” list.

There is no ongoing work slated to make this happen, and it’s not present on any current prioritization list.

Thanks, @Tyler, for your honest answer!

Resources are always a problem for an engineering team. Been there, understand that

Right here on the forum you have engineering resources that would give you new DTHes and simple fixes for existing problems for free. No strings attached.

Of course, it would take someone’s time to vett the code, integrate it into your builds, and so on. Understood. But it might be worth it for cleanly developed code or “simple” bug fixes!

Many of us hope the code submission process will be opened up again so this might be possible. Or that you’d occasionally reach out to someone who’s work addresses a particular new feature or simple code fix for existing things…

Thanks for your consideration!

Thanks for the follow up. I do know the community developed DTH, but it only operates the lock/unlock feature. It doesn’t exploit the doors other features such as time in/time out and mode changing. I did not read about it before posting this so maybe it has been added.
Alas, it matters not as its no longer sold on the Lowe’s website. I’m surprised we’re not already into a 2nd generation of a connected smart pet door. I guess a connected feeder does make more sense than a connected door.

Thanks for the follow up. I do know the community developed DTH, but it only operates the lock/unlock feature. It doesn’t exploit the doors other features such as time in/time out and mode changing. I did not read about it before posting this so maybe it has been added.
Alas, it matters not as its no longer sold on the Lowe’s website. I’m surprised we’re not already into a 2nd generation of a connected smart pet door. I guess a connected feeder does make more sense than a connected door.

Did you have a chance to look at the quick browse list for animals/pets in the community – created wiki? Several people have created their own automated pet doors using a simple actuator, and there are project reports on those as well.

Those threads also have discussion of some of the other brands that might be integrated with SmartThings one way or another. But a lot of it comes down to budget. In order to make these safe, they usually require some significant safety features and many people aren’t willing to pay the price for those.

There is a little device that I love that I never found an alternative.

I was a beta tester to a Company that offered a power management solution, they don’t sell home automation, although both are quite similar sometimes, anyway they have a zigbee device that it’s awesome

It’s a simple zigbee plug but they have managed to put an ir blaster on top, so trough their app I can control my AC, with temperature, mode, swing, fan speed etc
I can also control whatever it’s plugged in, but the AC it’s just great

This is AC control in the app Does anyone know if there is something else like this?A

I haven’t seen anything exactly like that. Remotec does make a Z wave IR blaster which is specifically for use with air conditioners, and so self identifies itself as a thermostat which makes using it very intuitive. Quite a few community members are using it.

It is available on both the EU and US Z wave frequencies.

And here is the community – created device type handler for it. You could ask any follow-up questions in that thread since those are the people who are using it.

How do I have your app learn from my remote?

Another option is to use the Logitech Harmony Home hub. Again, available in both the US and the EU. However, that one is not as intuitive when it comes to air-conditioners. You basically have to build a harmony activity for every option you want to have.

Thanks, that seems that it’d do the trick if it wasn’t so
expensive

200GBP it’s 5 times the price of this plug, and I’d need few of them, but thanks

Thanks again. I will definitely check it out.

Because I’m quadriparetic and have very limited use of my hands, I pay attention to this device class pretty closely. I haven’t found any other low cost stuff other than some android tablets.

There are some made which are used in scientific laboratories and some other places where people might not want to be touching all the surfaces, but I haven’t found any way to hook those to smartthings, so it would just be a parallel means of control.

If you go all the way to gesture control devices, there are a couple of options. The Fibaro “swipe” is a gesture control tablet which functions as a Z wave device and can be integrated with SmartThings for 6 gestures. It’s very cool, and works well, it’s just that it’s expensive. $150. There are some community members who have it. This is one where moving your hand left would be one gesture, moving your hand right would be a different gesture, etc. it will be good for some people, but the cost is too high for others.

I do really like this video they put out for it.

Thanks for the info…just doesn’t seem like that difficult of a device, (close proximity detector), to make, and I can think of several uses.

I haven’t seen a specific close proximity sensor but I inadvertently made one once. I bought several of the Iris motion sensors a few months ago when they were on sale and buy 2 get 1 free. I wanted to try adjusting the sensitivity through various means in order to use outside. One of my tests was to try covering the center lens with different materials to lower the sensitivity. I tried everything from clear cling wrap to electrical tape. Some of the more clear items (wanna say like clearish scotch tape) reduced the motion sensor detection to like 3 or 4 feet or maybe even less. Since this wasn’t my end goal I didn’t pay much attention to which did what. It’s certainly something worth testing out for your own purposes with little risk as the sensor is cheap and tape won’t break it.

I’ve been to lazy to install it but in the end I created a snoot ie tube over the PIR sensor to create a very focused detection beam for the Iris unit. I just need to install it out front and properly aim it. The end game is to eliminate the repeated false detection’s the Arlo gives me out front and use this one some how to record front door video. I used some shrinkwrap for my snoot but may ditch that as I found the tube the little vials of superglue come in seem to be the perfect size. this way the whole thing is white and the tube is more durable than the shrinkwrap.

The Iris Keypad has a built-in proximity motion sensor that activates when you move your hand within about 6 inches of it. 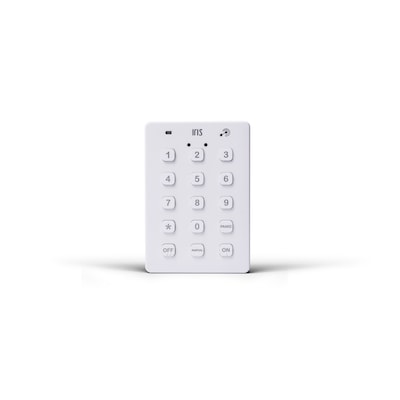 I am brand new to ST so I may be missing something, but one thing I just can’t find is a simple table top controller like I had back in the old X10 days. It would just sit on a coffee table and allow me to turn 4 different lights one. I see some wireless options and that would be ok, but they all look so gody. I am under the impression that a simple table top controller does not exist for ST. Insteon has a nice looking wireless 4 thing/ scene switch, but I want to stay in ST and not need another hub.

Have you had a chance to look at the buttons FAQ? That lists most of the options. ( these are usually called “remotes” in a smartthings context, not “controllers,” by the way) ( this is a clickable link)

That post you’re replying to is four years old.

Since then, the only ST-compatible device similar to the insteon fanlinc that I’ve seen is sold at Home Depot under their Hampton Bay brand.

Are you referring to a GE z-wave switch? Or a module that’s installed in the fan canopy (like the fanlinc or Hampton Bay module)? I’m not aware of GE releasing such a device.