It appears that the Blue Button for changing the Wi-Fi Network Connection of a Samsung SmartThings Hub, well, no longer appears in the current version of the SmartThings App

QUESTION: Is there a more elegant way to change the Wi-Fi Network on a Samsung SmartThings v2 and v3 Hub (than the additional Reset Button method outlined below) ?

You would select your Hub > Three Dot Menu > Information > You will see a Blue option for “Update Wifi Information”. This will take you through the steps to set up WiFI on your hub to allow the hub to be on the new mesh network. This is the same location where you locate the Firmware ran on the Hub.

Additionally, you can force a WiFi network change without factory resetting your hub using the steps below. Less than Ideal, but both methods will get your desired outcome of changing the WiFi to the new updated information.

Does anyone have any recommendations to change the Wi-Fi that my version 2 Hub is connected to?

v2 hubs only use an ethernet port. wifi was not introduced until the v3 model was released. (only referring to the hubs only and not Samsung Connect or hubs with wifi mesh with plume.)

As @jkp notes, the STH-ETH-250 (that’s a V2 hub) doesn’t have a WiFi radio. It can only connect via ethernet cable. So whatever router you cable it to is the Internet it will use.

Ahhhh… thank you both !

It’s been so long since I installed that v2 Hub, I completely forgot that it didn’t have Wi-Fi.

Thats available in my v2 , does the wifi version also have it 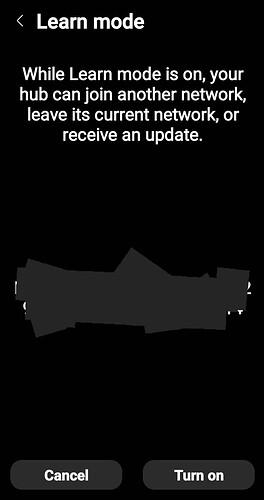 As noted in prior comments, SmartThings Hub v2 (STH-ETH-250) doesn’t have a Wi-Fi Connection to LAN.

To enter Learn Mode in my v2 Hub:

Tried the same steps in my v3 Hub:

Which brings up a question: How do you place the v3 Hub in Learn Mode?

Is it about joining another “Z-Wave” Network (as it’s found under Z-Wave Utilities) ???

The “learn” function is so that a smartthings hub can join another existing zwave Network in the role of a secondary controller. It doesn’t have anything to do with Wi-Fi networks, one way or the other.

The functionality is required by the third-party standard for any certified controller, but it doesn’t work very well with smartthings and only a few people use it for some specialty situations. 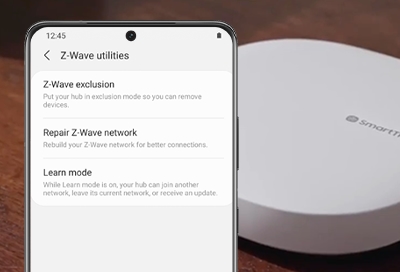 How to manage Z-Wave device issues with the SmartThings Hub

Like most of the app, it needs better wording, warnings and an on screen explanation of its purpose