I am in the middle of a total house remodel and was fortunate enough to run CAT6 for my doorbell. It looks like the Ring Pro, SkyBell, etc all use WiFi. Are there any consumer smart doorbells on the market that can use a hardwired internet connection? I’ve got a strong wireless network (1 controller and 4 802.11AC access points) but I’m old school and prefer a cabled connection. Any help would be appreciated.

Unfortunately it looks like folks building these things prefer to support 20th century tech. Can’t blame them as they would be limiting their market if folks needed to run new wires to their doorbell to use their products.

But I built my house in 2001, and still ran cat5e to the doorbell locations (which currently use a single twisted pair for Doorbell Fon units). I would love something that uses POE for power and communication… and have been waiting patiently, but looks like I’ll need to RasberryPi something together for this.

While it is certainly a bit more effort, there is a lot to be gained by not have these huge, surface mount monstrosities bolted to your wall, and the ability to use external cameras that can be located in better areas.

I’m right there with you, I live my Ring Pro but I absolutely hate WiFi in general. If it has an Ethernet port I will always try and find a way to wire it rather than wireless.

A professional-grade solution with power over ethernet, a flush mount and a sleek design. Includes 4 interchangeable faceplates.*Professional installation requi

I’m right there with you, I live my Ring Pro but I absolutely hate WiFi in general. If it has an Ethernet port I will always try and find a way to wire it rather than wireless.

The Elite!!! That’s the ticket.

Let’s hope it’s shipping by the time I’m ready for a doorbell. Thanks for the tip!

I’m doing something wrong in life because my wife would look at me with the eyes of death himself if I even thought about buying a $400 doorbell.

I still can’t believe that there is not an app that works like a ring but with just an ipcam that has 2 way comms.

If button is pushed, then start video monitoring app that has an unlock door button.

Well… that seems to be exactly what I was waiting for, but for $500 that’s just crazy! What could possibly justify this being twice the price of their pro version? I can raspberryPi it with multiple external Hi-Def cameras and motion sensors, and way more as I have two doors to monitor.

What could possibly justify this being twice the price of their pro version?

Mostly the market and probably the addition of the PoE hardware. It’s more aimed at commercial installations I’d guess and commercial equivalents are just as expensive I believe. What it doesn’t say is if it can operate a lock/solenoid which other commercial ones can.

That being said, the app and everything does make it nicer to use, $350-400 would have been easier to swallow though.

I’ve seen a lot of tutorials out there for DIY smart doorbells that involve the rasberry pi, I found this to be the cheapest and most straight forward. Its a crude setup but an easy one none the less. With some extra work you can get video and two way audio.

Smart doorbells are an amazing tool but still an expensive one (~$200)! Today in this Instructables, we propose to help you build your own smart home doorbell for... 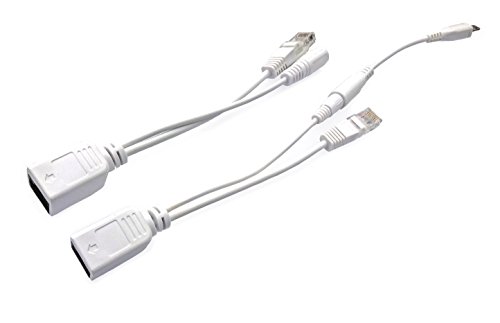 Power your Raspberry Pi - or any micro-USB powered device - over ethernet with this passive* PoE injector/splitter cable set. Just hook up your power source and ethernet (LAN/WAN) to the injector cabl ...

Mostly the market and probably the addition of the PoE hardware. It’s more aimed at commercial installations

POE is a couple of bucks at best, and commercial installations wouldn’t dream of using a proprietary cloud interface from a small startup. So if that is their market they are in for a rude awakening.

Still does not seem to be any indicator on the web site that justifies twice the price of the current ‘Pro’ model, but I am curious.

So I found this (https://www.doorbird.com/). Does anyone have experience with it? Looks interesting because it has an API and it supports http pulls. May be a bit more customizable but not as polished as the Ring Pro?

Me too, looking for a hard wired network video doorbell. I have a metal front door and metal garage door, my router is about 8 feet away from the Ring, and the Ring reports that the WiFi signal strength is “poor”.

Apparently in the last year the industry woke up to this need–I found several PoE doorbell cameras that are now available (Aug 2018) on Amazon in the $200-400 range, including the Ring Elite ($400), GBF, Doorbird and a couple generics. I’m sure they’re available elsewhere too.

Yes they finally did., Just installed a Ring Elite I ebayed for about half off so far its working good and integrated int the Smarthings Ring App with live streaming

I don’t see the Elite as an option under doorbells in the app - how were you able to add it?

I added it as a pro.

Need more deets on the Elite! I’m a huge fan of the Pro and I’m building a new house so I asked for CAT6 down by the doorbell wire so I can choose either but it seems like the Elite is basically just a Pro… with PoE, which, don’t get me wrong, I’m ALL about POE-ALL-THE-THINGS! But at $400-500 it makes it difficult to justify.

I really hope they refresh the Elite and give it a significantly better sensor or something.

True, pricing is insane, at least they could have improved camera or smth. But it is on sale now ($349), so maybe worth it

True, pricing is insane, at least they could have improved camera or smth. But it is on sale now ($349), so maybe worth it

Seems like Doorbird and GBF are trash - only 720p.