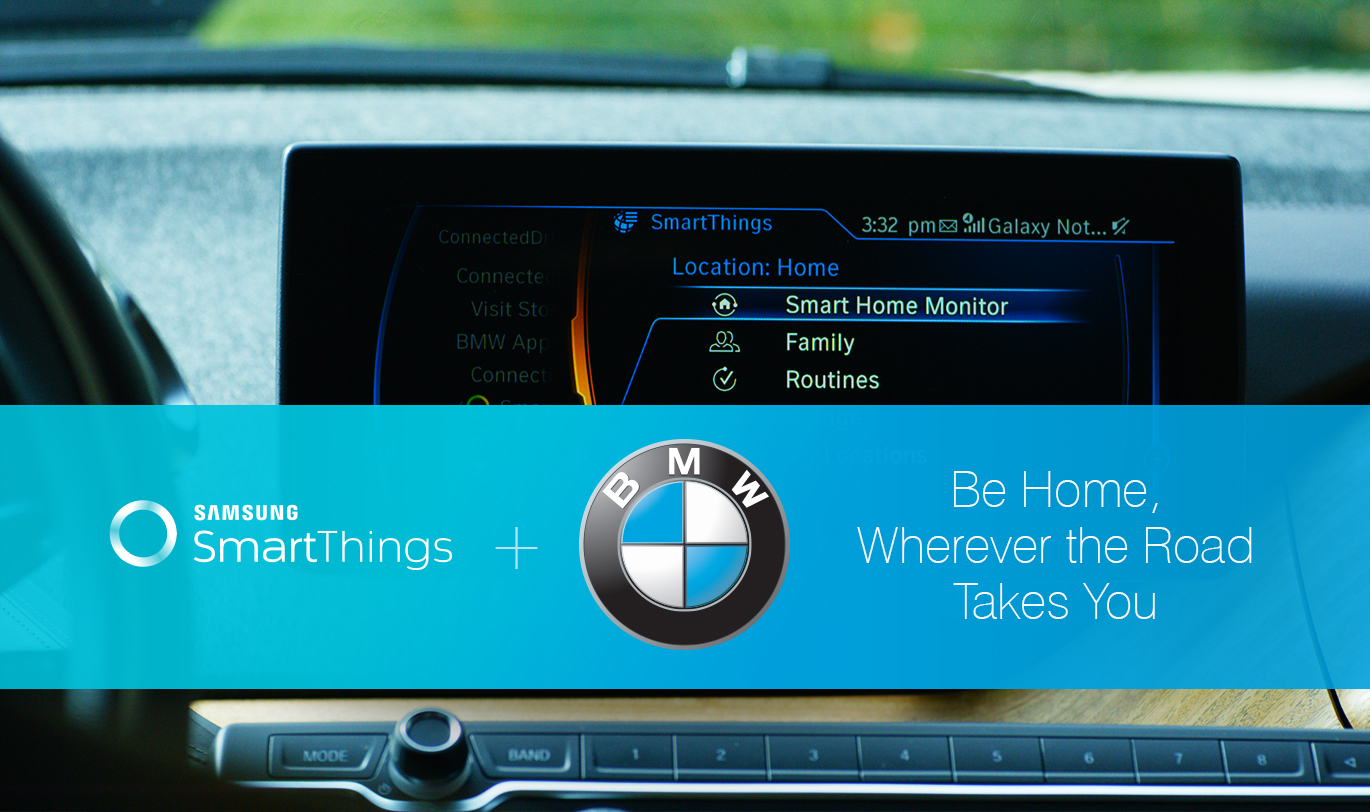 BMW can take you anywhere, and starting today, SmartThings can bring you home.

What are peoples views and thoughts? A well needed addon for the masses of users, or another distraction from stabalising the platform?

I was wondering what they had planned for the “bmwgroup” folder that showed up on my phone in December:

It’s an interesting time in the automotive tech world to be sure. Toyota just announced that they will be adopting the SmartDeviceLink open-source smartphone app interface (which underpins Ford SYNC AppLink).

A well needed addon for the masses of users, or another distraction from stabalising the platform?

Believe it or not, we have dedicated teams to work on projects like this. We don’t pull engineers off of Platform Stability to work with an automobile partner. When you see a new device integration it’s usually the effort of a lot of work from a small group of people who are dedicated to projects like those.

Hats off to them, im sure they have done a great job, im not knocking any individual who made this integration, its there job to do so and hey was told too and im sure they came through ontop . . .

Allocating any amount of team members to do “new integrations” when the platform is in such an embarrassingly poor and u stable state isnt acceptable, infact its a joke !!!

Its similiar to the monitoring for $19.99 a month announced in december, it was possibly the aingle worst decision ever in terms of timing, how insulting is it to your current users who cant even do day to day basic functions to see you trying to get more money in from subscription services to montior a system that is more tempremental than my girlfriend . . .

The fact of the matter is, the majority of your longterm community members are pissed off with SmartThings and there blatent lack of interest in the system but obsession with trying to build profits . . .

Its pretty much as simple as . . . STOP RELEASING NEW FEATURES BEFORE FIXING YOUR ENORMOUS ROSTA OF CURRENT ONES !!! It doesnt cause users to be excited, it causes even more stress on your staff as it pisses off all your current users.

Just what I need.

That’s not how an engineering business works. There are dedicated groups and teams for all different tasks. Just because you want to prioritize one task doesn’t mean you shut down all other groups.

As of right now, this platform will not hold your hand and do everything you want perfectly, it is a system which requires a lot of understanding of the risks you take when using it. If you push your home to the point where it just won’t work without the hub then you’ve brought it upon yourself. Discouraging the SmartThings developers for completing integrations and projects in an order that you don’t like isn’t being helpful in the least.

Not to mention in most cases the platform developers have a different skill set than the addon/module developers. Sometimes a different language or more advanced functionality. The best thing to do is to keep the core platform team small and focused in hopes that they don’t have 40 engineers checking in code and stepping all over everyone. With that said I have no idea if the underlining code is a true multi tiered application in the code to allow for this level of separation.

As much as I hate the system instability, there are many problems that throwing more people at won’t fix. There’s also people at companies that can’t effectively help solve problems due to their skill sets. For example, if the ST issues are due to server and/or network issues on their end, development engineers aren’t going to be able to help. So should ST lay them off in the mean time? Lord no!

I have trouble imagining a high end late model BMW owner sitting around repairing their Z-wave network, programming custom SmartApps in Groovy, and and bitching on these forums about how the ST web admins don’t know what “five nines” means.

Connected drive ran out on my 3 series earlier this year. Getting my 420 in a couple of weeks and ecxited to see how well this actually works

So I updated my SmartThings app to 2.0.7 and was surprised to find this doesn’t work with the BMW Remote app (wifi/LTE) you need the BMW Connected app which requires the phone to be plugged into the car via a wired USB connection (how quaint). The car appeared to install the apps from the phone into the Connected Drive menu system and it looked like it was somewhat working. You just get the SmartThings Smart Home Monitor and Routines but no direct access to Things. And you get a menu called ‘Garage’ with nothing in it. Not sure what that is supposed to do, I guess it’s something to do with BMW?

But the connection was up and down more than a *************. Each time it reconnects it appears to reload the apps from the phone into the car (takes time). Sometimes it doesn’t connect. Sometimes it just crashes. Sometimes it works too! But it’s not something I could rely upon at this stage. Let’s hope it improves with future software releases. At this stage it appears more proof of concept than a useful tool.

I tried it last night and I couldn’t find a way to add the BMW as a Thing in SmartThings. Although I didn’t try it when the phone was physically connected to the car via USB. I must try that (see other post).

It doesn’t need to be a high-end BMW, any recent model BMW with Nav will work, they all have Connected Drive. Tested it with the wife’s 2015 320i last night. And I have a 2016 328i arriving later this month. We have a mixed SmartThings/Z-Wave, MyQ and Insteon home (still working on integrating that with @pstuart’s & @tslagle13’s Groovy Insteon code). Such people clearly do exist!

I have a 2010 BMW 328, so I missed the boat by a few years. That being said, watching the video, I am not sure how much I would use it. Everything shown is all automated already by me utilizing modes, presence sensors, etc. It’s also much easier to use a widget on my phone in my holster in my car, then going through the iDrive menu to perform actions. The one thing I would like though is the "Things’ functionality where I can control certain aspects of my car from Smartthings such as starting it, locking it, etc. That would be cool.

If your community leaves Smartthings because it is really only for hobbyists and developers new integrations are irrelevant. Your marketing suggests that this is for the everyday user. Your comments seem to contradict this.

Fully agree. I did not see much in the video that I can’t already do. When I am driving home I don’t want to have to find the interface in my car to turn on the lights. They already come on with the presence sensor. When it works that is. So far it is a 50/50 thing.

When posting this I got the message “sorry a message has occurred” - Love it!

The best part of automation, is AUTOMATION. I have my smarthome fully automated, from locks, thermostats, blinds, lights, etc happening automatically. I very rarely actually control “things” from my smartphone unless I am troubleshooting something or it’s an out of norm action I am taking which happens occasionally. I find a lot of the automation being advertised as far as integrations are very gimmicky such as this BMW one. I would love to have it, but I would rather have CarPlay in my car which will help with emails, sms and navigation safely when I drive. When I buy my next car which I plan on doing in 2-3 years from now, one of the key features will be the operating system, not the home automation features.