No SmartThings integration yet but a there is a chance for that and/or IFTTT. MySmartBlinds kickstarter finally shipped. Easy as pie installation. The first one took a minute to figure out. The next 3 retrofits took 3 to 5 minutes each.

The Android app setup and sunset sunrise based time shift schedule is simple. There is a user account and signup so C2C integration seems possible. Manual control within the app is fine, but I notice when I control on the main app page they don’t move in sync. If I go to the room control with a slider for partial open/close they do move in sync. There’s also options for stick on wall switches and a usb device to trigger open and close when your TV goes on/off. Those parts are not shipping yet. And for manual control just pull on the manual switch where your old cord or twist rod are attached after retrofit.

This kickstarter shipped a year late but they delivered good quality. The noise isn’t as bad in person as it sounds over video but one would think these could be quieter. The USB cables still attached to charge the batteries overnight since I didn’t get the solar panel option.

These use BLE devices. If SmartThings v2 hub BLE radio is enabled and they integrate with MySmartBlinds, then I might finally do my migration to hub v2… Not holding my breath.

Awesome! Waiting to get mine, haven’t gotten a ship notification, if someone can integrate these into Smartthings too that would fantastic.

Are they filling in kickstarter orders only? I would still consider them vaporware until I can get them from Amazon or Best Buy…

As far as the BLE business goes, you can probably try and hook up with someone and come up with a gateway that can talk to ST via HTTP or something, and that can talk to the blinds via Bluetooth somehow. Similar to a few other projects that are around to circumvent some of the limitations of ST.

Nice…like to see some updates on this once more people get it. I would agree it would be nice to get this on Amazon so if there are issues, it can be returned. Since it works on bluetooth, wifi integration doesn’t seem to be a reality unless there is some retrofit kit they add later. I would what the account is for since the cloud won’t be able to talk via bluetooth unless the device (phone) is physically at the location.

I’ve retrofitted 10 blinds since they shipped… overall, very pleased… good product… these eliminate a daily process of opening and closing blinds around the house, which is primarily why I do HA… the initial firmware updates have been a bit of a pain from the Android app… their a little bit loud when moving fast, but it’s reasonable… when they are scheduled to run, they move slowly over a 5 minute period, so you can barely hear them…

To complete the vision, I really hope they can bridge their Bluetooth interface to the cloud so that we can really automate them… easiest path that I see for them is to adapt their wall remote into an AC wall adapter with WiFi support (so that it is always connected) and then create a channel on IFTTT that gives all automation platforms an integration point.

Biggest bugbear right now is the manual switch…it’s lousy. It’s a poor physical design that doesn’t fit properly into blinds that have cutouts through the corner of the top unit (front side and bottom) rather than merely a hole in the bottom. On top of that, no matter which way I twist the thing it only moves the blinds in one direction. Not ideal.

I can’t wait for an integration too. Didn’t know there was a manual switch where is it??? But so far loving them.

Does anyone know some reasonably priced blinds that specifically work with this bluetooth-connected kit? It seems when I ask support sites if they will work with this thing, they are quick to try to sell me a $400+ kit that does almost the same thing as this $99 kit. (In other words, the 2 companies I contacted said “nothing works” with this thing.)

My smart blinds emailed this to me today.

“Use code CES15 on your next MySmartBlinds.com order for 15% off. Limited time only.”

Looks like they may have an ST compatible BT hub for the mysmartblinds smart blinds some day.

So it’s been a while now. For those that have had these (specifically with the solar) what’s your overall opinion? I could honestly do without it being connected to ST for the time being, as long as I could put them on a schedule. Anyone ever figure out how to get these connected to ST?

Don’t have solar and no ST connectivity.

Pros: they open in unison at 7:30 am every day and close in slow mode 30 minutes before sunset every evening. I charge them maybe every 6 to 8 months. Usually because one blind exhibited odd behavior like didn’t open or closed in the wrong up/down orientation and disconnecting and reconnecting battery didn’t seem to resolve.

Cons: MySmartBlinds never got the Android app working to run firmware upgrades and fairly unstable for other usage. Problem solved when kid got an iphone. One newer blind upstairs added much later can’t seem to upgrade to latest firmware even with the iphone but doesn’t seem to matter for functionality. I’ve tried a few times.

Received the add-on remote buttons/switches from the kickstarter maybe a year after the blinds. Setup ok but never use them since simply want the blinds closed by dark.

Overall, compared to ST issue frequency and other kickstarter gadgets, the blinds are mostly fine to the point I forget about them for months. Fairly happy since I want my automation to be like utilities, forget they are even there with no need for switches or cumbersome manual anti-automation voice control.

Are they as loud in operation as your video makes them seem? In the “slow open/close” mode, how loud are they?

The video seems to amplify a bit, but noise is there. In slow mode the motor is unheard but there is a little popping sound from the turning metal rod and cords on my old blinds. Just a little bit.

They were supposed to have the hub listed on Kickstarter on Monday, but that didn’t happen…now they say it is coming soon…Wonder what’s happening with it…

That looks pretty much like a Hue Bridge if you ask me.

Their new Kickstarter campaign is alive.

They have the hub (beta) for $40…and some of their other stuff at a discount, too…

Here’s the link to the live kickstarter campaign: 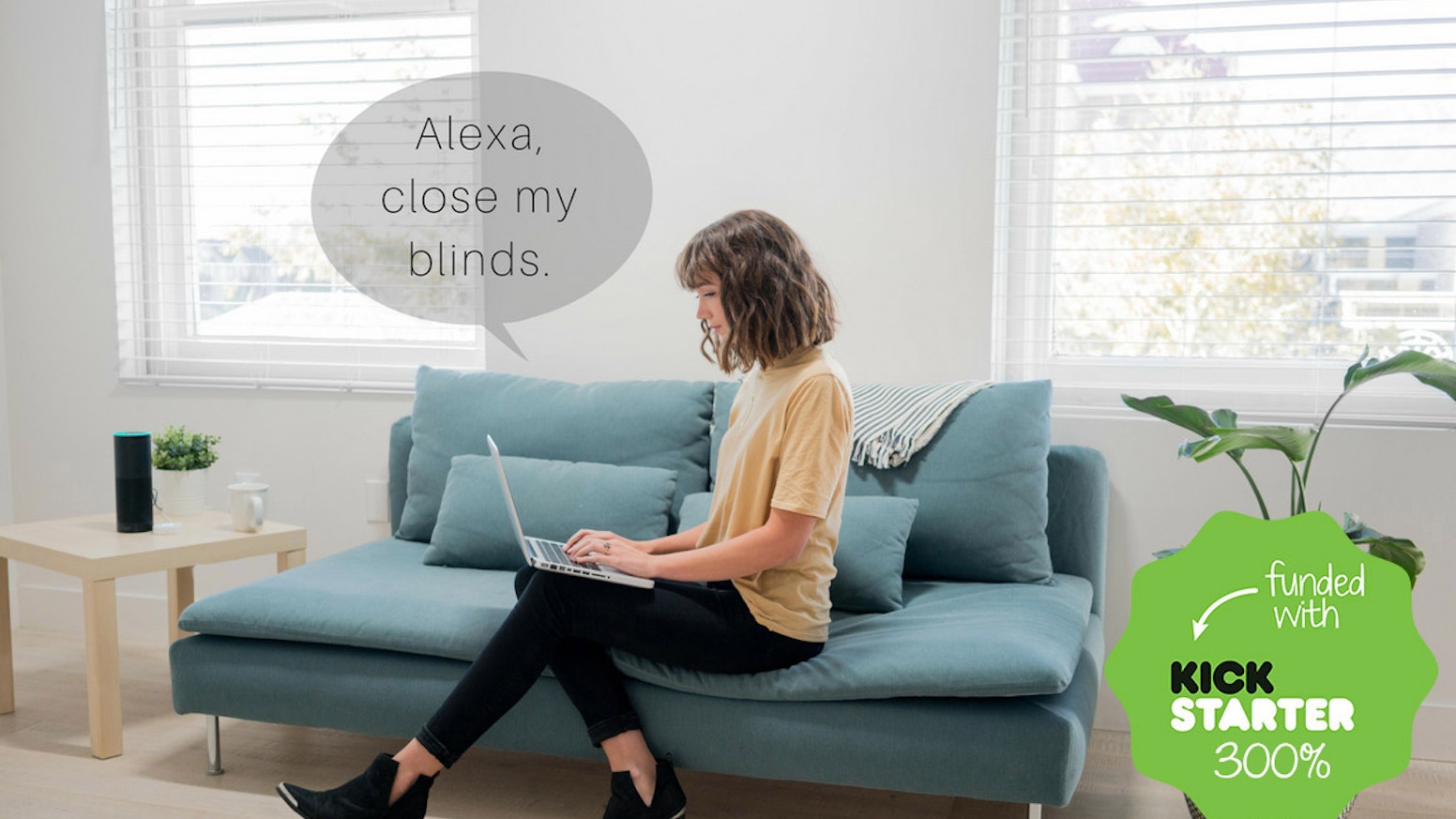