I made few automations - joined switches to turn on and of lights from different position in my house.

So is it possible to do a delay (like few seconds) or that the second accidental to fast touch to the switch is recognised are accepted by the hub after 2 ore 3 seconds?

Brand and model of the switches involved?

This is one of those issues where there can be a lot of engineering built into the switch itself to address this problem, but very cheap switches Don’t usually have those features.

Most common is something called “debounce” which is used even for dumb switches so that if someone accidentally taps twice, the light doesn’t turn on and turn off again immediately. but it’s especially an issue for smart switches because of the loops that you are seeing.

Many of the better brands do have debounce logic built in. I know that some of the very inexpensive Tuya devices do not, and these are the ones which have most commonly been reported as having a looping problem.

So first question: Brand and model of the switch?

First rule of home automation: “the model number matters.” Zemismart sells a lot of different devices. Which ones specifically? At the very least, are they zwave or Zigbee, because if they are Zigbee, they may well be some of those cheap Tuya switches I mentioned.

The following thread discusses the same problem. The solutions given there won’t work specifically for you, because they depend on the old architecture, but the idea is the same: you would have to find someone who has written an edge driver that will debounce the switch. It’s not impossible, but it’s not that easy either, and it’s just an issue with those particular models and the way the manufacturer designed them.

Hey guys! I’m using the mirror behavior function is the smartlights app, but it s not working properly. I tried with two brand switches, but doing the same. So i want to mirror 2 switch to do the exact same function (turn on/off) When i set up the mirror behavior, it is working, they are working fast and good. BUT, when you press it a little faster, for example accidentally. The switches going crazy, and they going into an infinity loop turning on/off themselves. Please check this video, so you guys can see it: I tried with z-wave switches And tried with zigbee switches as well Is there a solution for this problem? Thanks Andrew

Some more details would be helpful. How did you “join” switches? 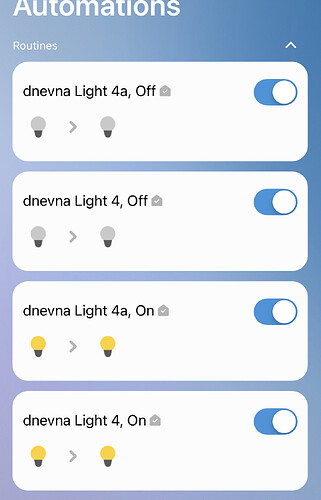 You can try changing the off routines from if X is off to if X stays off for 1 or 2 seconds, turn Y off