NB: This bug affected more than just Phone Number fields. I will test to confirm if the plain text fields SmartTiles uses for input of URL’s for Video Feeds and Off-Dashboard Links are also fixed.

EDIT: Seems fixed to me. I can’t reproduce the problem. Thanks!!!

Here was the original reported issue:

I have experienced this issue with every smartapp that I have used that has the texting option (SHM, Presence Alerts, Notify Me When, etc…). While I have not been able to erase the number, I have been able to replace a full phone number with just one number. Thus, effectively disabling the text messaging from the app.

Ouch, this update has some good and some bad…

Good:
-Text below icons at bottom, no more explaining to my wife and kids what they mean.
-Much faster, hasn’t crashed yet.
-Like the horizontal slider in multiTile for lighting, much easier to use.

Bad:
-MultiTile type “thermostat” is now just a “?” where before it “worked” without any extended functionality. This is a huge step backwards.
-Getting “There may be problems with your network” errors loading things view or marketplace
-Samsung SmartCam UI now has a gray box where the play icon was after pressing it. It disappears after a few seconds. (Might be a “stop” icon? but just looks like a gray square.)
-Main section titles were change to Italics? Renders pretty bad on my screen and hard to read.
-Buttons at bottom with new text are very fuzzy, look low res on my hiDPI screen.

Me too, and just submitted a ticket @slagle. Request #170379. Rest assured my network is doing just fine. 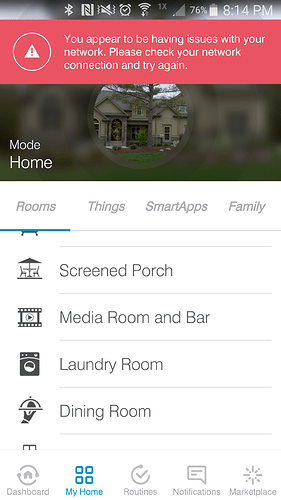 Wow it defiantly has some improved visual affects and performance, but seems to have new bugs.

-Samsung SmartCam UI now has a gray box where the play icon was after pressing it. It disappears after a few seconds. (Might be a “stop” icon? but just looks like a gray square.)

Confirmed, same issue with mine as well. Then I get the red bar of death.

So @slagle and @jody.albritton do you want us all to open tickets?

Well that’s a step in the wrong direction, no?

Why was this change made? It’s very confusing not knowing what Location is currently active in the App at all times…

Just to clarify, is that one ticket per issue in the new app or one ticket for each issue we find in the app?

Agreed, so where it used to tell me what mode I am in, it will now just show Mode Home (which is my location name?)

This seems redundant, since just above the broken spyglass space is the “My Home” which would be an ideal location for my location name.

can’t speak to the functionality and bugs that others are pointing out but I will say for a newbie still learning the labeling/formatting/etc make it easier for me to find my way around since things still aren’t second nature to me just yet.

Not sure i’m folllowing your question but mine says

so while i am awake it did say “home” but now that i hit my “goodnight” scene and flipped the note to night is says:

sorry for my ignorance- does “broken spyglass” mean its broken as in a bug? Or is that just a description to describe the visual?

I don’t have a mode “Home” so I don’t see what you see. The “Broken Spyglass” is a reference to the broken gradient circle on the image that just seems to take up so much valuable space. Thus I consider it broken.

Maybe this is tied to routines and not just modes.

gotcha- it is a big wasted space- i kavetched in an earlier thread myself- lol. It should do that thing (in android at least) where it scrolls off the page when you scroll down but as soon as you scroll back up it comes back.

Yup, and that is why I consider it broken… Works like that on iOS.

Tested new Android App on my Phone and Tablet and still cannot reorder the Devices (Things) in the Room view.

Yup. I even posted the solution to this earlier:

Yes, I don’t know why the “spyglass” image is static, because it’s not that way on the iOS version of the app. It’s called “parallax Navigation View.” Just look at the scrolling behavior of the Google Play Store app to see it in action. Tagging @Ben and @kris (these may not be the right people, but I’m guessing they know who is). C’mon SmartThings, this is a standard part of Android material design!!! http://android-developers.blogspot.in/2015/05/android-design-support-library.html

Says a lot of fixes, but why can’t we get reordering within rooms fixed, missed two updates in a row?

I still hate the fact that most sensor type devices still have no colored-graphical status, much easier if the same status graphics from the tiles are shown on the room and things pages, this was all good in version 1.