Aeotec Zwave ZWA008 3 in one Door Sensor with Dry Contacts

Aeotec’s new version of their door sensor, the ZWA008, is now available for sale at Amazon in several countries. This essentially combines the features of their previous dry contact device with their door sensor, but in a smaller package with full S2 support.

See the manual for a full description of the dry contact options.

Just purchased one as I am curious to see how it performs. The engineering specs make it look quite versatile…

I am not too happy about the 1/2 AA battery though… yet another battery to source and stock.

For those wanting more tech info:

Now… where is the custom DTH… ?

Thanks for sharing @JDRoberts, I got their email as well. It looks like a great device, but unfortunately I’m not needing any more zwave stuff now that I’m pretty much all zigbee with exception of just a handful of zwave stuff left. It’s kind of nice to know that I can move devices from ST to my Amazon Echo if I ever have the need to do so…

Got mine today. Due to its compact design it does feel a bit flimsy but I am guessing it won’t be an issue. You just have to be careful when you open it not to break any plastic parts. The battery is being reported at 42% out of the box… crappy battery? I am really not happy at the 1/2 AA battery choice… it is the only sensor I have that uses this uncommon battery so I am not happy to have to keep spares of yet another battery model… It is so similar to the CR2, they could have used that.

I tried installing a CR2 and it both fits and works. I believe a LI-ION version of the CR2 should also output 3.6V. More research and testing to be done…

I included the sensor using the new app. As expected the DTH is the basic door/window one that doesn’t support any of the fancy features of this device. I have not found a custom DTH so I might have to hack together one that can set the preferences. Once set, one can revert to the basic DTH if you want to have “local” response.

The top cover has 4 holes for wires… the design is a bit awkward as you have to thread the 4 wires (well 2 as I believe I read the other two are not usable (yet?)) through the holes, screw them in, and then slide on the top cover… did I say the whole thing feels flimsy? I can already see someone breaking it while trying to install it. We’ll see…

The Door / Windows Sensor 7 has the capability to work with an external DC power supply with 3.3 V.

Follow these steps to wiring your Door / Window Sensor 7:

Warning: Please pay attention to the polarity, an exchange of (+) and (-) can lead to the destruction of the device and loss of warranty.

Never operate the battery and DC adapter together. 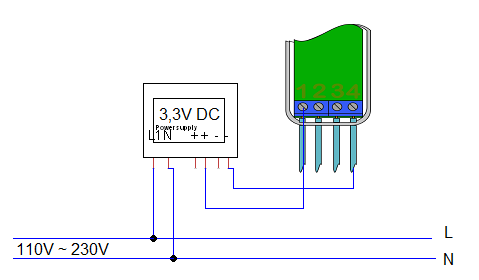 Did you manage to get a DTH working with the additional features?
BTW: I got mine today, and it arrived with a 14% battery charge. first time I’ve received an Aeotec device with that sort of charge… we’ll see if this special battery is worth the mess.

Did you manage to get a DTH working with the additional features?
BTW: I got mine today, and it arrived with a 14% battery charge. first time I’ve received an Aeotec device with that sort of charge… we’ll see if this special battery is worth the mess.

I have not had time to do anything with it.

With regards to the battery, mine also appeared to have a dead battery however after testing a CR2 for a few days and then reverting back to the one that came with it, the battery percentage jumped back up to 100%. Just checked it and it is still at 100%. When I get a moment I will check it with a DMM to make sure it is a correct reading.

Also, I spoke to Aeotec support and they said they’re working on a device handler. didn’t get an ETA yet.

Now if I can figure out how to use it. I think what I want to do … can’t be done. Hoping to use it as a small relay.

Unfortunately it isn’t possible, the Door Window Sensor 7 can only be used as a dry contact sensor, it can’t be used to control another device directly.

The Dry contact use of DW sensor 7 is used to detect dry contact outputs from other devices only.

Hi,
Is the tilt sensor supposed to show up as open/closed?

Based on the tilt attribute lines:

Do you happen to have a preference on how the “Closed” and “Tilted” status names are called? I can change the naming convention in the next update of the tilt sensor device handler.

I guess I’m not entirely sure what Tilt refers to in this situation.
Is it tilted based on some definition of “usual position”?

Also, these might be upcoming in the next/future version, but are you adding the tamper protection (or is the Tilt the tamper protection?), and I’m not sure this is the right forum, but the sensor includes something called “Spatial Intrusion Algorithm”, I was wondering what specifically that is and is that also going to be added in a future version of the device hander?

There are three kinds of tilt sensors Commonly used with smartthings.

One involves a ball bearing which rolls down a channel inside the sensor and when it moves it changes the state.

The second involves an accelerometer which is using XYZ coordinates, which uses vibration. Accelerometers have an initial 000 setting which based on their position when originally paired to the network.

The third involves a gyroscope, which is also using XYZ coordinates, but which uses gravity so that it always knows which way is “down. “

Aeotec’s is a gyroscope. I’m not sure where they patented it, but I would write to their support if you want to know more about their “spatial intrusion algorithm.” If I had to guess, and this is purely a guess, it has something to do with the Contact sensor magnet information being combined with the accelerometer to figure out if the window is moving in a way other than expected for normal opening. That would be your intrusion alert. But that’s purely a guess, and aeotec’s English translations aren’t Always idiomatic, so for all I know it could just be a gyroscope with a tamper alert.