So, I bought a second ST Hub (the current Aeotec one) on sale over the weekend. Given that my memory is showing full on my first hub, and I am planning to add another 20-30 devices (mostly light switches) as part of a house renovation, I thought I’d split things across two hubs.

I currently have ~130 devices, including virtual devices, and I’m pretty sure I’ll top out before I hit the 200 limit for the account.

Rather than just install it and start throwing things at it, as is my normal MO, I thought I might try and plan this one a bit before I set it up.

I am reaching out to the community for tips/ticks/best practices/things-to-avoid when adding a second hub.

I am leaning towards grouping related devices onto the same hub (i.e. whole rooms) rather than splitting by device type, in order to keep automations local.

Should I set the two hubs to different Zigbee channels? If so, how would I do that?

Any other considerations? Thanks in advance.

There is a limit of 50 edge drivers per hub, and you can run out of memory before that, so my own suggestion would be to split up the devices so that those using the same edge drivers are on the same hub.

On the other hand, as you mentioned if you are going to write routines involving devices from different hubs, even though they are at the same location, the transactions will have to go through the cloud. So that’s the alternative argument.

Both of those are just guidelines, so I think you need to consider both issues. What routines are you going to write involving which devices? And what edge drivers are those devices going to be using?

Of course, another option would be to put all Zigbee on one hub and all Z wave on the other hub. That would automatically handle the common edge driver approach. But I don’t know how many of each protocol you have, if you only have two Zigbee devices, that wouldn’t make any sense.

So those are just some things to think about, but it all comes down to the details of your particular set up.

Quick update. I put the second hub in and positioned so that I have hub about 25% of the way in from each end of the house. I have very cleverly called the 2 hubs “ST Hub North” and “ST Hub South”.

The original (South) hub is a V3 and the new (North) one is an Aeotec Hub, so essentially the same thing.

What a difference spreading the load has had

. Of the 130 devices I had on the original hub, I have moved about 1/3 to the new hub, along with re-creating the routines. It would be great if there was some automated way to move devices, but alas it was all manual. I have plans for a bunch of new smart light switches at the north end of the house and so left room for balance when all is done.

Now the South hub is no longer saying its memory is full. Whereas routines were taking painful seconds to initiate, they now fire off near-instantly (e.g. lights responding to motion). Device connection to each hub has been rock solid.

If anyone is having issues with a hub near capacity, I would recommend sharing the load with a second. It’s a bit of a pain and a time sink, but worth the results IMHO.

I’m running into the same issue only with less than 100 devices! How did you enroll your second hub to edge drivers? I cannot find where to do this in the app…any advice would be helpful

Go to drivers on you 1st hub.
Go to the channels section.
Log into a channel and both hubs should show up.

When I log into the channel for the edge drivers I see both hubs: 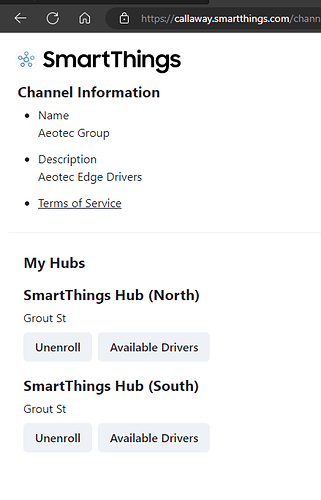 You can choose to enrol one, other or both hubs, and selectively choose which drivers are installed in each hub.

Here’s an example where I have enrolled a channel in only one hub: 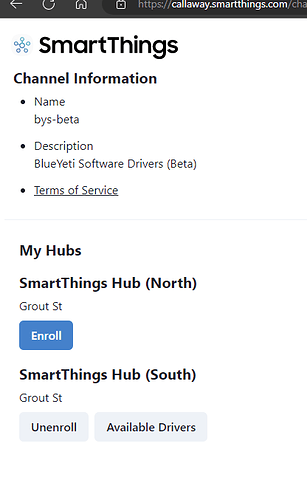