I have a kitchen receptacle (split duplex) that I would like to control one half with zwave and leave the other half always powered.

I don’t want to use a zwave receptacle as I would have to eliminate one of the lines thus limiting the amperage available for both sides.

Take charge of your home’s appliances with the miniature power outlet controller that offers immense power.

You have to be careful with those modules. The ones already listed in this thread are intended for control of lighting and only go up to 10 A. In most US areas now, an outlet must be able to handle up to 15 A or it will not be up to code.

I’m a little bit confused by the original question. Can you show us a picture of what you’re talking about? If it’s just a regular split duplex outlet, almost all of these on the market are already split with one outlet controllable by Z wave and the other always powered on. It wouldn’t take any additional wires, it’s how they are already designed.

For example, this one is popular. Half is controlled by Z wave and the other half is always powered. 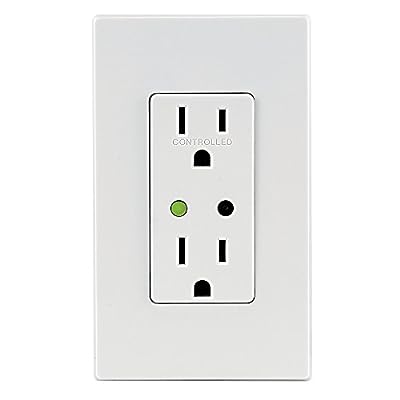 The Leviton DZR15 is a Z-Wave enabled 15a tamper resistant receptacle designed for use for most residential lighting and motor applications. A large range of load types are supported including incande ...

If you look at the picture closely, you will see that the top one has the word “controlled” on it and the bottom does not. That’s actually a separate code issue, as in most places now outlets which are operated by home automation are required to have an identifying Mark. This is so that if they were turned off from the home automation system and someone started working on it they would know that it might be turned on again. I know that seems weird, but it is how the code is written. So if you do use an in wall micro, you should also put an exterior marking on the outlet to indicate that it is now radio controlled.

And here’s a different brand. In this model, it’s the bottom which is Z wave controlled and the top which is always on. This model uses an indicator light rather than a word to indicate that it is radio controlled. 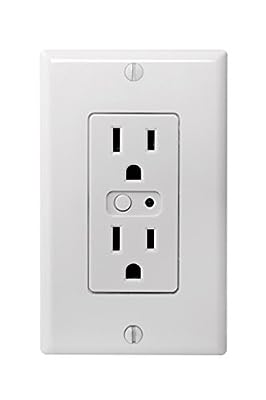 Linear is helping to make your home high tech yet also making it so simple to install and use! The Linear WO15Z-1 Duplex Wall Outlet is wired in place of your standard electrical outlet and allows wir ...

I guess a picture tell a thousand words… Not the best drawing but I’m sure you will get the drift.

This receptacle controls 2 higher than normal amperage appliances at the same time with out tripping the breaker.

I guess I should have mentioned that in the above drawing I only want to control 1 of the outlets via zwave & leaving the other hot all the time.

The only device I know of that could handle this electrical setup might not fit in your wall. It’s a zigbee dual load relay intended for control of pool equipment which can handle up to 30 A. You could certainly go ahead and wire both outlets and then just leave one of them always on. But I’m not sure exactly how the wiring would work, @Navat604 or one of the electrical experts in the community could say more. I know the device side but my wiring knowledge is limited to just enough to know when it’s time to consult the experts.

The Aeon Labs Nano Switch is the latest in-wall controller produced by Aeon and is rated for 15A loads. I upgraded one of my micro switches to the new nano-switch since I was controlling and outlet and wanted to make sure there was no possibility of overloading the controller. Judging from your drawing, the Nano Switch should work well for you.

You can find the ratings of the nano switch here. Have a look at the “US” row of the table. You are in the US, yes?

Put in a double gang box…Not that hard of a task, well, at least I don’t think so.

I have a kitchen receptacle (split duplex) that I would like to control one half with zwave and leave the other half always powered.

I don’t want to use a zwave receptacle as I would have to eliminate one of the lines thus limiting the amperage available for both sides.

Normally this type of circuit is on a 15Amp tandem (split, double) circuit breaker and it’s pretty much the new standard for new home except instead of 15Amp it’s now on a higher 20Amp breaker/socket. You are not the only person asking about this type of circuit on a smart plug. I usually couldn’t help when it’s on a single gangbox since room and wattage are the issues but look like the Aeotec Nano is rated high enough for your case and probably small enough to tug behind the plug.
Dual gangbox is the way to go but it’s probably not an easy thing in the kitchen due to wall tiles and the max number of sockets allowable per circuit so if you are going this route then check your local code.

The Aeon Labs Nano Switch… That’s the ticket jh0 Thank you very much. No worries about overloading that receptacle & wiring now.

My appreciation to all who have responded & helped me come to a conclusion on the issue I was having with that receptacle.
Thank You