What are my options for 20 amp light switches and outlets? currently im using Smart Things light switches (GE 12727) and outlets (GE Z-Wave Wireless Lighting Control Duplex Receptacle), however these will only work on my 15 amp circuits. I do see the Fan switch model: GE 12730 but I’d rather the small looking light switch rather than paddle.

Depending on what your circuit is for. You can swap out the 20AMP circuit breaker to a 15AMP breaker.

Thanks Ray, however the cabling that goes through that circuit is 12 gauge, if I swap out the circuit for 15 amp breaker, wouldn’t I also need to replace all the romex cable with 14 gauge? I was hoping to just use a light switch and outlet that is listed as 20amp.

Thanks Ray, however the cabling that goes through that circuit is 12 gauge, if I swap out the circuit for 15 amp breaker, wouldn’t I also need to replace all the romex cable with 14 gauge? I was hoping to just use a light switch and outlet that is listed as 20amp.

Guess it depends on your local / regional building codes.

IMHO, you can use 12 gauge wiring if all the outlets are marked 15 amp (i.e., all outlets on the circuit must not have the T cross in one pin).

There are a couple of possibilities.

There’s a 20A wall socket from Enerwave, ZW20R, which should work as an on off control. Just be aware that like most of zwave wall sockets, only one of the two receptacles is radio controlled, the other is just a regular always on receptacle. Unfortunately, it is no longer being manufactured and has become hard to find. And Enerwave has said they intend to put out a new zwave plus version, but had not as of late 2019. 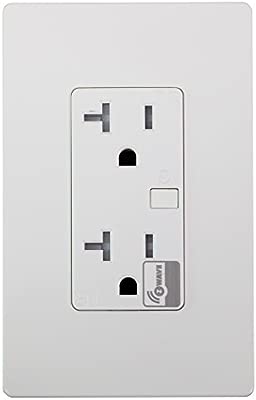 There’s also an Intermatic contractor module which can handle really high loads, but I think it would be overkill unless you’re looking at pool equipment or something like that. It’s also gigantic. 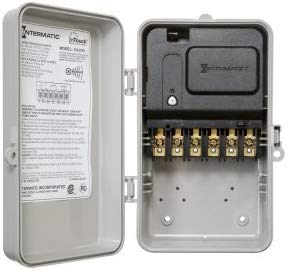 There are two fixture relays which would work for light or wall socket control. They would be wired into the circuit (typically at the light fixture itself). the zwave one is the evolve LFM20 which is on the official “works with smart things” list. it’s pretty popular in the community.

The second is A zigbee relay, also on the official compatibility list, from smartenIT. Intended for pool and pond equipment. Much smaller than the Intermatic, but also limited to a total of 30A between two circuits. But you can just wire it as one. This one will act as a Zigbee repeater.

Both the relay devices are on the official compatibility list:

ConnectSense has a nice UL rated in wall 20 amp receptacle with two independently controlled sockets. However, it was designed for HomeKit and the only integration with smartthings would be by using Alexa as a “man in the middle.“

20A inwall Outlet (HomeKit or Alexa, no direct ST) from ConnectSense

Currant has said they are working on one, but no timeline yet.

I only know of one zwave light switch with 20 A capability, although there may be more. This one is a rocker though, not a toggle. It’s also really old – – generation 3 zwave, and we are now at gen five. HomePro ZRW103. It should work fine with SmartThings as a basic on/off switch.

So those are some options.

@Navat604 , who is a wiring expert, can say more about the wiring required for these. I just know the RF device spec sheets.

Thanks for your help all.

Looking forward to the day SmartThings introduces their own 20amp switches and outlets.
For the meantime, I will have to use these alternatives, or change my circuit based on Navat604 and Tgauchat’s comments.

Are the devices you are connecting to the outlet or switch drawing more than 15A? By code, you CAN use a 15A outlet on a 20A circuit. The logic is that since anything that plugs into an outlet that draws more than 15A requires the “T” prong, and the 15A outlet physically won’t work with this, you can never plug a 15+A device into a 15A rated outlet (without some hackery going on).

Unless you are daisy chaining like on a shared GFCI circuit, no?

Doesn’t matter since outlets, switches, etc. are all wired in parallel. i.e. Plugging in a 20A device “downstream” of a 15A outlet doesn’t cause 20A to flow through the contacts of the 15A outlet.

Im using it in my bathroom to turn on a basic 3 light fixture:

For over 20 years, Vaxcel International has been a premier supplier of residential lighting products. Our product offering is composed of more than 2000 items, ranging from builder-ready fixtures and ...

and it also a vent fan
model: QTREN080

I don’t believe its chained on a shared GFCI circuit, because when i turn the light and the fan off from the circuit board, I still have power coming from my single GFCI outlet

That’s typical for a bathroom. 15A devices will be fine and meet code. Have you taken the existing “dumb” outlets/switches out yet? I’d be willing to bet they are only rated for 15A. Outlets are easy to tell. 20A rated outlets have a T on one of the prongs like so:

Plugging in a 20A device “downstream” of a 15A outlet doesn’t cause 20A to flow through the contacts of the 15A outlet.

How does “chained” GFCI work, then? Just wondering…

I think my GFCI outlet in my bathroom is 20Amp.
All my lights in my condo are on the same ‘Light circuit’, they are using 12 gague wire, but im willing to say all light switches are only 15amp switches. I can check tonight.

Not much different other than a GFCI has a designated in and out. You would be hard pressed to find a 15A outlet (normal or GFCI) that isn’t rated for 20A feed-through. And remember, a GFCI trips due to Ground Faults, not over-current.

You would be hard pressed to find a 15A outlet (normal or GFCI) that isn’t rated for 20A feed-through.

That’s what I was looking for, thanks!!!

Just look for something like this (green highlight) in their documentation

I think my GFCI outlet in my bathroom is 20Amp.
All my lights in my condo are on the same ‘Light circuit’, they are using 12 gague wire, but im willing to say all light switches are only 15amp switches. I can check tonight.

Yeah, pretty typical. Sometimes it’s cheaper on the install side to use more expensive wire, but have less runs/circuits. But then us homeowners get pissed when one thing trips that circuit and we can’t see

inside because it takes out everything else!

Just to keep people from getting confused, there are no Z wave outlets that are also GFCI outlets. They are trying to accomplish opposite goals. The zwave Outlet has to always be powered on so that it can hear the next network command. The GFCI outlet is designed to cut power altogether.

This can make device selection for a Bathroom a little tricky. Zwave pocket sockets that plug into the existing GFCI outlet are the easy way, but not everybody likes the aesthetics. Depending on local codes, it may be possible to put the GFCI cutout upstream from the Z wave inwall outlet, but it can get tricky.

yes, thanks for pointing that out!

Anyone know of other options for receptacles? I couldn’t find anything so it may just be left to the other devices in this thread…