I am having a few issues with devices falling off my Zigbee network. These are mainly Heatmiser Neo thermostats. Before I shell out on a repeater are there any zigbee network analyser tools available and will they work with the zigbee sniffers available on auction sites like this or this
Within our BEMS software for the village hall we can view the network topology and see which zigbee devices are connecting to which other devices and I was hoping to be able to view similar diagram to pinpoint devices dropping off. Alternatively is there a way to view the topology through Smartthings or via an interface program. I am not looking to inspect packets thats way out of my knowledge

Zigbee is having a lot of problems on the platform right now. This is acknowledged on the official status page, and they are supposed to have a hot fix rolling out this week. 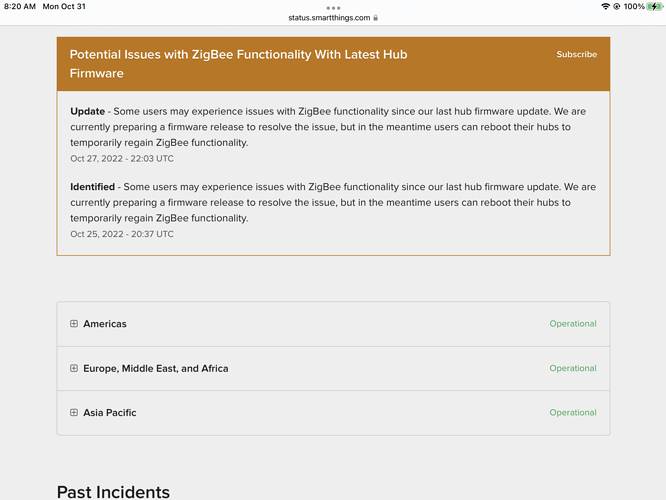 As far as mapping, there’s nothing I’m aware of in the official features, and the third party add on some people were using appears not to be working in the new architecture because the mapping device won’t add as a “thing.”

Hopefully if someone knows of a method they’ll post.

Thanks JD Roberts. That may well be why my Aurora kit has not been working.
Will await the update

I have the same issue with my Heatmiser Neo stats right now as well. Not sure it’s an ST issue as the stats are offline in the Heatmiser app?

I have a ticket open with Heatmiser.

Thanks Skinnypope. I would be really interested to hear what Heatmiser have to say. Could you possibly report back here their feedback? When I have asked previously they told me their system was proprietary but the installer who helped me set it up and has been working with Heatmiser kit for years, said it was Zigbee 3.0 so I am not sure who to believe. Not surprisingly it’s the stats furthest from the wiring centre that drop off and reconnect again. At the same time my Aurora dimmers relays and led controllers have also misbehaved. Thats why I am trying to find some software that can view the zigbee connections like or Village Hall BEMS attached. I would like to see if the Heatmiser Neos utilise the other Zigbee devices as a repeater? Fozzie 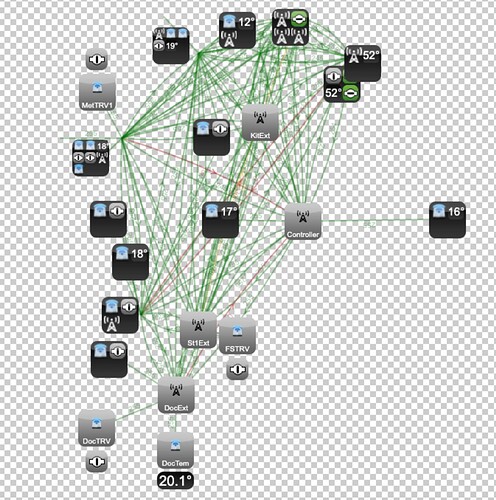 If you are using Heatmiser with a DTH connection to Smartthings the connection will be deprecated once Groovy is shut down, the original creator of the Heatmiser smart app has said he is not going to provide an Edge driver.

Thanks Mike,
I have not integrated Heatmiser into Smartthings for exactly that reason. I know it works for a lot of people but it seemed a bit of a clunky workaround to me that kept getting broken. I hoped that Heatmiser might adopt Matter and somehow integrate in the future. As for Heatmiser Direct Connection I was not even aware of the option, so thanks for that

Glad you found the option John, lets call it a silver lining.

I would very much doubt Heatmiser will adopt Matter, they are a very slow to develop company that refuses to allow integration into Smartthings

Only a minor update to say the initial advice was the standard hub reboot stuff, that was no use.

I then bit the bullet and did a factory reset and re-paired the stats. They now show up in the app, but I can’t control them or save profiles or anything via the app. I effectively have dumb thermostats that I can see but not control, except at the wall.

I’ve asked what Zigbee channel HM use, as maybe switching the ST channel might help, but I’m clutching at straws a bit here. I’ve also mentioned that I am not alone in having this issue just as ST have reported and “fixed” Zigbee issues, so I’ll see what HM say next. Might be worth you opening a ticket too?

Hi Skinnypope,
Thanks for the update, much appreciated. Until I posted here I was unaware of Direct Connection setting in the App suggested by Mike (Fido). Do you have this enabled in your App? I have found this setting and it’s already enabled so perhaps that’s now a default setting when installing or upgrading the App. I assume it is the equivalent of local control so that traffic between thermostats does not go to the Heatmiser Cloud. However I don’t quite understand how it works as the App presumably talks to the Heatmiser Cloud via the internet not directly to the NeoHub??
I have also found out something I was previously unaware of on the Heatmiser website:-
1. The neoHub handles all of the communicate between your thermostats and our cloud server. It communicates with the mains powered neoStat via a mesh network, they do not use WiF so your WiFi repeaters will not help.
2. The neoAir can join the mesh network but do not relay signals, so in a system made up of only neoAir you may require more neoPlug/Repeaters to extend the communication range.
3. The neoAir also communicate directly via 868MHz RF to the switching receiver.
This is different information than supplied to me by Heatmiser Support when I got them to help me determine the kit I needed to upgrade my existing Wirsbo (Uponor) UFH controls. It was inferred that all Neostats acted as repeaters!!
I only have two fixed thermostats. A NeoUltra in the bedroom corridor and a NeoStat HW in the boiler cupboard to control the Hot Water. The remaining 10 thermostats are all NeoAir. It could be therefore as I have a long rangy bungalow with lightweight concrete block walls and partitions that I was on the edge of Zigbee coverage and need a NeoPlug or Repeater and this only came to light around the same time as ST Zigbee issues.

So I fixed the issue…thanks to you guys!

HM gave me the Neohub Zigbee channel (channel 25 for those interested) which was different to my ST hub channel, so probably not an interference issue.

The “Direct Connection” was indeed the issue. I had it switched on, but the act of toggling it off and then back on (and having to push ‘connect’ on the Neohub) fixed it all. I guess it re-established the connection between my phone/app and the Neohub/stats.

The neoAir also communicate directly via 868MHz RF to the switching receiver.

Hmmm… if it’s using 868 MHz, it could be Zigbee, but it’s not a Zigbee that smartthings can communicate directly with, because smartthings uses the 2.4 GHz band for Zigbee.

868 MHz is primarily used in Europe for hvac systems because it meets some EU requirements on low power transmission. But again, it’s not a signal that a smartthings hub can receive.

so I’m thinking there must be a bridge device connection?