They did all of the spray foam insulating in each outside wall bay between the studs, as well as any wire/pipe openings between floors. They were very thorough… it took them a couple of hours.

I had no idea until a day or so ago that they’d do so much for you. I could have saved hours and hours of work.

I’ve sealed every floor and wall penetration I can find. I also sealed up all the rim joists in the basement, though I probably need to insulate them. I’d love to have someone insulate the walls though. I have a second floor room that’s above the front porch. It’s an ice box. I need some insulation in there!

I moved into this house in August. I’d like to get one winter heating bill in and some Ecobee data before I call them out. And I want it to be very cold so the thermal camera will show cold spots. . . .

want your utility company. I had them come in about 6 years ago and all I got was a couple CFL bulbs and a warning that the insulation ( little pellets that look like crap ) in the attic might contain some carcinogenic dust depending on were it was mined from .

That’s most likely vermiculite. Nasty asbestos laden stuff. I’ve got a couple inches of ancient wool or something. My dust mask turns black in a hour. I might wear my respirator up there tomorrow. I went up without a mask and was coughing for hours. . . .

That sound like the crap). I couldn’t think of the name. Mine is all covered by 2 layers of fiberglass, but definitely made a mess when I decided to install new lights in the ceiling of 2nd floor bathroom and bedrooms.

The power factor capability may be important for some users on the v2 model. Motors, fluorescent lights, and (I think) digital equipment are the major devices that have a power factor other than 1 (1 is optimal). From a cost standpoint, commercial customers are charged extra when the power factor is less than 1, so if cost is the main driver, residential customers may not care. Wikipedia has as good of an explanation of power factor that I’ve found. Disclaimer- I don’t really understand power factor, but when doing energy evaluation at my church, I learned which devices are bad news for our electric bill.

They charged my credit card but there is no indication that it has shipped. No signs of life at the company either…

I just spoke with Al, great guy, great service. My stuff should be arriving in a few days, big fun!

Received my 2 - anyone have device handler recommendations?

Would like a cumulative Kwh that is reset able as well as rather quick updates of current watts.

I am currently using this one by @johnconstantelo

The one below is one without the battery tile. I don’t recommend using this device on battery because it sleeps most of the time and doesn’t report very often to conserve battery. Occasionally, this HEM v1 will send out wildly fluctuating numbers (over hundred thousand watts) and this DH can be configured to ignore those. Below is what it looks like. 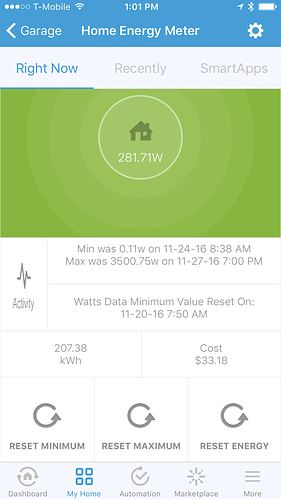 Thanks - that’s what I THOUGHT I was using - same author, but probably an older rev. Loaded that one and looks fine. (I have 4-5 in my IDE , all re-named.

Just received mine and already installed.
So far been working fine.
Just need to find a way to pull those cable nicely through the electrical panel… 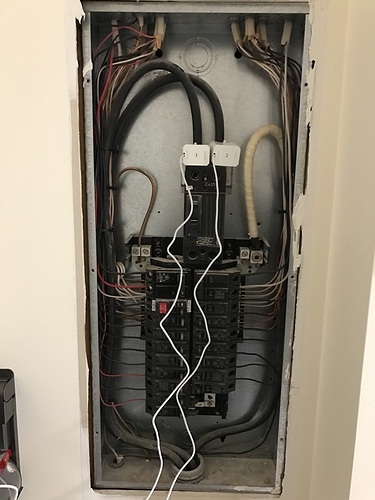 Punch out one of the knock outs and feed thru there. Add a 2-screw connector and shim way out with “something”. Could use fireproof foam or caulk as well.

Could use a smaller cord clamp but would need to drill the cabinet.

The electrical panel is recessed inside the wall, I could pull the cable through it but will still end up in the wall.
I have an electrical outlet 3 feet below, I may need to fish the cables out to the outlet… that’s not perfect but I can’t think of anything else…

Definitely need to spay foam in there, I can feel the cold going in! probably from the main cables… 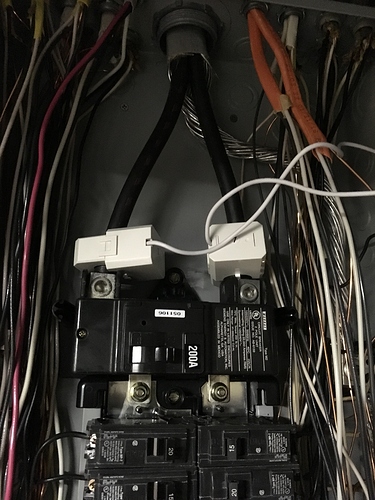 Lots and lots of room in my box, so installation was very easy. I just opened a knockout on the side and put a cable clamp in and that was that.

When I have pretty much every light and such turned off, TV off, not running the dryer and the water heater is not heating, it looks like my house uses about 300 watts. When the water heater kicks on, add 5,000! Clothing dryer, wow!

Right now my electric company will pay $750 towards the cost of a heat pump based water heater, and they only cost about $1,000 so I may do that.

Is there a way to export the readings to an external system so it can be logged? I realize a Smart App could do it but I’m wondering if there is already one, or if there is an easier way?

This is what I use.

That works nicely thank you!

I’ve been logging for a few days.

Hi all, Here’s a write-up of how I’m using InfluxDB and Grafana to visualise SmartThings device states in charts and dashboards. The solution uses a custom SmartApp I’ve written to send data from SmartThings to InfluxDB. Crucially it supports the database server being on the same private LAN as the SmartThings hub, so there’s no need to make your database server accessible from the internet. I’m quite pleased with it so far. In conjunction with my Evohome (Connect) SmartApp I’m getting some great graphs of my home heating behaviour and energy usage. Here’s an example of a temperature chart: [image] Here’s an Evohome Heating Zone chart with some overlays: [image] I aim to post another article covering some of the more-advanced Grafana features like templating and annotations in th…

Is it safe to open the breaker box? Is there a way to stop the power to it before that?

Is it safe to open the breaker box? Is there a way to stop the power to it before that?

Second question first. The only way to completely cut the power to your breaker box is to remove the electric meter that’s outside your home. You’re not supposed to do that and typically they have a seal, so the utility company will know if it’s cut.

First question, yes but only if you know what you’re doing. The front cover is usually held on by 4 or 6 screws and once they are removed the front cover lifts off. If you’re careful you can absolutely do this, assuming you have a somewhat ordinary circuit box. If you like, post pics of what you have. However, if you’re at all uncomfortable then get a friend who knows what he or she is doing to help.

Yes if you know what you can/can’t touch. If you aren’t sure, please don’t do it!

You can shut off the master breaker if there is one, then ONLY the biggest black/white cables coming into the panel will be live. Those of course are the ones you need to connect to, so due diligence is mandatory here…

Those heat pump based water heaters are nice I’ve had mine for 7 years I think it is now. It’s the 1st gen GE one, had 1 little issue with it but GE sent someone out to fix it. I like it so much when we moved 3 years ago I uninstalled it and brought it with us. Saves us tons of money.