I am looking to the Yale Assure Lock Touchscreen Deadbolt but they have z-wave and zigbee versions.
Any idea which is the way to go? It will be within 10ft of the ST hub so distance or repeaters won’t matter.
I have a mix of z-wave and zigbee in my house.
Wondering if the battery life is better, better security, etc is better than one than the other. Zigbee is $8 more but not a factor really. Any ideas on why it would be more? 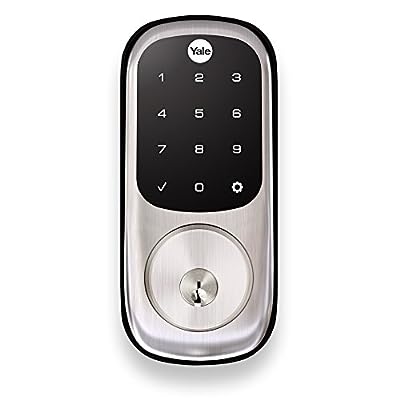 Secure your home with this Yale Real Living electronic lock and enjoy the convenience of unlocking and locking your door using the backlit touchscreen keypad; you'll never have to carry around your ke ...

Secure your home with this Yale Real Living electronic lock and enjoy the convenience of unlocking and locking your door using the backlit touchscreen keypad; you'll never have to carry around your ke ...

I personally prefer ZigBee but most community members prefer Z-Wave. ZigBee battery life is better than Z-Wave (Z-Wave plus is a different comparison). Also ZigBee natively supports firmware OTA updates however SmartThings currently does not support updating lock firmware. ZigBee also supports attribute bind reporting which I feel is a better way of reporting current lock status. Lutron has a patent on instant status that many Z-Wave implementations do not include due to paying royalty fees. Operating range between ZigBee and Z-Wave are comparable.

In any case both locks support the same feature set. If you want to remotely program codes it can be done with community SmartApps and DTHs for either lock type.

I believe the Z-Wave lock is Z-Wave Plus.
Would that be a game changer?

Leaning towards the zigbee right now…

You are correct. This is Yale’s new Assure line. They are Z-Wave Plus. Z-Wave Plus has comparable battery life to ZigBee and much better range than ZigBee. They also now support a standard firmware OTA process though SmartThings does not support Z-Wave firmware updates and have not confirmed if they ever will.