I’m seeing the same issue as Marcus is. It pairs, but always indicates “open”. I have forgot the device several times and rebooted the ST hub to no avail. Any suggestions? In the meantime I’m going to try it with the other door sensors I have.

I set up a second and disconnected and connected the first. Now the first one works and the second always says “open”. I will have to keep resetting the second until it works I guess … so weird.

I know this is a little old but hoping someone would reply. How do you pair it the brand is not in the supported list.

After it has been paird with ST, you login to the dev portal and assign it to the Tyco device driver.

After working perfectly for 5 months, all 3 of my Comcast door sensors stopped working one after the other within a few weeks of each other. I first thought that it was a battery, but I tested the battery and even put a new one in. Still ST keeps returning a device not available (no connection or activity). I tried to remove the device and set it up again, but ST doesn’t even see it anymore. So, the only thing I can think of is that the devices failed (they were probably cheap crap to begin with). Honestly unless it’s not worth salvaging. Go with the

On amazon they are 19 (I got mine on a deal from amazon when they were 12 each). You don’t save enough to warrant the aggravation of trying to reuse Comcast’s junk.

I use these as well. They work nicely.

were you able to get the comcast camera to work with smartthings?

I want to let everyone know that these sensors do NOT work with the latest SmartThings (version 3), the latest Android app and any of the Xfinity sensors issued 2017 and on. I tried three different sensors and the motion sensor and SmartThings won’t detect them at all (yes, I did the battery removal thing).

If anyone can prove me wrong, I’d love to hear how you got it to work. I spent over an hour trying to get these to work

I recently turned in my Xfinity home hub and I’ve not been able to get the comcast open/close sensors to even be recognized as “things” when trying to connect them to my Smartthings hub. So I second your findings.

Looks like first post in over a year! I just moved into a new house, which had some Xfinity home sensors left by the previous owners. After resetting the door sensor, I was able to automatically add it in the new SmartThings app. Then I successfully configured in IDE (first time trying, pretty easy), and it works flawlessly (for now)!! Screenshot_20200422-203920_SmartThings|236x500

My Xfinity contract ended 5 days ago. Just got a ST hub today and now have 10 Xfinity leftover sensors fully functioning in 30 minutes setup. Add it as Z-Wave->Generic Z-Wave Device in the ST app, then from web API change the default Type from 2015 Samsung TV to Tyco Door/Window Sensor. Thanks aonavy for posting the instructions! I’ve been waiting two years of Xfinity contract time to test this out. 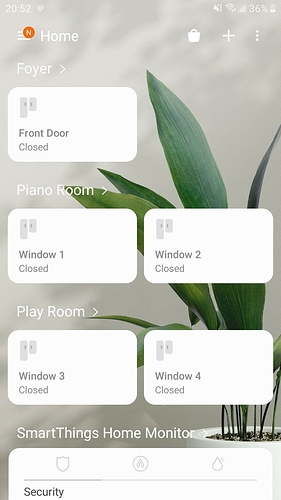 I just went off xfinity and was able to follow these directions to add my door and window sensors to smartthings. The key, which took me a while to figure out, is to properly factory reset each of the sensors. I’ve pasted the directions from the manual below. The sensors will blink green three times repeatedly once factory reset (at least mine did) and until paired with ST. I also found the magnet needed to be CLOSED in order to reset.

Reset to Factory Defaults & Reboot
If sensor needs to be factory defaulted (for example, to prepare it for joining with a home controller or security system).

Confirming that I just added XHS2-SE with V3 Hub and new app. It originally added as a Thing. In the IDE, changed Type = Tyco Window/Door Sensor. All is good. Shows open/closed, battery, and temperature.

Read all of @JENP post before starting. The first time, I help the tamper switch too long because I was still reading about releasing it during the 4 seconds that the LED is illuminated.

so, after taking the circuit board out of the plastic housing to gain access to the tamper switch on the underside and resetting with the battery/led, i got one of these to pair, but it originally joined under a quirky water sensor dh i have installed.

so, i went into the ide and changed the device type to the tyco window/door sensor and then it worked.

Not sure that I understand. First, the reset switch is accessible once the battery cover is removed. It can be seen here:

Learn how to install a battery in the Sercomm XHS2-SE Door/Window Sensor.

I just went through the process again recently, uh, moving them to a different hub. Interestingly, they connected as moisture sensors on Hubitat. I did not experience this when I added them to SmartThings a few months ago. Weird.

Not sure that I understand. First, the reset switch is accessible once the battery cover is removed. It can be seen here:

Learn how to install a battery in the Sercomm XHS2-SE Door/Window Sensor.

I just went through the process again recently, uh, moving them to a different hub. Interestingly, they connected as moisture sensors on Hubitat. I did not experience this when I added them to SmartThings a few months ago. Weird.

so, upon taking the sensor apart again I see that upon originally getting the sensor the inside cover was stuck inside the top cover, thus i was actually seeing the flat bottom of the circuit board. just now when i popped the top cover off it looks like the pictures in the link you attached, where the tamper is on top.

im pretty sure that quirky dh is the cause why this sensor originally paired as a quirky water sensor as the dh is roughly written.

on a side note i did notice that visonic 340 SMA (not the 340 E [already pairs]) are pairing and working.

Taking these apart can be awkward the first few times. Today, I noticed that I accidentally reset one of my sensors as I slid the cover back on. Guess that I pressed down in the wrong spot and hit that darn switch.

Good to know about the Visonic … does it have any particular advantages?

I got the device to a state where it blinks the green light thrice, waits and does the 3 blinks in a loop…

However when I try to add this sensor in smartthings using “Generic Z wave device” - Nothing shows up. It stays in the preparing step for a long time. Did any of you get this? If so, how did you go past this stage?

Any help much appreciated.

Since they were new I just pulled the plastic tab from the battery, waited a few seconds for the LED to blink 3X, then did Add Device | Scan Nearby in the App. After a few secs it finds a new “Thing”. Then, per the OP, I went to the API and changed the Device Type to Tyco Door/Window Sensor. As soon as I clicked Update, the device in the App changed to “Checking” so I used the magnet to close/open it and voila, all working!

Thanks to the OP and everyone for their contributions!!

I was confused by the “Generic Z-Wave Device” advice since these sensors are Zigbee??? Anyway, I just did Add Device | Scan Nearby while they were blinking 3X and they were found… Good Luck!