Take a look at this. I’m not using it but others are, and it seems to work for them:

Thanks @bravenel. The SmartApp is currently going through the approval process at SmartThings but you can get the latest code on github.

@hutchins79, you can use the app to turn on and off the fan (or any outlet or switch) based on a temperature setpoint (any sensor reporting temperature). You can make that setpoint dependent on what mode you’re in (home, away, etc.). I haven’t tested with only having cooling devices without any heating devices. Let me know if you run into any problems. At the minimum you can put in heating settings but not use the heating mode.

Hi Brian (@Dianoga),
Were you ever able to add code to check for open windows? I was about to start poking around to add that to your code, but it doesn’t make sense if you already did it.

I think I’m also going to make the app lock to specific mode(s), that way I can have different settings for night vs day vs away.

I have an need where the Whole House Fan by Brian without the thermostat meets almost all I need. I have an attic fan (not a whole house fan) and am using the code with a temp sensor outside and one in the attic. I trigger the attic fan when the attic is above a minimum temperature and the outside temperature is less than the attic temperature.

I would like to add one more bit of functionality. I would like it to trigger the fan only when 1) the attic temp is above my setpoint (app does this already) and 2) when the delta between the outside temp and attic temp is greater than a value I set.

I am missing number two. I have cases where the outside temp is 102F and the attic is 103 and it will turn on. Not much will happen here. I would like to set the minimum temperature to say 95 but only turn on if the difference between the inside and outside is say 10 degrees so the fan can actually make a difference by pulling in substantially cooler air.

Is this something someone can help me code and modify Brian’s code?

Thanks all! I am new to this and love it!

This is awesome! I would love to see it tied to an open window and the GE multi-speed switch. I’m toying with the idea of a QuietCool whole house fan and trying to figure out some automatic venting.

At first I was going to try and have my Ecobee3 control it but I think overall having SmartThings control it is best. But as I type that it might be cool if Ecobee would show the house fan usage as part of it’s reports…

Hey Brian,
I am looking for something like this to monitor 2 different temp sensors and trigger a fan to vent out hot air from my garage (to save money on AC/electricity bill; same basic idea as a whole-house fan, but in garage; will eventually be doing something similar for the attic as well, but starting here first).

Is there any chance you would be willing to create a modified version (or show me how; or point me in the direction for where to go to learn how) of this SmartApp that doesn’t require the house thermostat (I had it all set up and just about to work, but then it wouldn’t work, because I don’t have a smart thermostat, and don’t need it in this particular project anyway)?

In my case, since this will be in my garage, the house thermostat won’t be involved. So, I just want the other parts. i.e…

I already have all of the smart and dumb equipment that I need for the project (including a dumb fan, smart temp sensors, and a smart power switch). All have been connected to and are functioning properly with my version 1 SmartThings Hub.

Also, I already have a thread for my project (Dual Temp Monitoring Garage Cooling Fan System). So, I am already in the process of refining what’s all going to be involved. Now I just need to get the SmartApp part figured out, and your app looks like the closest thing to what I need among apps that are already out there, ready to go.

If I can get some help with this SmartApp aspect, I could begin saving a little money (less heat in the garage means less heat in the bedrooms above it and the rest of the house it is connected to, which means less electricity needed for AC to keep the house cool) in the very near future.

UPDATE: Actually, I think I got it figured out.
I just copied the code for your SmartApp, identified the portions that I thought weren’t needed (including those relating to both the thermostat and the windows/doors), removed them, resaved, and republished (for just me, of course). Now it is working!

One more thing though…
Is it possible to configure it to trigger on a relational difference instead of just a pure difference?
e.g. instead of triggering on whether or not one temp is higher/lower than another, can it be more sophisticated and trigger on the temp of one being ‘at least’ 5 degrees different?

I don’t know if it actually matters much, but I’m thinking it may help minimize the time spent running the fan when the benefit would be negligable…or is it definitely better to just have it based directly on the higher-than/lower-than idea?

I recently wrote just such an app for the very same reason. Funny thing is that I discovered that the exhaust fans I have are actually worthless, and don’t reduce the temperature at all. Boohoo.

The app, Garage Vent Fans is on Github: 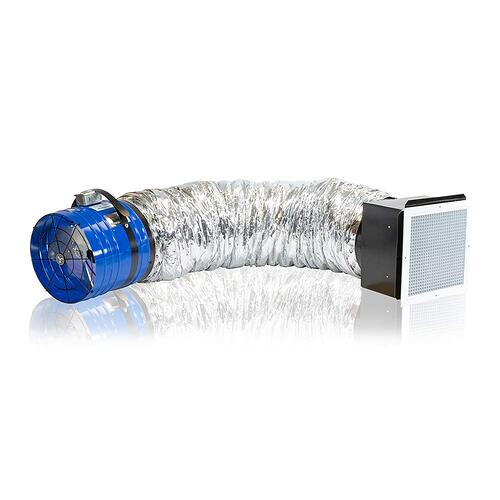