Trying to reproduce an automation

I had an automation I built for my home back in 2015 that basically said that if my wife and I were both gone (using our phones as a presence sensor) and one of us arrived home to unlock the front door. It also said that if it was after sunset to also turn on a series of lights inside and outside the house for 10 minutes.

This automation worked great for me for almost 5 years but now that I’ve upgraded my app it is gone and I can’t seem to reproduce it.

If anyone has a good idea of how to do this with the latest tools, I would really appreciate some guidance.

Here’s a sample webcore piston you could import. If you want to know more about webcore click the link below.

However, I generally avoid any automation that automatically unlocks a door or opens a garage door. I automate locking doors, but if something goes wrong I don’t want someone to get into the house. 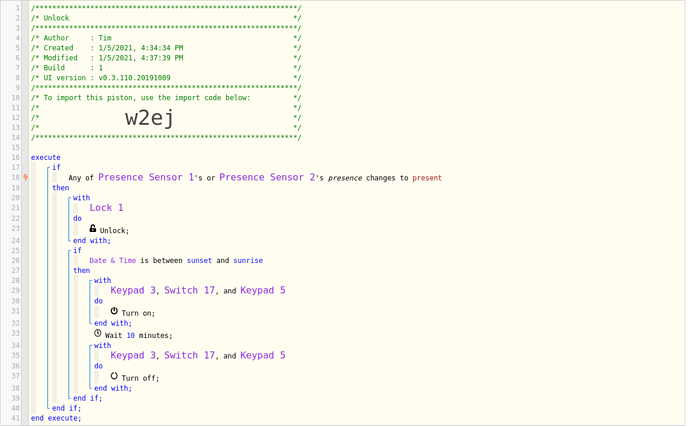 Thinking out loud. Could you create two automations? Add an arrival condition and a second condition between sunset and sunrise. Have it unlock the door and run a scene that turns on your required lights. On the second automation, give it the opposite condition, sunrise to sunset and don’t run the scene, only unlock the door.

I do the same thing but don’t have the sunrise sunset condition. Mine just always turns on specific lights even in the daytime I may have to try this myself 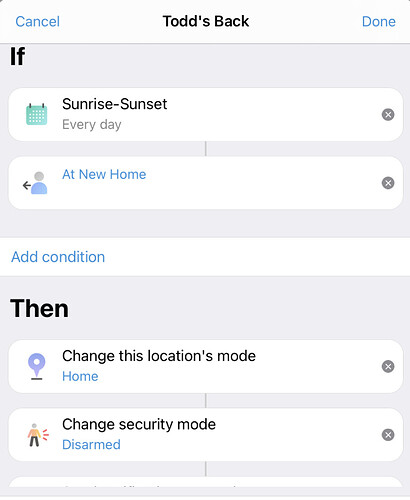 Could you create two automations? Add an arrival condition and a second condition between sunset and sunrise.

I was originally going to suggest a couple automations, however the OP also wants those lights that turn on when they get home to turn off after 10 minutes. I’m not quite sure how to automate that using the native automations. I’m sure it’s possible, but now you’re probably looking at 3 separate automations.

I do have concerns for the future of webcore with the coming IDE phase out and the end of Groovy smartapps. I’m hopeful a new rules engine will replace it, since native automations just don’t meet more complex automations I need. So, if anyone does get into webcore now, they should know there’s no guarantee for its future and things may need to be redone at some point.