Trouble with switch responding to commands from hub

Having trouble with a GE/Jaso On/Off switch. This switch controls my pool light, it’s outdoor in a metal outlet box with a plastic wet-area cover on it (position 1 in the drawing). There’s two switches inside the house about 10 ft away (position 2), and three switches in plastic outdoor boxes as well as 1 outdoor GE module inside a metal box at position 3, probably 30-ish feet away from position 1.

The problem switch works fine when turning on/off manually, but doesn’t respond to the majority of the commands from the hub.

There have been a few recent changes, everything was working fine before the following:

After making the changes above, the switch stopped responding to most commands. Occasionally it works immediately, and sometimes will respond after several seconds, but usually not at all. This makes me think it’s a routing problem, caused by my recent changes.

Question is…how do I fix this? I’ve tried turning the switch on and off manually several times and refreshing the app status. I’ve tried turning on and off through the app several times. I have not done a z-wave repair yet, read that this can cause more problems than fixes. Though about excluding and re-adding the switch, wouldn’t be too tough but wanted to see if there were any other solutions first. 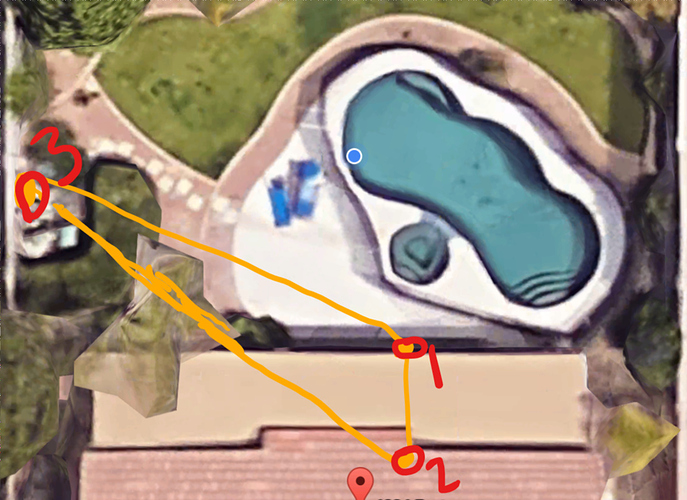 Metal blocks signal. If I understand you correctly, you’ve put a switch into a metal box and now it doesn’t receive signals. That would be normal.

If you need to shelter the switch from the weather, set up a plastic enclosure box next to the metal box and put the switch inside of it.

Probably the module that you moved into the other metal box had been acting as a repeater and managing to get signal into the switch inside the metal box. But basically anything with a radio you need to get out of the metal box and into a plastic enclosure instead.

The other thing you should do is run a Z wave repair, that will get all of the switches communicating with each other in the most efficient way, but that can’t solve the problem that signal is degraded when it’s inside a metal box.

There was a brief point over the summer when for some reason some SmartThings support people were telling customers that running a zwave repair would cause problems, but it really shouldn’t. It’s a standard Z wave utility. If you have any concerns, speak to support first. But it’s still a recommended procedure from the official knowledgebase:

Thanks JD. I ran the network repair and it started responding better.

The switch was already in a metal box with a metal switch cover and was working fine. I actually replaced the metal cover with a plastic one to help signal strength and it got worse, but I think that actually has more to do with the outdoor module at position 3 being moved inside a metal box than anything else. I moved the outdoor module into the metal box after installing 3 new switches for my pool equipment right next to it, figured those were close enough that the signal would still get through. In doing that, I think I screwed up the routing to the pool light switch at position 1. Will keep an eye on it for a few days and make additional changes if necessary, but I saw a huge improvement just last night after doing the repair. Thanks again.

The switch stopped responding again last night, so I took the outdoor module at position 3 back out of its metal box to see if that was the routing issue. No change. Next I replaced the plastic outdoor switch cover on the problem switch with the old metal cover it had before the problem started and it started working again. Still responding as of this morning too. Go figure.

Weird, but I’m glad you got it fixed. “All Home Automation is local.”

Note that whenever you move the physical location of the device, even moving the module from inside the metal box to outside the metal box, you need to do another Z wave repair so that everybody knows who their closest (strongest signal) neighbors are.

Since the module’s signal strength would jump way up after you took it out of the metal box, then you want to make sure that the other devices around it recognize that.

BTW, is the plastic cover you used clear? Some of the blue covers also seriously obstruct signal, I’m not sure why. Some common element.

Here’s the problem switch. The plastic cover I’m holding is the one I removed yesterday, and the painted cover that’s on it now is metal. 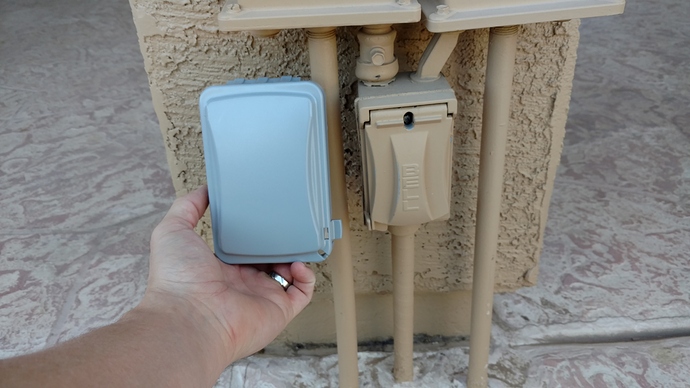 This is the stuff that’s at position 3 in my original post. The outdoor module I talked about is hanging below the silver metal box on the left. There’s 3 other GE switches in the clear plastic boxes. 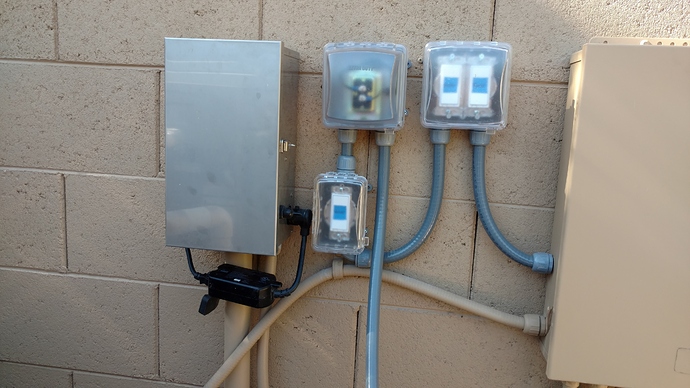 Sometimes it’s a little tiny detail, like maybe the blue plastic cover is airtight and the metal cover has more gaps to let signal escape.

As long as you have it working now, you don’t need to track down every factor. The clear plastic boxes should be fine even if they have tight seals.