I’m looking to get a thermostat to work my ST setup, i’m still using v1 hub and just have the v2 sitting in a box waiting until the bugs are worked out.

I don’t have a C-wire available, and i’ve been looking at different options. I don’t think I want the nest because of where my thermostat is located it won’t detect enough movement to be able to learn.

Anyone have any suggestions or ideas?

I use the CT100 from radio thermostats because its $80, doesnt require c-wire, touchscreen, and I like the auto mode. It’s not as pretty as nest though. It’s a great thermostat on its own, but it’s amazing at that price with zwave control. (not sure how you’d use an ‘app’ if internet is down, but good luck with your hunt, though I may not be able to help you find what you seek.)

Yeah, it’s awesome for a set&forget thermostat if you don’t want fancy scheduling and modes for the reasons I mentioned. AND it’s even more amazing because you can use zwave to schedule and/or mode.

Mine gets set to 65 heat, 78 cool, (which is comfortable for our house)
And that’s all it would do without zwave; just auto fan and auto climate.

With smartthings, if family isn’t home it sets to 60 heat 82 cool and back again when we return. If smartthings/internet goes offline we would lose remote control of it, but it is still pretty standard thermostat with standard touch controls if somebody is uncomfortable (remember, grandma doesn’t use apps).

If you’re looking for something with built in programmable scheduling, or motion sensors or a much more elegant design, you’ll pay more. And I don’t blame you if you do. But I love my zwave thermostat, because it’s simple and effective on its own, but with smartthings, I can make it do all that.

I have also been looking at the ct101 sold at lowes. It is same thing as ct100, but can be programmed from the Tstat itself.

On another note @jt323bd what kind of battery life are you getting with your ct100?

I use two of the Honeywell 8320 Zwave thermostats.

They are fully controllable via the ST app and they work fewest with ST.

Also, if ST is down there is full functionality at the physical thermostat.

You can program it via ST and if that fails, the internal programming schedule takes over.

I really like mine. Very easy to set up and haven’t any problems since

They also cane with the no c wire adapter in the box.

I got mine on Amazon here: 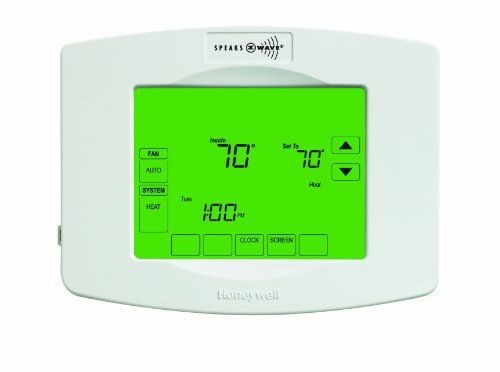 Honeywell Z-Wave Enabled Programmable Thermostat can be integrated with other home automation devices. Universal scheduling - Can be configured to meet virtually ANY scheduling requirement: Selectable ...

Edit:
I actuality don’t use a smart app with these, I only use the device handler for manual changes and then it’s in my rules.

Yeah, that CT101 (from lowes) for $20 more to get a built in 7day programming (not that i’d use it) but just if i someday move, that 7day feature is something dumb houses usually have.