Exact same happened to me. Buttons are no longer working.

I’ve been using the SmartThings Edge Beta Zwave Button driver for a while and my AEON (Areotec) Minimotes are working fine.

My ST buttons are all still working fine and all three appear to still be on the stock DTH.

last night one of my 20-25 buttons stopped working. this morning i removed/re-added it then it started working again. 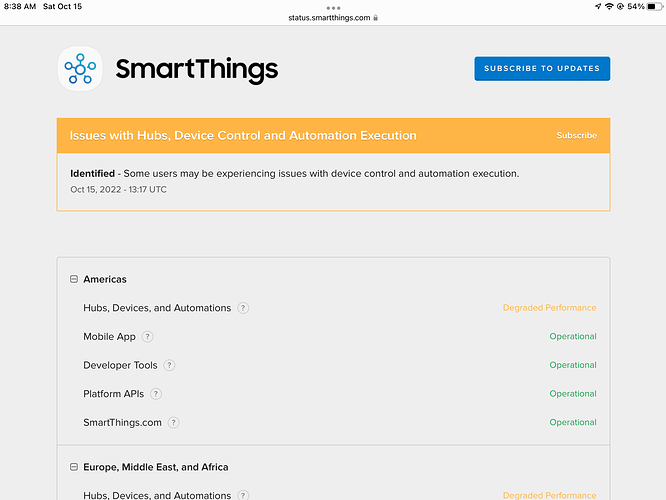 I tried to access my hub to check driver status on IOS app the familiar network connection issue but this time continuously. I dug out my trusty android backup, I can open the app but can’t control anything! Checked Smartthings Status: Hubs, Devices, and Automations Degraded Performance across all regions.

For me, my schlage lock doesn’t seem to report event anymore

Is there a way to see if we are migrated yet or not ?

So far they have said they are working on edge Drivers for the series 200 and above devices, but not the older devices which are no longer sold.

10 posts were merged into an existing topic: Leaving SmartThings

Here I also have no big Problems unti now. All my plugs, switches , curtains automations, lights and sensors are working perfect. Everything with Edge. I think I will only loose my Eutronic Air Quality Sensor. Here no Edge Driver exist , and zur normal Z-Wave driver do not work. Maybe in future.

Does anyone who waited to see what would happen have any new placeholders or things yet? No changes on my end yet.

No changes on my end yet

Same. New firmware coming starting tomorrow so I’d not expect anything before that completes rollout.

My Arlo cameras have now stopped sending motion detection to Smarthings AND Sharptools.
They were showing as placeholder in the IDE but now show Arlo Pro Camera.
This is fairly serious as without motion detection , no routines can be used that get triggered by camera motion !
They DO still report motion to the arlo app itself…
Anyone else seeing this?
EDIT…I just deleted the arlo/smarthings link and set it up again…
Now all arlo cameras show as PLACEHOLDER again but now there are 2 of each one , and one of them now detects motion in smarthings !
I have now had to also remove the sharptools link…remake it, and then re-add each device to the rules I had already created …BUT its working…(for now)
Hope that helps somebody with the same issues…

He was one of the primary people working on Rules API. He laid the groundwork, the webcore dev community has chosen to not use it and has moved on to other platforms.

Samsung has done a very bad job with explaining how to use the new environment. I thought I was going to need to use Lua to code the new pieces but then found out it was for drivers.

The Rules API does not allow me to go to the web to interact with other sites. It has a goofy verbose coding syntax. If they hid that syntax behind WebCore they would be in a better position I think.

Whether Samsung promised something or not at this point is not important. They dropped the ball and their platform will be seen as very limited. Maybe the numbers are small so they don’t care.

I want my home automation in one environment. If I am going to do some of my automations in HASSIO Node-Red I might as well do them all. For simple stuff the routines are fine.

This is what I was hoping for.

Having used both Hubitat and Home Assistant, both of those systems have front ends that let you build complicated rules while hiding the super technical stuff.

I’ve worked as an Enterprise developer for 30+ years.
I “could” dive into the Rules API and come up more complex rules that the Routine editor currently doesn’t provide, but I honestly don’t feel like I should need to do that for what I’m trying to accomplish.

But they did announce the Routine Creator, which although only a Beta was communicated as a solid plan last year

yes! This is the most disappointing part of this transition. It seems they had a working beta of a complex rules builder using the rules API and then…nothing. This would have been a GREAT tool for those moving off of webcore that found the Routine builder in the mobile app too limiting. Unfortunately both of the people in that video that discussed it are no longer with SmartThings