These look like Wifi devices, has anyone had a chance to see if they integrate with ST?

The outlet has 2 USB in addition to the controllable outlet which makes it interested to me. 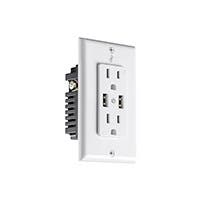