[ST Edge] How to create child devices with edge?

Groovy DTHs originally only had the concept of Parent-Child devices. Components were a concept introduced with the next-gen platform (eg. next-gen C2C integrations circa 2017-2018). Following that, Groovy devices which were creating child devices could be enriched to add the isComponent: true flag when creating a child and it was also created as a component so it would display in the SmartThings (Samsung Connect) mobile app with a nice UI.

Of course, Edge Drivers follow all that much later and I guess it makes sense to assume Edge components would get translated backwards for use in Groovy, but I can also see how we’re coming to an end with Groovy and perhaps that translation layer needed to be updated for Edge devices and wasn’t.

Either way, MCD devices seem to work fine in the testing I’ve done with our next-gen integration in my local development instance. I ordered a few more devices which I believe have MCD Edge Drivers available and will test with those as well.

Thanks for sharing, Paul. That particular link is to a beta thread, so most people won’t be able to see it, but I’m copying the content here (as it’s available for new SharpTools users using the next-gen connection):

For example, if you have a dual outlet device or multi-button device, these may be implemented as multi component devices. To get your multi-component devices to show up, proceed through the authorization process starting from your SharpTools.io User Page.

Multi Component Devices are synced over to SharpTools as independent ‘Things’ with the component name in parentheses. Some devices may have a ‘main’ component that does things like monitor sensor values and act as a control for all components: 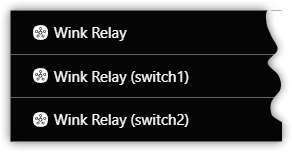 Whereas others might have the first element as the ‘main’ component and secondary elements as components: