Smartthings app Wishlist - most of these things are basic

I don’t know if this is the proper category in which to put this. Please move as required/desired.

I’ve been with Smartthings for quite some time and it still frustrates and boggles me that the app is as crude as it is. It really has a “my first smart ap” feel to it. And I don’t think it actually makes it simple.

My wishlist of functions that could be corrected/implemented. Mostly (perhaps not the widgets; I don’t know what limitations IOS places) this is really basic stuff. On a programming level, it seems as though it could be knocked out in a couple days: it’s mostly basic UI critique.

There are more - but these are some of the basics that have caused frustration for me since Day one.

Would be amazing if this actually went somewhere.

On a programming level, it seems as though it could be knocked out in a couple days:

Couple of days for all that!

Maybe more than a couple days (snarky comment about how slow Samsung’s everything is) - but a lot of these requests are UI STYLE based. It’s really not that hard to update links and UI.

You can easily select the sensors you want to use STHM.

Create a Scene for each mode. It is easy to change and can be used in widgets. 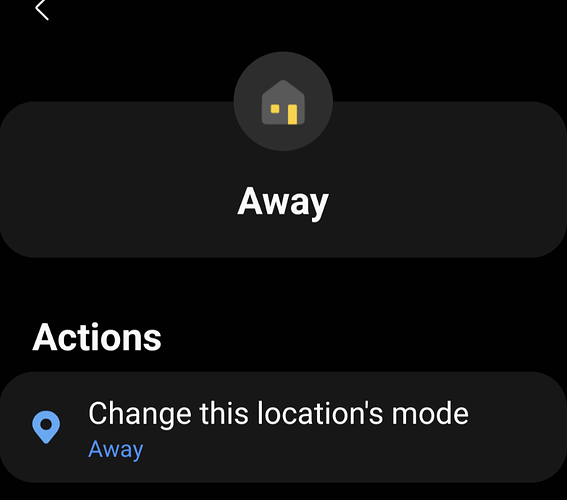 If I have to create a scene, there’s no point to the mode function - I can add all mode functionality within the scene. We really shouldn’t have to jump through these hoops for a ‘feature’.

FAQ: How to Add a New Location Mode, or Manually Change from One Location Mode to Another (Classic App) Apps & Clients

If you have a hub it is easy to make a tile to display your Location Mode. And if you make it a favorite it will show up on the favorites page Use @Mariano_Colmenarejo Aplicaciones Virtuales (formerly Mc Virtual Appliance) and selected “textfield 5 field” to create a virtual device. Leave all fields in the new device blank. Then write 3 Automations to set field 1 to Away, Home or Night based on location mode. [Screenshot_20230114-153525]

You do have this choice, it’s just a pain to find it. So UI improvement is needed, but the functionality exists.

How can I set only one door sensor to activate at a set time? - #9 by JDRoberts

Your solution is an exact case and point of my complaint. It’s nuts that we have been “stockholm syndromed” into thinking this is a sane way of doing things.

Well if you wait for SmartThings to change it you will be old and gray like me.

Would be amazing if this actually went somewhere.

This forum was set up several years ago so that customers could help other customers. You’ll get a lot of moral support for a list like this, but it’s not likely to ever be read by a Samsung employee.

To make official feature requests, it’s best to do it on the Facebook page or the Twitter account or somewhere else which is officially monitored. At least marketing reads those.

how do I get to this screen? I’m not seeing it in IOS… and the only thing I see is a slider to enable or disable ALL sensors… I don’t get the sub menu you show…

Will do. Hope springs eternal.

how do I get to this screen? I’m not seeing it in IOS… and the only thing I see is a slider to enable or disable ALL sensors… I don’t get the sub menu you show…

See my post above. There are multiple steps to get there, and the weirdest thing is that at one point you have to tap on the name rather than the toggle. It’s a really strange design.

The following screenshot shows an accessibility issue which has been present for at least two years and has been formally reported multiple times. 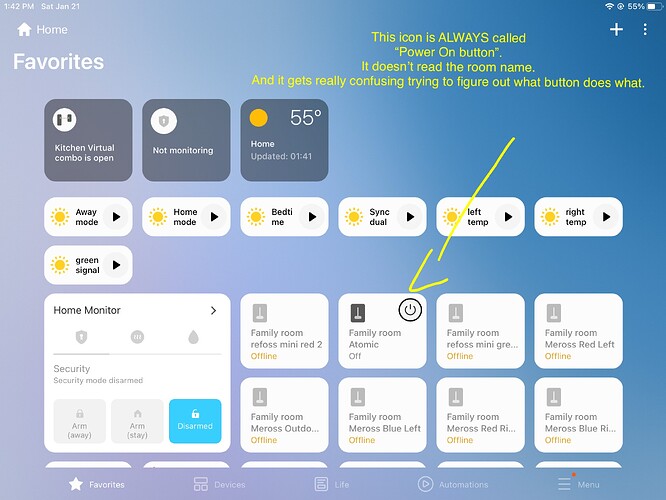 I didn’t realise any were all or nothing. For the Security Sensors you can certainly pick and choose. The UI used to be a bit silly as you had to click on the ‘none selected’ text which didn’t look like a link, but now I see that in the Android app it is actually harder to move the slider to select all the sensors without bringing up the device selection screen.

didn’t realise any were all or nothing.

I just checked, and the steps I gave in the post I previously linked to still work. That post also has screenshots so you can see exactly what you have to select each time. Because it’s definitely not intuitive.

How can I set only one door sensor to activate at a set time? - #9 by JDRoberts