I am developing a project I’m calling the Smart Room Controller. It’s essentially become an Arudino clone with built-in features that make interacting with and controlling elements of a room much easier.

The central benefit is its ability to control 12V RGB LED Light Strips. They are cheap and can be hidden almost anywhere. I have them mounted under my kitchen cabinets, under my TV stand, and behind my computer monitors. With modified and standard SmartApps, the system can use the lights in the following ways:

It makes use of the following standard capabilities for compatibility with existing SmartApps:

As I mentioned, it is controllable from a IR remote control as well, for those times when pulling a phone app out would feel like more work than pressing a simple button.

Although not everything is up to date, here is a video of my project in action.

Here are a few pictures. 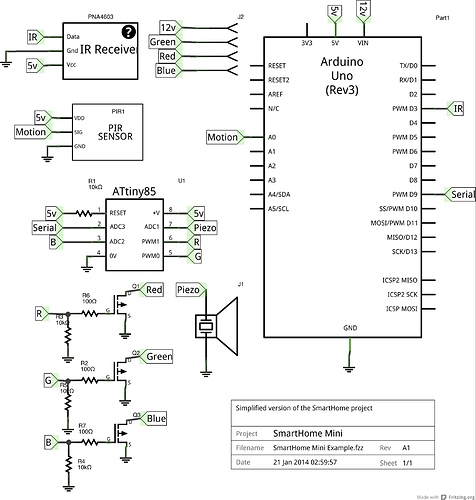 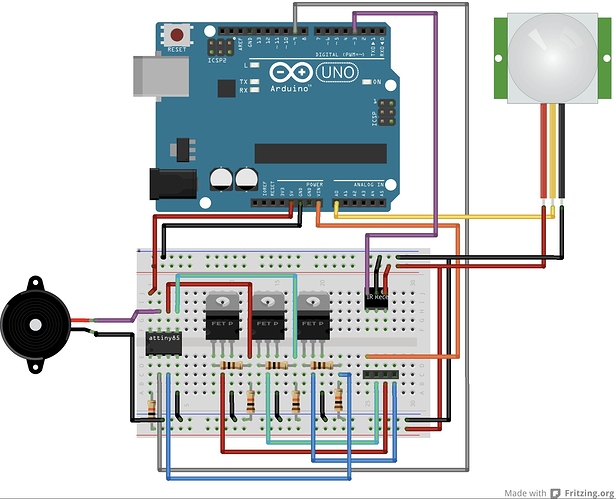 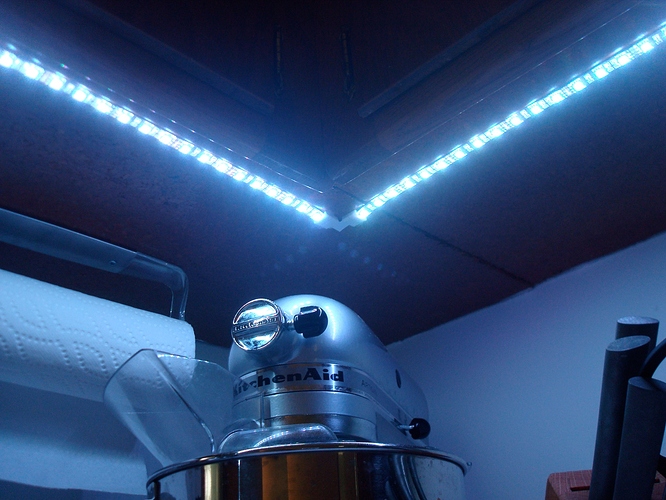 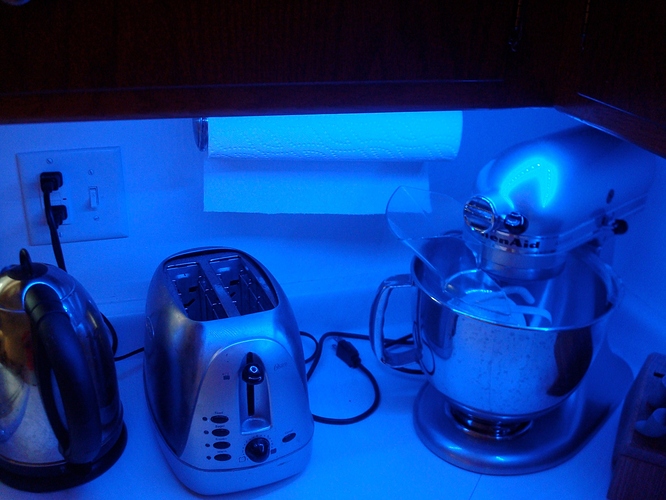 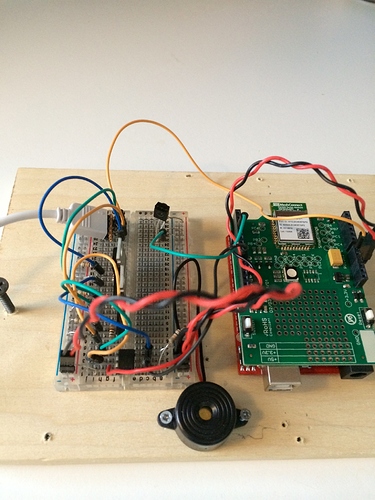 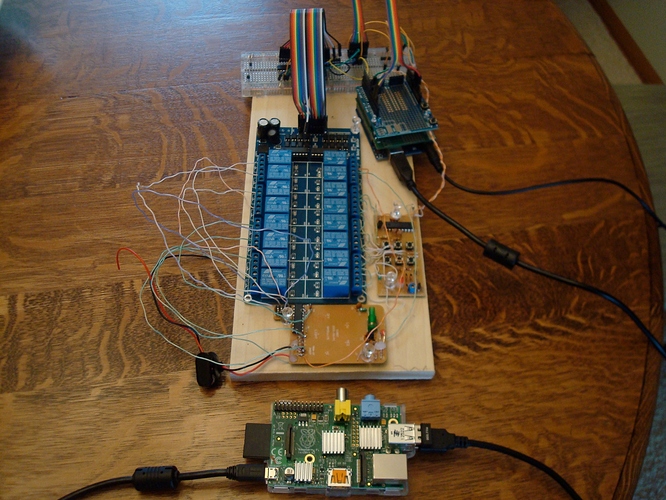 Very neat project! How do you have the light strip on the other side of the window wired in?

Sorry if I’m missing something, but I don’t have it running through a window. I have the “guts” mounted to the ceiling of my cabinets above my microwave (to borrow power), and then have a 4 wire (12V+ common, Red -, Green -, Blue -) cable that runs from the controller board through the cabinets to the light strips themselves.

The software can deliver different PWM values to each light channel independently, allowing for custom colors or even tweaking the white to make it soft or bright.

Is that what you were asking about? If so I can post pictures; otherwise let me know so I can clarify.

I love this! It would be cool to see it in a SparkCore too so the form factor can be cut down. Did you use LED drivers controlled via the arudino PWM?

@docwisdom I just ordered a spark core and some neopixels rings and matrix to attempt a similar concept.

@dome If you wanted to add additional notifications from IFTTT or using Tasker on Android would that be possible using your current programming? My end dream would be to have a neopixel ring in my bedroom, man cave, and at my desk at work, and be able to discern a variety of info based on the color, number of pixels illuminated, brightness, etc.

have fun with the spark!

Im doing something similar over at

This one kept me up until 4am writing notes and pouring ideas on to paper. I welcome improvements! I will of course be sharing my code/diagrams. I present, the Bedside Command Center! (2001 music playing) [image] The Concept A bedside alarm clock that is connected to the SmartThings zigbee network utilizing an Arduino Uno and the ST shield. It would not only be an input terminal for controlling other ST devices but be controlled by triggers from within the home. Proposed Components Broken Philips HL3470 Wake Up Light - $17 Arduino Uno - $25 ThingShield - $35 NeoPixel Ring - $10 PIR Motion Sensor - $10 Electret Microphone - $7 Analog Light Sensor - $4 DC/DC Step-Down Converter - $10 N-channel power MOSFET (3) - $6 RGB 5050 Strip Kit - $22 Temperature Sensor - $4 Total:…

Mind sharing some of your code?

No code yet. Still gathering and planning. I ordered it all yesterday so should be arriving this week hopefully. I’m pretty new to this all so I’ll be learning a good portion alongside the dreaming and designing. Hopefully it’s somewhat smooth.

how about the code for your smart room controller above?

Sorry for my lack of responsiveness. My son was born prematurely earlier this summer and just passed away from complications. I had been completely wrapped up with spending time with him and funeral planning, etc., and haven’t touched this project since May.

I will get the device type, Arduino code, Fritzing file, and smartapps I have written tied up into a zip file and throw it on my dropbox. I’ll do github updates at some point.

Thank you for your interest in my project, I really do appreciate it.

@dome my sincerest condolences! I can’t imagine what you must be going through right now. I hope you and your family find peace as time passes.

Please take all the time you need and your contributions are greatly appreciated.

Thank you. It has been terrible but also wonderful because I got to spend a lot of really great time with my son. I will never understand why this happened, but I know my son has impacted a lot of people. If you’re interested in reading more of his story, I made this site to chronicle his progress and tell his story.

I put all my files into a ZIP file. There are two arduino sketches - one runs on the small ATTiny chip and the other one runs on an Uno R3 or something else based on the Atmega 328P (try something else at your own risk, I had no luck with a Leonardo). Eventually the Atmega328 will be brought into the custom PCB I’m making - look at SmartHome 06-1.fzz for an example (but don’t try to build it as is - there are still issues!). As far as building, I recommend basing it on the SmartHome Mini Example 2 file. This includes a 3 channel LED driver as well as a motion sensor, a piezo element, and an infrared receiver.

@Ben, can you post my old Smart Room Controller build instructions on here? If I remember I talked about component selection on there.

I’m really glad you guys like this. I’d love to see what your setup looks like when you get it going and would love input with tweaks you make to the code. Let me know if you have questions, I’ll try not to take 2 months to respond.

Glad to hear your spirits are up @dome. Your story tugged at my heart strings as I read through the journal entries. I hope the best for you and your wife in the future!

Thanks for the code zip. Im running through it now to see what you have put together. Im using an Uno R3 right now.

@Ben, can you post my old Smart Room Controller build instructions on here? If I remember I talked about component selection on there.

Sure - is this different from the SmartKitchen project? I can look for it.

@docwisdom Thanks. It’s been quite a summer!

@Ben It’s the same… I decided the name SmartKitchen was too narrow, and after I made a second copy for my desk I came up with Smart Room Controller. The idea is that it can interface a room with SmartThings in several different ways - both by supplying the cloud with information (like motion) and by sending notifications from the cloud back down to the room by changing lights and making a sound.

@dome. I can’t imagine. I hope peace is finding you as best as could be hoped when you’re going through a time like this.

@dome I am so sorry for your loss. I had two very good friends as well go through a similar event. I can never find the words to convey my feelings adequately. Just please know that I wish you and your family well, and that things do get better as life moves on.

When I went through some hard times, I found it best to jump into a project to keep my mind of things for a bit, I hope this project does that for you.

Thank you for sharing in so many ways. Have a great labor day weekend.

@buds444 @theedpope Thank you. Every day brings its challenges, but we are moving forward as much as possible. I miss my son terribly but am so grateful he has been made whole and is home with the Lord.

I also have been working a little on the smartapps that are modified to work with this project. I have been trying to make a smart weather alert app that can be customized to only activate for true weather emergencies (i.e., tornado warnings, severe thunderstorm warnings, and flash flood warnings). Unfortunately I haven’t had much luck yet, although I did include the code in the zip file above.

On my long-term wish list is exploring other ways to connect this project to the ST cloud besides the ST shield. I am exploring connecting it to a Raspberry Pi, although admittedly this wouldn’t be the cheapest option and I am open to suggestions.