Smart Lighting vs Button Controller vs Other

What’s the best way to control my minimote buttons? I initially tried button controller, but I remember it lagged (not local), so I switched to smart lighting, but now I’m having problems with the first button press not registering (and the second button press causes both the first and second presses to suddenly register).

Anyway, just wondering what others are using and their experiences.

I’ve used these solutions that were discussed in another thread. I settled on my own solution

. I’ll be honest and say that I’ve experienced no real lag in these solutions, and the DH I’m using for the Minimote. I like them so much I bought 3 more.

HI @Ron, I agree that just giving a link to a search without any context or additional info doesn’t help. I just added 3 of these and ordered 3 more, and I use a modified button controller app from @bravenel that I made into a parent/child SmartApp. As @JDRoberts said, Button Controller will work perfectly for these, but if you have several like I do, you can’t give each instance of the app a separate name for some reason; hence my need to create what I did. The Button Controller app is found in ST’s Marketplace Bruce’s app can be found here: https://raw.githubusercontent.com/bravenel/SmartThings/master/Button%20Controller%2B My parent/child app can be found here: (look for my-button-controller-child and my-button-controller-parent) https://github.com/constjs/jcdevhandlers/tree…

Unless I’m missing something, Bruce’s app will let you name each instance of button+. I have one in the living room and one in the bedroom each with separate app names. 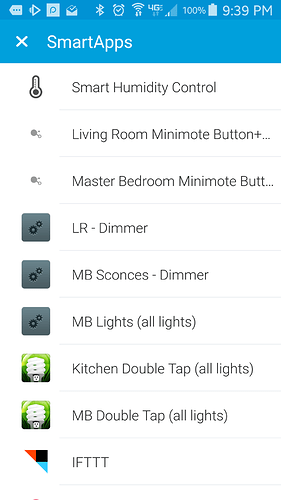 I’ve had good luck with regular ole SmartLighting and the normal device handler.

Correct, Bruce’'s will but ST’s doesn’t for some reason.

I didn’t realize that. I just assumed it did and Bruce only added additional button commands. I am really surprised that the ST app doesn’t. It appears that the code to make that feature is pretty simple from what I’ve found in other apps. I ended up using Bruce’s because I wanted the dimming features and that the program had been around long enough that ST won’t break it with an update and if they did, they would have to fix theirs and I would lose the dimming or probably be able to fix Bruce’s.

I’ve ben using ST Smartlighting app for the buttons and it works pretty decent. I have the same problem that if it has been sitting for a while I have to press the button twice to get the remote to wake up. After that, it controls everything quickly. I’m not sure why it does this since it is not really asleep. When I look at the recent events, the first button push is in there. I tell my wife it just needs to wake up so she doesn’t think it is an issue.

I’ll have to remember the wake-up response if I run into it with my better half. She would also be ok with that. Still faster than using an app. So far I love mine, especially in the bedroom even I’m half asleep.