Could someone possibly help me cut through all this chaff? It’s unbelievably difficult trying to configure and find the best solution to home automation!

I have a number of Phillips Hue bulb/Nest Hello, Thermo etc etc. And have Google Home pretty much running my house. Problem is that the In-laws and cleaner constantly turn the lights off by the switch!!! I’ve been looking into it and fortunately I am in a new build property so I have access to a neutral wire. Could someone please point me in the right direction for a good hard wired light switch which has a variety of gangs and ways? I’ve been searching now for days but it’s so difficult because most UK threads don’t have a neutral so go off in a tangent!.

So your real issue is that the lights are being turned off at the switch and you want to prevent that. It sounds as if you are asking about smart switches that you might replace the mechanical switch in an attempt to solve your issue.

You would not typically use a smart switch with a smart bulb (you’re using Hues). One or the other should be automated, but not both.

The solution in the US would to be to put some sort of cover over the switch to prevent its use. I know that your switches are a bit different over the pond, so I’m not sure if there are such covers for those types of switches. Maybe you could post a picture so we can see what you are using.

If you do ultimately decide to swap out your switch(es) for something smart, then you should change to non-smart bulbs, which you probably won’t want to do.

Another solution, at least in the US and for a single pole switch, would be to pull the two conductors from the switch and wire nut them together, effectively taking the switch out of the equation. Not sure if that is legal over in the UK or not, however.

As @Bry said, You should not use a switch which controls the current to a smart bulb, whether that switch is dumb or not. The bulbs are designed to always be on power and to decide for themselves how bright to be. Cutting power once in a while during a power outage is not a huge problem. But cutting it every day like it was a regular switch can significantly shorten the life of the bulbs, making expensive bulbs that much more expensive.

Smart bulb, smart switch: but NOT on the same circuit branch

The simplest alternative is to add battery operated switches whereever you want them And put child safety locks on the original switches. That gives you a switch that guests can use while leaving the original switch available for emergencies.

Phillips has signed up new partners, including two or three in Europe, who will be coming out with switches which look just like regular UK/Europe switches but use a technology which does not require any battery at all. This will be a good choice for many people. You can still do whatever you want to do with your home automation rules, such as making the lights come on from a motion sensor or at a specific time of day. But the physical switch is available as a parallel means of control.

If you like, you can also put a blanking plate over the original switch and then put the smart switch over the top of that. Just a question of personal aesthetics.

You can do the same thing now with the Phillips dimming switch, which works fine for this purpose, but it doesn’t look like a regular UK switch. 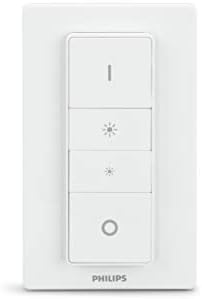 Do you really need a smart bulb?

Many people who have smartthings use smart switches with dumb bulbs for any place where they don’t actually need smart bulbs. That’s when that neutral wire will make a big difference.

Smart bulbs are usually used when:

A) you want the Colour-changing features

B) you don’t want to do any re-wiring

However, if none of those three apply, a smart switch with dumb bulbs is generally less expensive and more effective.

Smart Switches to Use with Dumb Bulbs

So it’s up to you. If you are looking for a good smart switch to use with dumb bulbs there are two main options.

You can either get an in wall micro such as the Fibaro and then you can use pretty much any dumb switch that you like with it, although a refractive/momentary switch will end up being the most intuitive.

@anon36505037 has now done two complete houses with Fibaro kit, so you might find some of his project reports of interest:

Or you can get one of the models like Popp or TKBHome which are an all in one switch replacement, where you will have a choice of face plates.

Sop our range of wall dimmers and switches that can be used to wirelessly control any of your home automation networks lights and appliances, and to track their power consumption. Rated excellent on Trustpilot.

Have you had a chance to look at the UK lighting FAQ yet? I know it can feel overwhelming, but pretty much all of the options are detailed there:

If you want to keep the Hue bulbs, jumper the wall switch.

Open the switch (remove it from the wall) and put the 2 separate wires under one terminal screw.

By that you short-cut / jumper the switch and makes the bulb constantly powered.

It is easy to re-position the wiring when you change your mind. Not really a difficult task.

Or jumper the switch with a terminal block.

Thankyou for your helpful replies!! So it seems I jumped the gun buying Phillips Hue bulbs for my google home because evidently I just needed smart switches!

There is no trouble with the family using Phillips Hue bulbs as we are all used to it, although it can get frustrating when the assistant ever replies with “I’m afraid I don’t know how to do that yet” when evidently it does! As I said it’s mainly for guests who inevitably go to turn off the switch manually. I’ve seen the switch covers but each one costs £10 + then £29.99 for a dimmer remote to go over it is so much expense for very little gain. Equally hardwiring the switch also doesn’t work as people will go to use the switch and flick it a tonne of times and not understand to just ask for them to turn off.

Indeed many people start off with smart bulbs and then find the same issues and the better approach of smart switches.

Europe is very poorly served in terms of smart switches. All the better products are US only e.g. Lutron Caseta. The following are however available options.

LightWave RF - has multi-gang options, has both switch and dimmer options but a multi-gang plate can only be one or the other. A lot of people consider their appearance to be ‘aesthetically challenged’.

The Den range, see - https://getden.co.uk/ very new. A lot more attractive than LightWave RF but so new that there are a limited range of products. Again like LightWave RF you cannot mix dimmers and switches in the same plate. With the switches when you remote control them they actually move!

Fibaro (and other similar Z-Wave brands). With these products you need to fit a module either behind a traditional switch or in the ceiling void. If you use ‘momentary’ switches these can do both on/off and dimming control with a matching module. Unless you use very deep back boxes you will find it hard to fit more than one module behind a standard square switch plate. However potentially you can create 1, 2, 3 or 4-gang options and have any mix of switch and dimmers you want. It is even possible with Fibaro at least to do pull cord switches again using a momentary (pull cord) switch.

Insteon. A brand many people have forgotten about in the UK due to their current/past poor sales/marketing this side of the pond. They use a mix of the venerable X10 protocol and their own proprietary protocol. In the US they do their own smart switches but once again these are not available outside the US. However they do also do smart modules similar to the Fibaro ones and these are available in the UK and Europe. Again like Fibaro these can be used with standard wired switches including momentary switches and you can mix switches and dimmers in a single multi gang wall plate. Unlike Fibaro they also do matching plugin switches and dimmers which can be used with table lamps. Insteon have in the past done a HomeKit gateway which is currently discontinued but there is hope they will release a replacement one.

To summarise, if you want to have the option of 1, 2, 3 and 4 gang switch plates then the following are possibilities.

PS. Philips have recently issued a software update that partially addresses one of the big drawbacks of their smart bulb solution. Now if power is turned off e.g. at a wall switch to one of their smart bulbs and later switched back on it will restore the state of the bulb to what it was before the power was turned off. So instead of being turned back on to the default 100% white it might return to say 50% red or off or whatever you had set it to. This still cannot solve the problem of needing to actually physically turn the wall switch back on.

PPS. The one area smart wall switches fall down on is that they do not support colour control.