did you have any issues getting this running on V2 hub?Mine told me to set the password, then said it didn’t match…Was looking to avoid installing all the SAMI software just to set the device password…

Yeah the Sammie app is a real battery killer too. I had an issue with the password but just powered through it and it stuck. Can’t remember exactly what the order of things was, but just enter it and go to ‘next’ where ever you can. (c;

I love what’s happening with SmartTiles! I absolutely could see it as part of the ideal solution. But to be clear, I’m mostly talking about hardware here. Like many folks here, I love hacking solutions. But no one in my house wants to see a tablet hanging from the wall (my kids would see such a thing as a target intentionally placed as a challenge to them). So I’d pay for a hardware solution that could be cleanly installed, and ran SmartTiles and/or other front ends.

Where does SmartTiles fall short

It doesn’t, just lacks the physical device. Oh wait…This is IT! 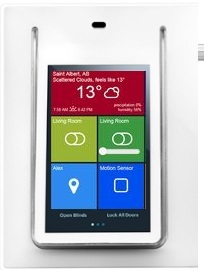 So I’d pay for a hardware solution that could be cleanly installed,

Hardware is hard… But with the magic of Kickstarter and IndieGogo, hundreds of enterprises are running off with your money building innovative hardware.

Lookup “BRight Switch”… I haven’t checked on it recently.

But I’d love to figure out what’s the minimum viable product here, really. What would be the minimum you’d expect from $150±, that would satisfy your requirements.

All of my switches are placebos (non load bearing). All they do is send commands to SmartThings. That way, at times I can have them do one thing, and at others something else.

Cool. Are you just using regular switches, sans the load line or something else?

Tell me about it (co-founded a venture that shipped hardware to 50k users in past 6 mo). I still back regularly because hardware’s hard, not impossible. While I’d love a fully integrated touchscreen solution, I’d also pay for an it-just-works-and-looks-great bracket that allows me to repurpose and easily power an old phone/tablet.

I’m pretty sure that’s most of it. There is a timed event that fires up the BR system to Morning Drive in the morning. Now you have kids and dogs to manage, but it is simply a matter of knowing what they routinely do, where they may access and when, and design the necessary triggers and exclusions for what you want to have happen. Oh forgot motion in closet = lights for a few minutes.

But I get what you are saying…I never really thought about using combinations of motion sensors to understand things better. May have to research more when I have more sensors. Start by just automating a few things then bring in the smarts. Some of your ideas are really interesting like accent lights in kitchen which I’ll have in my new house.

Are you doing those “combination rules” on motion sensors using the stock apps? I ask for the V2 local stuff? Just curious. I think a rules engine would be GRRRRRRREAT but I know it’s low on their priority list and I know other 3rd parties are developing it but would like something that I know won’t break if ST makes a change.

Either way…it’s interesting to see people’s set up like that as it does give me a few more ideas. At the moment, I am “beta testing” my home trying to determine what I need in the new home and testing products so very complicated scenarios I can’t test but that is very insightful…thanks Scott appreciate it.

and easily power an old phone/tablet.

That’s where the problem lies, I think.

You want, most touchscreen controller to be at lightswitch level, not down where most outlets are.

As we know, many (most!) old homes don’t even have Neutral wires at the lightswitch, so they can’t even be used as a power source, even if replaced with an outlet.

It is usually permissible to run low voltage wire inside walls, but gotta source the 5v somewhere.

I’ve attached an older iPad to the wall. It uses the phone version of the app but it works.

I’ve seen a few setups using an old tablet with a Qi charger mounted in the wall and magnets to hold the tablet in place. You just need to have an outlet close enough that you can plug in the wall wart and fish the 5V wire in the wall to the Qi pad.

many (most!) old homes don’t even have Neutral wires at the lightswitch

I’m sure there’re some really old homes that don’t have neutral, but all homes built within last 30 years have one. All modern LED-capable wall dimmers and switches require neutral anyway.

Are you doing those “combination rules” on motion sensors using the stock apps?

Some are, some aren’t. The stuff controlling the AV gear uses an iTach, to which I send the IR commands from HAM Bridge. While you could do this with just a SmartApp, when you start controlling a half dozen or more AV components, it is much easier (and more reliable, timing wise) to write a script and execute it from a computer. It is also much easier to edit a simple text file than to have to go into multiple SmartApps and/or deviceTypes to change things up.

All of my HUE lighting scenes are controlled the same way (and using scripts gets you features not support in the SmartThings integration (transitionTimes, Alerts, ColorCycling).

I’m sure there’re some really old homes that don’t have neutral, but all homes built within last 30 years have one.

Well… I wonder what proportion of homes in the USA were built in the last 30 years?
In San Francisco, my home, among thousands and thousands of others, were built prior to 1940!

Hard to find stats with just a quick search, but Forbes article founds that ~25% of homes for sale in certain metro markets where built prior to 1940, though only 1% in Las Vegas, Fort Lauderdale, Phoenix, etc.

I think it would be beneficial to have a repository of ideas and how they were implemented so that people could review. More than smartapps but how they make them work…almost like recipes and what they accomplish. It would have to be user driven though. I think your ideas on how you leverage your hue would be interesting (i have them too but not nearly as integrated).

People come up with great ideas and others don’t know they are great until they here it. Should be a place that’s more than just a “use two apps to control living room lights” and more this setting, with this app, and this and that accomplishes this using these modes and routines. Something like that would be beneficial no?

Hmmmm…I KNOW ST doesn’t have the time to create something like this. Maybe someone (or groups) should take it on…mmmmmmm…got me wonderin’

I think it would be beneficial to have a repository of ideas and how they were implemented so that people could review. More than smartapps but how they make them work…almost like recipes and what they accomplish. It would have to be user driven though. I think your ideas on how you leverage your hue would be interesting (i have them too but not nearly as integrated).

People come up with great ideas and others don’t know they are great until they here it. Should be a place that’s more than just a “use two apps to control living room lights” and more this setting, with this app, and this and that accomplishes this using these modes and routines.

We have a “Projects” category in the forums, I think that’s where most people put stuff like that. Some very cool ideas there.

Yeah I have see that…I was just thinking about one that was catered to it as opposed to just a forum post…again like a recipe card…it’s wishful thinking I know. Like I said, maybe I’ll talk about it with someone…give back

I have a page on my site devoted to some of the things I have done with SmartThings that I think are cool. It is a small sampling, but I think the highlights are there.

@scottinpollock You are the real James Bond! Hats off!

Authors are free to put in as much detail as they want in project posts, and you can always ask for more.

Seriously, dude, how much more of a “recipe” do you need than the following?

I built a wooden cube that has a sensor inside that talks to the Mood Cube SmartApp to control my Hue bulbs. Each face has a colored wooden inlay (held in place by magnets) that tells you which color scene will be activated. Hidden behind two of the circles is the bolt that holds the cube together. It can be easily disassembled when I need to replace the batteries. Here’s a video: [image] Just thought I’d share. I can post photos of the build process if anyone is interested. EDIT: Added some photos of the process since a couple folks asked. Enjoy! The building blocks. I bought these online somewhere. [image] Glue and clamp. Each half (4 little cubes) were done separately. [image] Drill a hole for the Multi Sensor [image] Multi Sensor removed from plastic casing and fits s…

Updated 12 November 2015 after Amazon added “Triggers” to their IFTTT Channel for Alexa As valuable as I personally found this project, and as much as I learned in doing it, as of 12 November 2015 it’s now no longer necessary. Amazon has added verbal triggers to their IFTTT channel. So you can say anything you want to as a trigger to Alexa and use that as the “if” for an IFTTT recipe, and have that trigger anything that has an IFTTT “that” channel. So SmartThings, Philips Hue, Harmony activities, etc. No virtual switches needed, no synch issues. It really is that easy.

If you’re new to IFTTT, here’s a good overview: You may still want to use the direct Harmony/SmartThings integration to control certain aspects of TV watching, like limiting your kids to 30 minutes of Net…

There are a number of topics in the Project category that have plenty of detail.