A wooden cube that controls lighting

I built a wooden cube that has a sensor inside that talks to the Mood Cube SmartApp to control my Hue bulbs. Each face has a colored wooden inlay (held in place by magnets) that tells you which color scene will be activated. Hidden behind two of the circles is the bolt that holds the cube together. It can be easily disassembled when I need to replace the batteries. 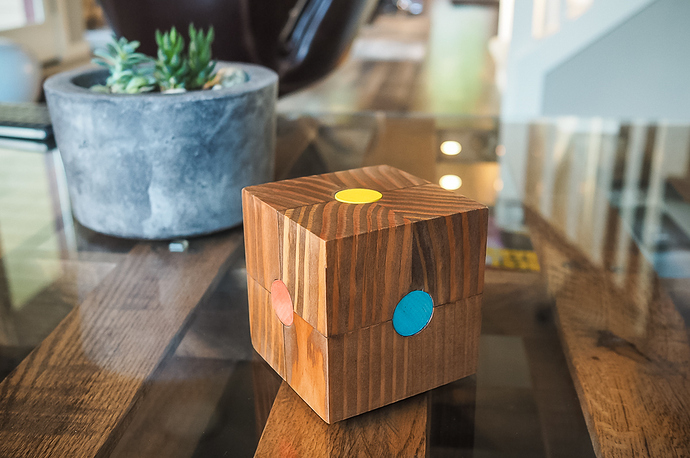 EDIT: Added some photos of the process since a couple folks asked. Enjoy!

The building blocks. I bought these online somewhere. 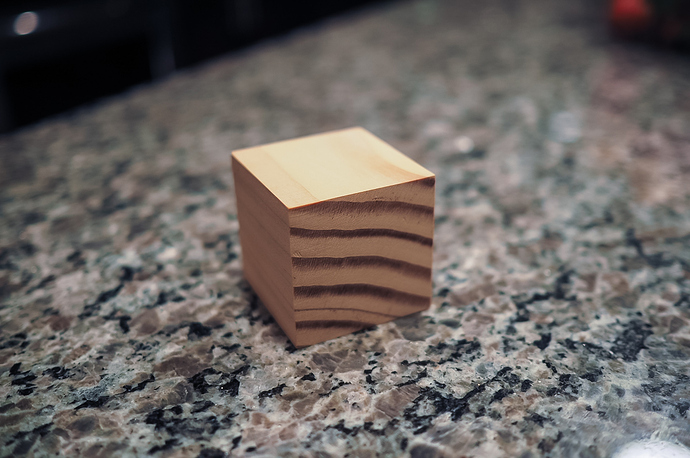 Glue and clamp. Each half (4 little cubes) were done separately. 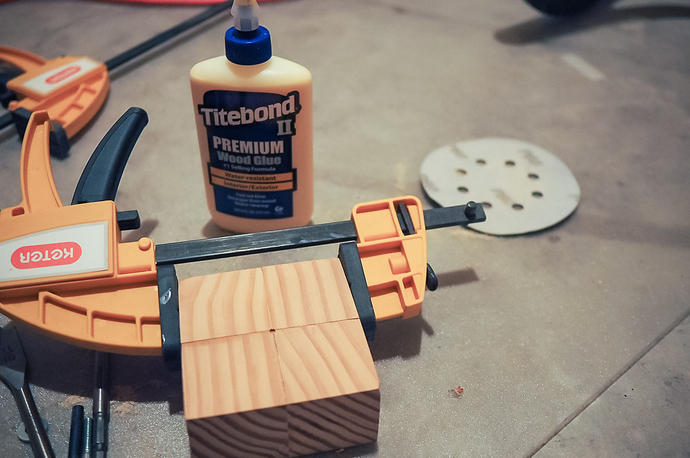 Drill a hole for the Multi Sensor 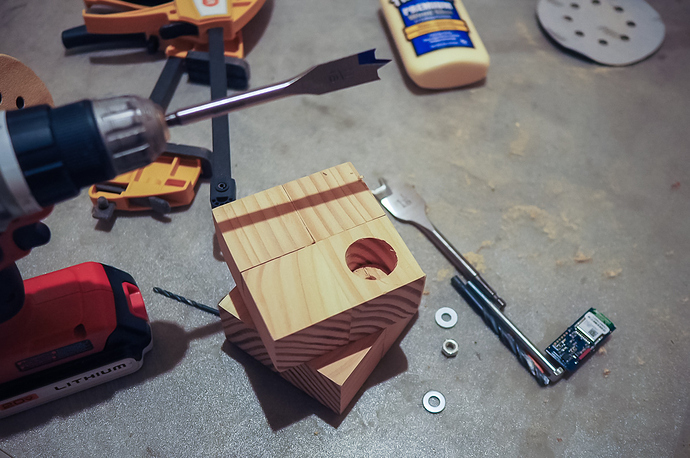 Multi Sensor removed from plastic casing and fits snuggly into the hole. I chipped a piece off by accident when drilling… I’m gonna fill it up with stainable wood fill later. 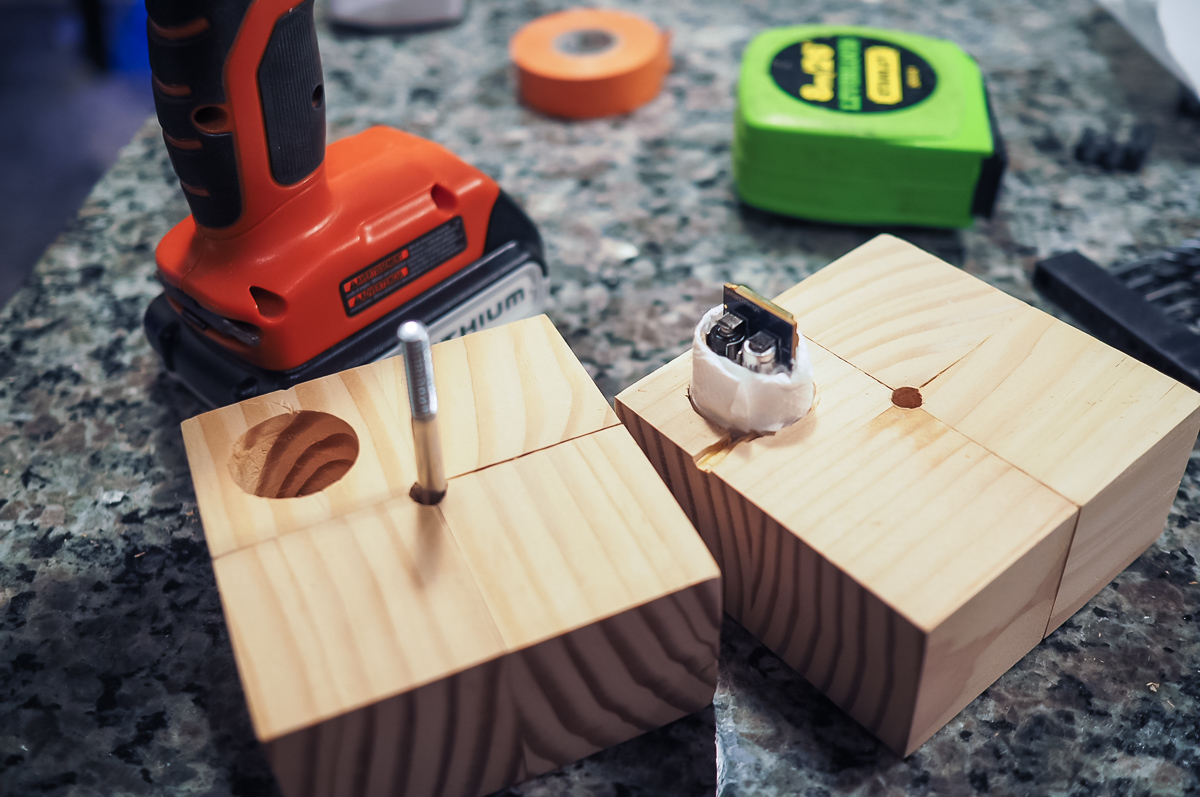 I needed to use Forstner bits to drill shallow holes on the faces of the cubes to hold the circular wooden inlays. These bits drill holes with flat bottoms. 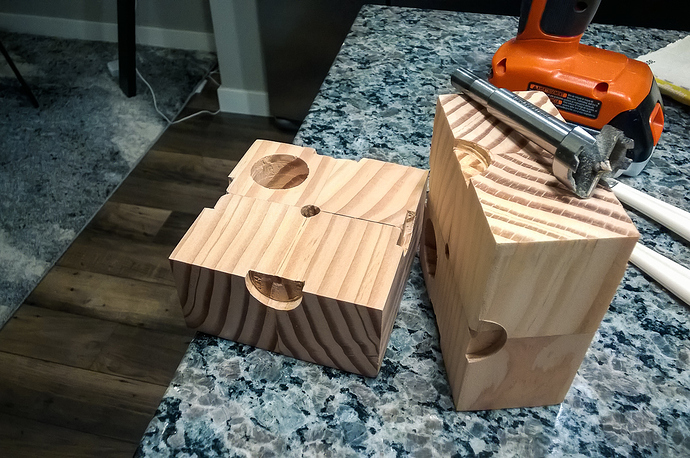 Prestain and stain. I used Minwax Special Walnut. You can also see where where the bolt goes in. This let’s me easily disassemble the cube into two halves for when the Multi Sensor batteries need to be replaced. 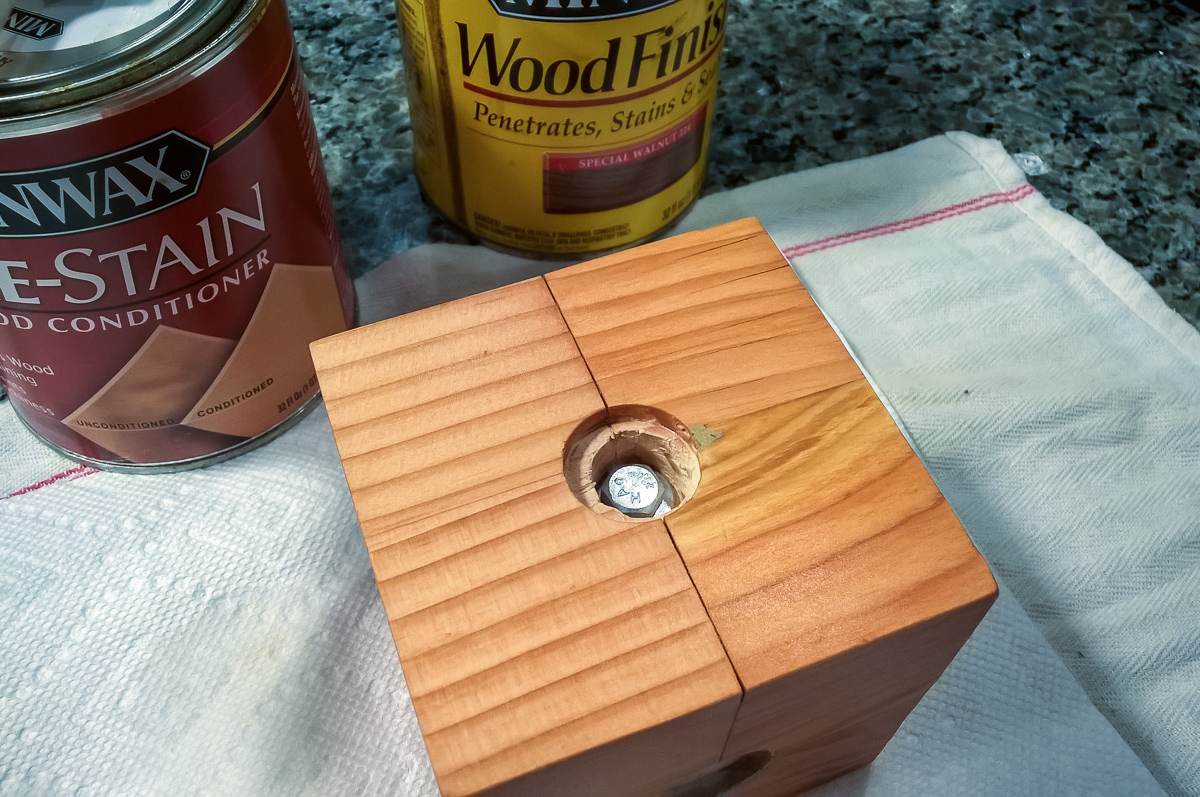 I accidentally chipped the cube in several places so I filled the imperfections with stainable wood fill before staining. Also… this is where I sanded the cube down a lot! It took a while since the little cubes I started out with were really uneven. 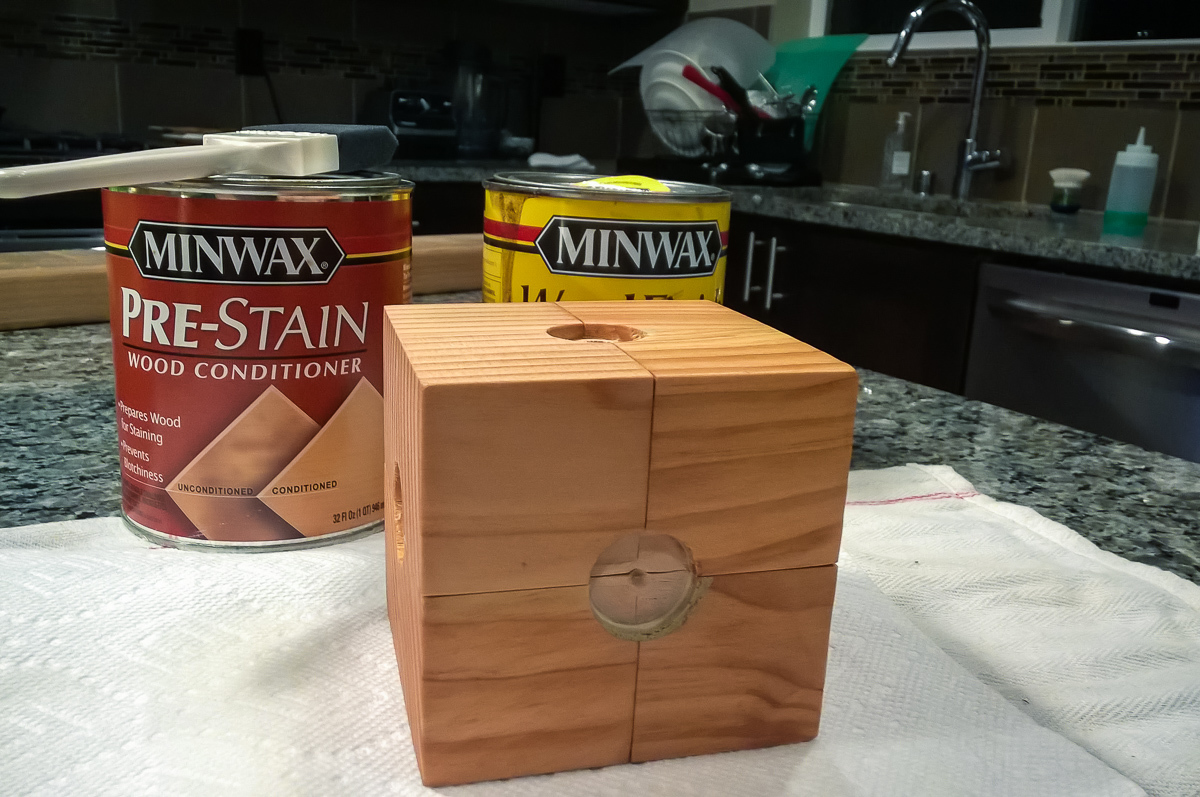 Stain has dried. Coloring the wooden coin thingies with watercolor. I bought these little discs from the “hard to find” drawers in the hardware department at Lowes. 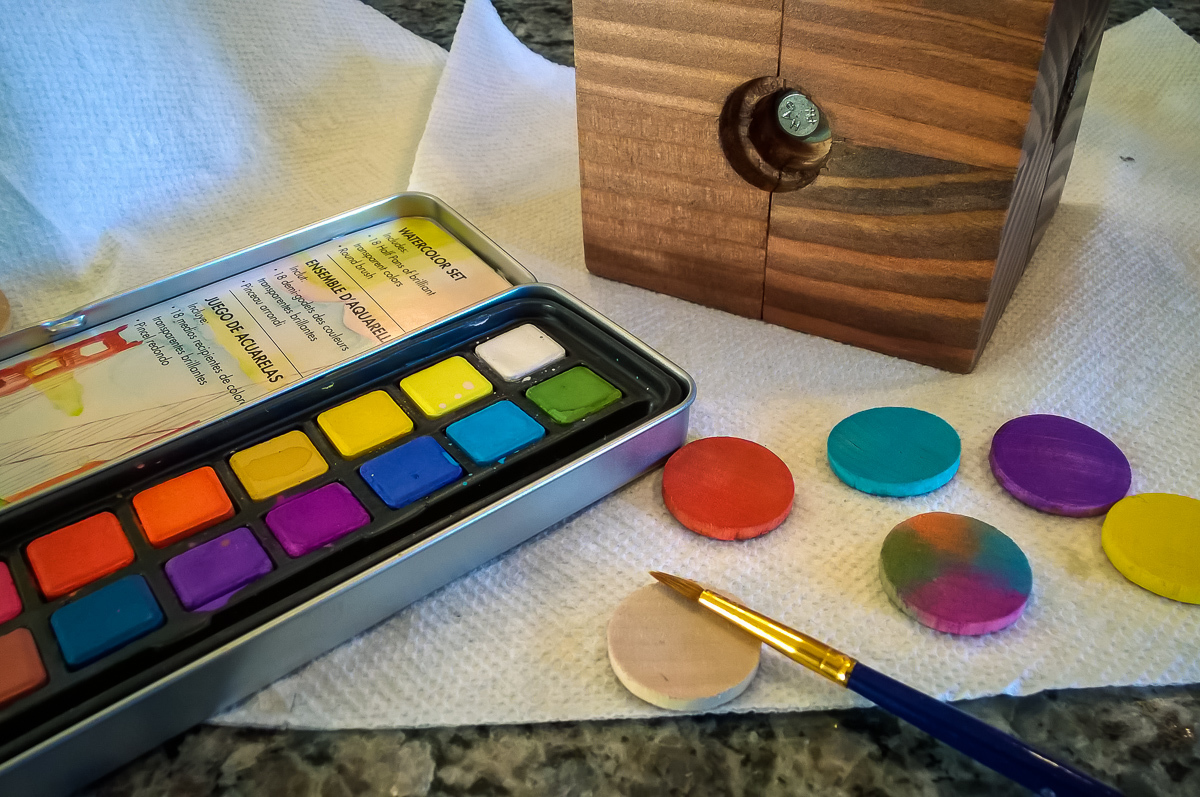 I glued mini neodymium magnets into the slots to hold the colored wood circles. One of them sticks right to the bolt.

I finished it with one clear coat of water-based polyurethane (not pictured). All done! 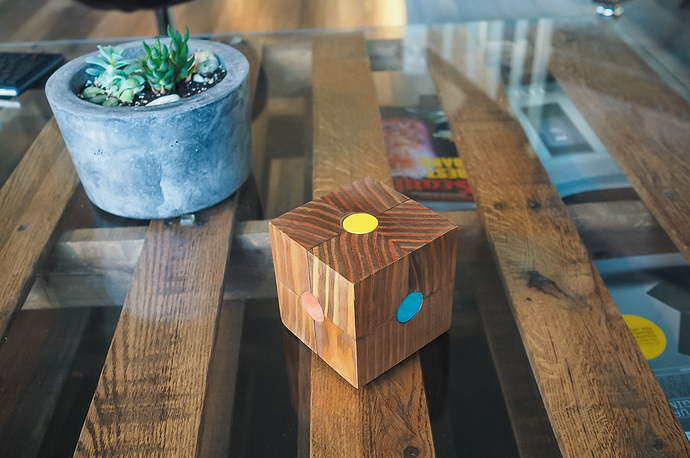 What sensor did you use? ST Multi for it’s tilt?

It’s a SmartSense Multi Sensor. The SmartApp can be found by tapping the “+” icon then going to More > SmartThings Labs > Mood Cube

Wow that’s a great looking cube my friend! I have the same thing but I made mine out of colored lego bricks because I wasn’t sure how to go about making a nice looking cube. Anyway you could show us how you went about this?

Thanks! I’ll post some pictures of the process this week.

Look forward to it!

An idea I’ve been thinking about is making a cube out of acrylic squares and each side would light up a certain color. Possibly have an ardruino controlling LEDs to do this… and instead of having to constantly swap out batteries, have a charging base that took advantage of inductive wireless charging. Waiting until payday to buy the necessary hardwre to do this but if anyone knows a charging schematic that might work, I would gladly appreciate some help!

I’ll post my progress with this project as it unfolds.

The fact that SmartThings is open source really drives innovation. Stoked to be apart of this community.

Pics posted at the top of the thread

This is such a great idea, I had to make one too. For mine, I generated some simple CAD files using

Made a few small tweaks to optimize placement and add text, then sent the files over to: https://www.ponoko.com to have them laser cut in wood. Ponoko came up somewhere else in the forums where they was used to create an interface for a tablet-based ST+SmartTiles home controller. The best part here – first $20 is free for new customers! I ended up only having to pay S&H, which was just under $8. Once I had the cube assembled with wood glue and multisensor stuck inside in, I ended up installing the Mood Cube SmartApp variant that controls “Hello, Home Phrases” instead of controlling lighting scenes. There were two user cases I was trying to solve:

As an added benefit, WAF is through-the-roof – she loves being able to control the lights without reaching for the phone, AND the aesthetic of wood (instead of a plastic remote control) is more to her style. 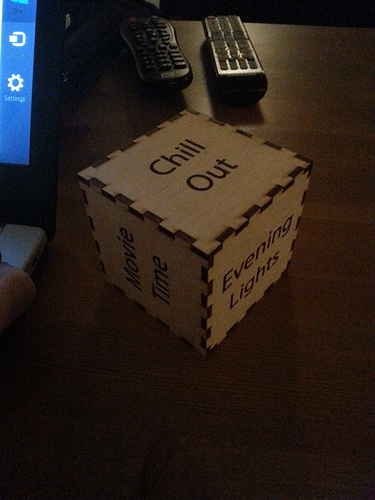 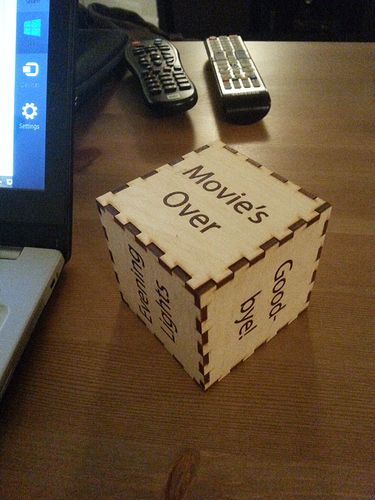 Thanks Pete for the inspiration – It was a brilliant idea and I hope to see more people expanding on your original design!

This is an amazing idea. Sure to send my SAF through the roof. Do you mind sharing your plans?Also, is the box openable (e.g. for adjustments, battery changes)?

@GuyInATie great work! Glad to see the community bouncing ideas of each other.

How’s the weight? A little heft makes it feel nice. You could maybe put something inside to weight it down.

(To anyone in the future that reads this and finds the links have expired – just drop me a note and I’ll update the URLs).

@Pete The cube’s heft is decent enough – it hasn’t been inadvertently knocked over by any cats or people. Being hollow, it’s obviously not too heavy, but I don’t find that to be a problem. One thing that helps – the cube has one particular face that’s up /most/ of the time. The multisensor is on the opposite face so the weight is on the bottom of the cube most of the time.

@ggbjr I ended up solidly gluing 5 of the sides together with Krazy Glue’s wood glue (basically crazy glue optimized for wood), and then used a piece of duct tape on the inside to make the 6th side kind of like a flap. To keep it closed I used a tiny dob of glue to hold the last side on. So far, it hasn’t accidently opened up, and in tests it was easy to open the flap up and get access to the multisensor.

FWIW, I have 2 more multisensors and a water sensor that aren’t currently in use. I’m trying to come up with additional creative ideas like the cube… For example, I saw someone in the forums connect a water sensor to a floor pressure mat and generate a signal when someone stands on it. I tested the water sensor I have here (it’s a different brand) and it functions basically the same – when the two metal terminals make electrical contact, it sends a signal. I’m thinking about things like running a bunch of wire through the inside of our dresser so when any drawer opens up it sends a signal… Just not sure what I’d have the house do in response yet… Another idea is to stick the multisensor underneath my office swivel chair to monitor whether I’m facing the desk or not. Again, not sure what I’d have the house do in response, but it’s these types of unconventional projects I’m thinking about…

Forgive the n00b question, but is the the ST multisensor the only one that works with this app?

The key feature used by the SmartApp is its orientation sensors. I think other companies make and sell these types of devices, but I don’t know any specific ones off the top of my head. So, short answer: Yes, to the best of my knowledge the ST multisensor is the only device for this app (but my knowledge is limited!).

Any device with an accelerometer that shows up as three axis orientation should work. These are typically described as a “tilt sensor.” Just make sure it has three axis reporting, not just two.

Anyone tried the Mood Cube app? This is what it does: you take a SmartSense Multisensor and put it inside a cube/box. Then, you can assign lighting configurations for each of the 6 sides. Any side that is currently facing up gets activated. It is awesome. Bug: There is one critical feature that does not work for me. For each of the 6 scenes, you can capture the current state of your lights and save it to that scene. It worked for me the first time, but every capture since then has only reproduced colors from the first capture. I’m using it with Philips Hue bulbs + light strip. The only way to set my colors is to manually enter in the hue/saturation numbers, which I wouldn’t even know how to go about figuring out. If you haven’t tried this app out yet, give it a shot. If you have any iss…

Hey pete! Ive been MIA for a while. Thanks a ton for posting the pics!

Hi Community
I have been inspired to make a cube also. Thank you… Pete & GuyInATie.
I use the multipurpose sensor to turn off the light as I exit the room we use to watch television. ( den )

wait, back up a minute… I use a smart things motion sensor as I enter the room (also connected to Amazon Echo) for on & off purpose located in yet another room more centrally located.

So, as i exit the room I was approaching echo & say turn off den lights. PITA… So the idea for a cube makes perfect sense. Doesn’t hurt that I saw one demoed in Somerville, MA.

My cube is set to just pickup and the movement will shut off the lights. AWESOME …But, what i have discovered is that as I move the cube & head for the door… the motion sensor picks up the movement & damn it works and turns the lights back on. I have considered moving the cube just past the door and then I have moved beyond the sensor’s view. It would be nice if there was a time delay of the motion sensor upon exit to “forgive the movement” and then I can place the cube in the room where we watch TV.

As i write this I may try a different placement of the motion sensor that picks up entry movement.

Thank you again to the Community 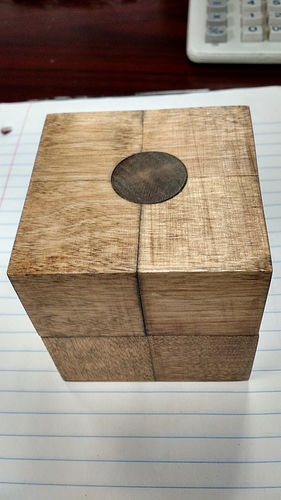 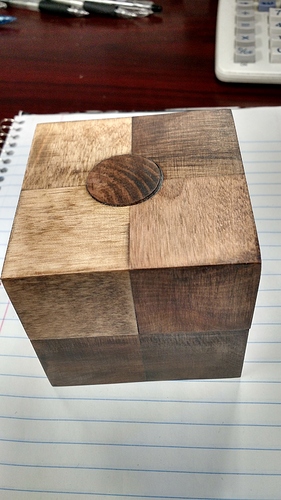 I made one to control dimming. 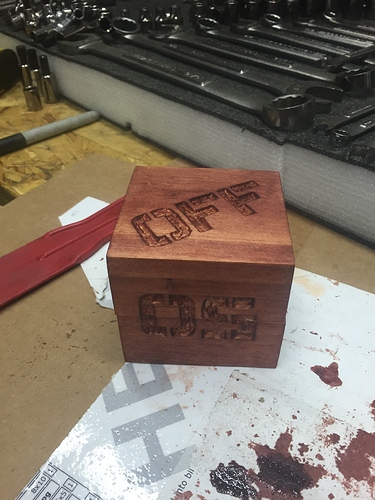 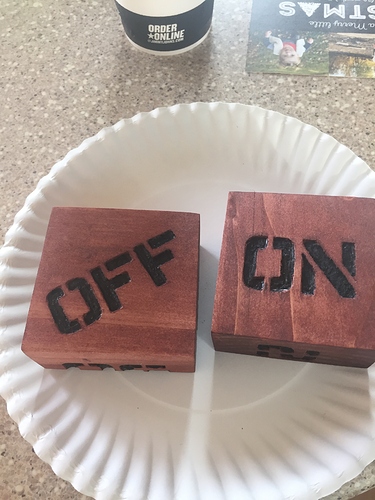