I have few rooms in my house which do not have ceiling light fixtures, so the wall switch controls an outlet. of course the outlet it controls is not the one I want to plug a lamp into. so what I would like to do is just remove the switch, connect the wires together and stick a wireless wall switch over the hole and call it a day.

I know that I could use the aeon labs mini-mote but I just want something that looks like a normal wall switch.

I have been hunting but I have not come up with a great solution for this. I am actually really surprised because I would think this is a fairly common scenario.

I found this generic GE wireless wall switch http://www.amazon.com/GE-18279-Wireless-Switch-Receiver/dp/B00R7Q7PT4/ref=sr_1_3?ie=UTF8&qid=1446741067&sr=8-3&keywords=wireless+switch#Ask
which is just about hat I am looking for but I would like something that works with ST so that I can control it from the switch or from smartthings.

If you’re going to put it in place of a switch anyway, why not use a wired one like a GE Z-wave toggle http://amzn.to/1MBWh0v and just don’t connect anything to the load. That way its wired in (no batteries) and perfectly takes the place of your old switch.

oh I didn’t realize that it was ok to install them without connecting the load. so how would the wiring for that look? although I would not want the switch to control the outlet, I would still want constant power to the outlet.

oh that is perfect! thank you for that!

That’s not how regular switched outlets work. Check this diagram. Most switched outlets only switch half of the outlet. In the diagram, OP would discard the red wire, but need to replace the outlet or use a short jumper to tie the two hot screws together. (the shunt between the 2 hot terminals can’t be put back after removing) 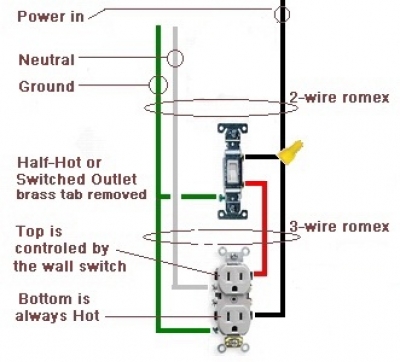 Agree with this and second this approach. I could never hard wire a switched outlet in my sons bedroom because of the HVAC equipment over his bedroom so I ended up putting a Zwave switch in the controls nothing with its load but with a SmartLights app, I turn on a Zwave outlet in his room when this light switch is turned on, and also off. I have done the same in my master since then.