I’m looking for a way to monitor sump pumps running. I know that I could use something like the Iris smart plug but I have two issues with that:

In the case of a column pump, I could tap into its wiring after the float switch. But in another place I have a submersible pump and the monitor would have to be at the plug.

In the case of a column pump, I could tap into its wiring after the float switch. But in another place I have a submersible pump and the monitor would have to be at the plug.

Or at the panel?

The Aeon Labs Smart Energy Monitor is a low-cost energy monitor for the entire home. It can wirelessly report immediate wattage and kWh usage to central control point gateways such as the and can be easily and...

I don’t need the sophisticated power monitoring. I only care if the pump is running; not power consumption.

Having a switch just introduces a way to accidentally disable the pump. I absolutely hate the idea of any switching capability. It just invites disaster.

You could go with the option above but you will still need to monitor the power.

Although you are against it, I would still consider an Iris Smart Plug.

If power is above x, them pump is on.
Else, pump is off.

As far as the switch:
If switch is off
Then turn on

Could also stick a vibration sensor on the pump…

You are making it harder than it has to be.

This is somewhat true. But I don’t think I want ST having influence over whether my sump pump is on or not. Even if you make a custom handler and remove the switch function it’s still not a good idea to introduce a smart plug on a sump pump.

The clamp power monitor is the way to go here.

I already have an Aeon energy monitor for the whole electrical panel. It seems like expensive overkill for such a simple task, assuming that 2 or 3 of them on the same hub is even possible.

The vibration sensors I’m finding seem to be for detecting glass breakage. I’m skeptical about how that would hold up to frequent sustained vibration and it’s almost certainly not an option for the submersible.

Thx for the suggestions so far, but I’m going to keep looking for a solution.

The power meter above is only $30…

I may try something like this. An active load creates bias voltage across the bridge rectifier that I could then feed to some simple contact detector (rather than the transformer, half-wave rectifier, and relay).

I just hoped there was an off-the-shelf solution.

Doubtful there’s an off the shelf solution. But that diagram is an invasive way to measure the load. I’m of the camp that would rather not introduce something that may fail to a sump pump. You only want a sump to stop working if the power goes out. The above has the potential to fail in other ways. 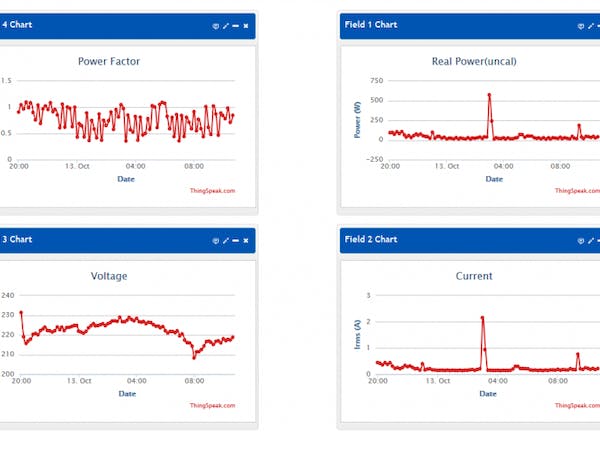 This project creates a real-power energy monitor using a NodeMCU module with ESP8266-12 and ADS1115. By Tisham Dhar.

smart plug with power is cheaper.

Simplest method is put in a flow switch and monitor that. Water moving = pump running.

it’s funny that you say putting a device into the plumbing is simple. Maybe you do it a lot - I find plumbing hard. I don’t like to sweat devices in (though it’s a bit easier then NPT) because I want to take them apart and put new stuff in. So it’s like double the work, sweat the NPT fittings AND screw in meter couplings or whatever else goes inline. Sharkbite, no way - google “Sharkbite problem” and I see enough issues that I’ll do something else to fit pipes.

Yes simple in theory. In practice, you got to plumb it, without leaks, and the flowswitch moves all the time. Don’t put it in a vertical section. Replace it when the moving part breaks or leaks. All to avoid doing the plug-in module for $22. Sure, you can do it, go nuts.

Not that it matters, this is primarily a hobby forum, but I design and manage commercial building control system projects for profit, so I don’t typically spend $200 in parts and time on a $22 project. Especially not to increase plumbing work with its greater risk.

Depends on type of plumbing. Most sumps I’ve seen use abs so no sweat(ing), just a hacksaw and glue.

Also the OP was really specific about NOT using a plug-in switch, so my reply was with that in mind.

We are on the same page about not adding a significant point of failure in something that has an important function. I would disagree that a bridge rectifier is very likely to fail though.

That said, the current transformers in that project you linkedto seem to be quite inexpensive. Particularly the small 10A. I think that I’ll look into connecting that to a zigbee/zwave contact sensor.