Does anyone know if someone is working on a device handler for these wall switches? Or if there is one out there that might work? I have one, which connects to the Hub but since I can’t find a working DH it doesn’t do anything.

I have tried the Aeon Wallmote, Popp(devolo, Z-wave.me) but I would like something that’s a bit more stable. If you have any suggestions of other switches please go ahead

Those are nice looking switches.

. Schneider’s Z wave devices are manufactured by Merten, so in order to look them up on the official Z wave alliance product site you have to look for Merten.

The problem you have likely run into is that the Schneider device uses a very different set of Z wave commands then the popp/develo/wallmote Devices do. Those devices rely on “Central scene” commands, and that’s what their device type handlers are set up to process.

The Schneider Connect line doesn’t use those at all. Instead, it relies completely on direct Association, which is why it talks about the limit of five devices being controlled. 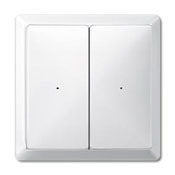 It should be fairly easy to set up this switch to control other zwave devices in the same room but the problem is going to be keeping the SmartThings mobile app in sync or using the switch with anything other than a nearby Z wave device. To do that, you have to include the hub in each of the association groups and it just gets more complicated.

@adamv might be able to say more about the best DTH to adapt for these.

We should add that the real heart of the Connect system is an in wall micro, not unlike the Fibaro micro.

The flush-mounted CONNECT radio receiver, 1-gang universal dimmer will be referred to below as "dimmer". The dimmer is used to switch and dim luminaires (see technical data) via radio signal and via an extension push-button connected...

It’s just that Merten has gone the full distance from a consumer standpoint and provided a selection of wall switches, including battery operated auxiliary ones, to go with the micro.

So the issue with making it work if it doesn’t do central scene commands is that there is no guarantee that smartthings will be able to distinguish which rocker (left or right) is being pressed.

but if there is no identification in the command as to which rocker is being used, then it will only know what command is being sent e.g. on or off… but not which rocker.

When I get some time I’ll look at the documentation as there may be some way we can trick it - e.g. if the device supports multiple types of commands (like on, off, increment up, down etc) then maybe a configuration whereby we configure the device such that each button sends a totally different command to the hub, would then allow the DTH to know which button had really been pressed

Alright, thanks for clearing things up

If you were to recommend other wall switches for Smartthings, which would that be? I have the possibility to have some connected to power but it would be good to have a quality wireless option as well.

Have you had a chance to look at the FAQ yet?

Would you recommend the TBK home switches?

Would you recommend the TBK home switches?

I hear good things about them functionally, but I doubt if the build quality is quite as good as the Schneider switches. There are just a lot of different factors that go into selecting switches, different people have different preferences.

Hi,
I am completely new to ST and wonder if anyone who knows if there is a simple instruction / step-by-step guide available to get these (single / double) schneider buttons to work with the ST hub?

I bought these for turning on / off and dimming different lights, but forgot checking compability with ST hub.
I now understand there might be some issues, or perhaps these has been solved by someone already?
My idea was that the single button would control 1 light and the double would control 2 lights.
Press top button turn on
Press bottom turn off.
Holding top dim up
Holding bottom button for dimming down.

Perhaps not exactly like that, but similar (or anything at all really…)

Someone that can help me with this? DH code available somewhere?

Hi,
I’m the owner of about 15 Merten 2-gang push-buttons since 7 years back. They have caused me a lot of pain over the years but I still think they look great.
(I have been using Vera from Micasaverde for the last 8 years, but I decided to give Smartthings a try because my Vera stopped working. The Merten push-buttons were a struggle during the years with Vera but did partially work fine. )
Is there any chance this device could work on Smartthings (within a few month time) or should I look for new different buttons? Is there anything I can do? (I not a developer.)

Has there been any progress on handleds for these switches?

Did you happen to find some time to look into this @AdamV?

I’m upgrading the switches in our home, and these would be the perfect match for all the other Exxact switches and outlets we’re using.