I assume this is the one you found, but if not, this is probably what you’d need: 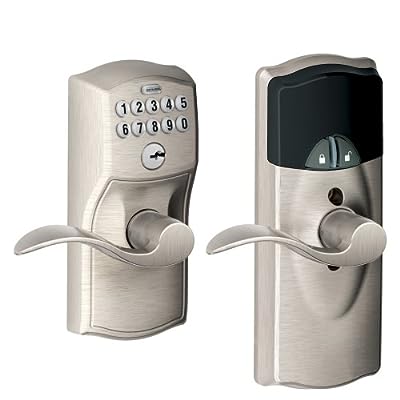 You’ll love it, I think. I bought the deadbolt setup for my front door last month, but wanted one for the door in the garage, so scoured ebay patiently for a deal on a used one, got it for $60 because it needed some hardware that was missing. Score!

Yep! that’s the one I will buy! Thanks Colin

Just an FYI - I had the Schlage Connect joined to a Staples Connect hub prior to purchasing my ST v2 hub. Even though I removed it from my SC hub in order to get it to successfully join my ST hub I had to do a factory reset (when trying to join it to my ST hub it would give an error about a security token or that a secure connection couldn’t be made). I don’t remember the exact steps but Google is your friend should you need to do this. After the full reset it finally paired with my ST hub and works just fine using the ST App.

Also check Amazon site as they have some kind of deal on Schalge if shipped and sold by Amazon.

The FE599 and BE469 (top line) are very different locks with different purposes. I have all the Schlage models but these are my favorites.

The 469 is more of a motorized deadbolt where as the 599 is more of a door level with no motorized parts (it has a pin lock internal that’s motorized). the 469 has an alarm which I find useful to know if someone’s tampering or using the door or entering wrong codes. However with a motorized deadbolt is VERY sensitive to door alignment, if the door is slightly mis aligned (say closed hard and bounces back a bit or not closed enough) the deadlock won’t engage. The 599 is more resilient that way since it the lever engages as soon as you shut it (no bounce back issues) and the internal pin disengages the lever to prevent the lever from turning when you remotely lock it.
The 599 however only supports 4 digit pins and the 469 goes upto 8 (if that matters to you). Really you need to think about the usage. I find the 599 perfect for a deck/garage door and the 469 for the main door. Having said that I’m also using the 599 for another entrance door which isn’t used frequently.
Battery wise key thing to note while the 469 surprisingly uses less battery than the 599 (and I use the 469 more than the 599 in a daily basis) however it dies when the battery hits 50% where as the 599 goes on below 30% (it’s been a year now and my 599 is still as 35% where as I had to change my 469 batteries when it hit 50%). That because the motorized deadbolt uses more power and causes a higher voltage drop so at 50% the voltage drop is to low for the lock (using alkaline duracell) and it shuts down. Make sure you replace the batter no later than 50% of the 469 otherwise you may be like me and up trying to remotely lock it and it won’t work.

Oh one more thing the 599 firmware has a bug (seen this happen on multiple locks). Sometimes under certain conditions (not known yet) it can get into a loop and keeps sending zwave status updates to the hub every few seconds. It’s just stuck in aloop and the only way to break out of it is to remove the batteries and reinsert them (turn it on/off). This can cause excessive battery drain. Again I’m a dev so I keep pushing the limits and testing the locks maybe I ran into a race condition. Ive seen this happen on all the 599’s I have about 1 times each in the last year. It’s a slow drain but a drain never the less, i.e. it dropped like 1% a day where as normally it’ll got a week before dropping 1%

Thank @RBoy! the 599 is the one that fits the current measurments so it’s what I have to go with

Thanks again @RBoy, let me know if there is anything I can do to avoid that?

Great idea, I did end up buying it from Amazon! Thanks @smart

Looks good but the schlage century in nickel is more to my tastes , I assume the difference is only skin deep?

I have the schlage lever key pad one Chris @cldlhd , and so far it is working good

To anyone; what was your experience with installation? I will likely be replacing an August lock in the next couple of months and I am looking to the Schlage Connect as my replacement. The august was quite simple to install and use but this was before I really started putting in my dedicated HA system; sorta just getting my foot in the conceptual door. I know the Schlage requires you to remove the entirety of the existing lock but my question is more of the size. their requirements seem pretty specific so I would like to get a sort of aggregate of the different installation experiences to help move me along. Thanks!

We’ve installed multiple smart locks, including Schlage, replacing existing deadbolts. Four so far. They’ve all been straightforward. One time the hole the deadbolt slides into had to be shaved out a little bit because the bolt was catching, but that wasn’t the Schlage.

It never goes as fast as they say it will, but it’s always taken less than an hour.

Installing the hardware is essentially the same as replacing any deadbolt with the single exception of having to connect the radio module with the cable to the motherboard inside the lock and then putting in the batteries. But that really is as simple as it sounds.

Schlage has a really good install video that shows exactly what you need to measure and takes you through everything step-by-step. If you watch that it should answer your questions.

The most important thing is that your existing deadbolt slide easily in and out of the door frame just by turning the Turnbolt with one hand. If you have to press on the door, lift up on the knob, press on the door frame, or turn with force, then there’s an alignment issue and you need to resolve that before installing the automated lock.

We too have a great experience with Schlage. No issues whatsoever. Just remember to pair it to the hub before you install it. My hub was more than 10 feet away from the door, and it wouldn’t pair, so I had to uninstall it, pair it, then re-install it

… Schlage instructions state to not power the deadbolt up without it being installed… it needs to learn the travel extent of the deadbolt. Glad it worked for you as is, but being able to move the hub is usually preferable. Surprised you had issues, I was well over 10 ft and no problems.

I wan’t aware of that @Toasty Colin, but thanks for the info for future projects

Not to get off topic but I was wondering if anyone knows what model of Schlage lock has a tapered deadbolt aside from the connected series? Are there any?

I acutally am not even sure that my BE469’s have a tapered deadbolt. I’ll have to check, but I don’t think they do.