Can the amazon replacement battery cr2477 be used to replace the Samsung motion sensor battery?
Thanks

Isn’t that a different type of battery than the one that comes with it?

Yes but I can’t find Panasonic batteries on amazon.

No I mean according to the product page, they take a different type (not brand) of battery, CR2450.

The battery in the morion sensor says 2477. I purchased the motion sensor last black Friday at bestbuy. How can I tell if it’s the 2014 model?

The recommended 2477 batteries from Amazon I purchased work fine. As a note, the same batteries below in a double pack (10 total) can be had for $14.59. 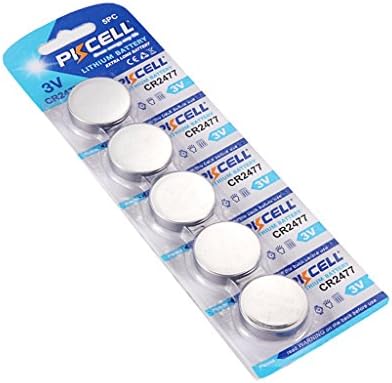 Which SmartThings motion sensor model do I have?

That’s what I have. 2014 model. Dam bestbuy for selling that model. Not going to worry…I’ll keep it until it dies. I have my eye on the aeotec morion sensor but that is expensive. I’m looking for a few.

Iris motion sensors are cheap and they work well.

I may grab a fee of them.next time lowes has its sale.

Just make sure it’s the 2nd generation sensor in the purple box. If they still have any of the first gen sensors in the clamshell package, those don’t work with ST.

Thanks for letting me know. I may just mix it up with motion sensors and see what works best but I really do like the aeotec motion sensor but expensive.

The Reviews on these are horrible

I have two of the motion sensors and have had them installed and functioning since about last December and they are both down to 1%. Both mine are the models with the IR sensor in the upper left corner and they both have CR2477 batteries.

It’s a gross oversight on Samsung’s part to NOT have the battery size listed on either the outside of the box or in the instruction pamphlet!

Also there is much ambiguity here on the net as to whether the sensor uses CR2477 or CR2450!!

My Samsung motion sensor STS-IRM-250 says 1% battery left…but when I pull it out it reads 3.0 V on digital meter.
HOW is that possible…can a battery be at 3V and be almost dead?

I have the same issue on my multipurpose sensors …they say 1% and are at 2.98V.

Thanks for anyone who can shed light on this…I called support and then were LESS than helpful.

The voltage might be 3v but the amperage it is putting out isn’t enough to continue to power the device.

The firmware of the device has been changed about a year ago. The method how it reports voltage and battery has been changed.
It is a pain in the neck, but the device starts to report 1% after two weeks of use and it is able still to run for months. (Reporting temperature every 5 minutes.)
If your device starts to report false motions continuously, that is the time to change the battery with the new norm.