That sounds about right.

So anyone experiencing any polling issues? I was able to get the nest protect all discovered and everything looks good however I have a total of 5 protects in respective rooms and using the IOS app under recently tab the time stamp on the polling is not updating… its stuck on the time of the first discovery. I changed the polling timers to 5 minutes and now 10 minutes but the time stamp is still 20 minutes old.

That’s normal… The protects don’t check in very often. Now if 12hrs go by and no change than something might be wrong

So I believe its been almost 24 hours since I discovered these devices and have seen no activity updated since then I suppose how do i validate that the nest protect are indeed working in smartthings rather showing a cache data?

I just got nest protect. I cant see it in already configured nest manager. How do it add it in smartthings?

You can see updates by looking at the Recently “tab” when you open the device in the mobile app. It should show you data updates as data changing

Launch nest manager, and it should see the new protect (assuming you added it to your nest account during its setup/install), select it and hit done.

Ensure you followed install instructions and the device type handlers (dth) are installed in SmartThings.

Thanks. I found it. Thank you!

Is it possible to use motion sensor/water leak sensor or any other sensor
which has temperature detection as remote sensor?

the remote sensor automation lets you select alternate temperature sensors to use for the zone.

Tony will have a new release later this week, so you can try it now, or get the new release friday/this weekend

Tonesto7 response was "That’s normal… The protects don’t check in very often. Now if 12hrs go by and no change than something might be wrong:

its been over approx 2 days an no updates are showing no matter how many times I do the refresh.

You next choice is the PM tony and I with IDE logs, so we can see what the IDE logs say.

Yeah we will need to see so logs from the IDE
https://graph.api.smartthings.com/ide/logs

IDE logs sent to you and Eric

Thanks so much for this awesome app. This is a massive thread, so I apologize if this info is already in here. Can you point me to a link on how to update the app? Mine is still 2.5.10. I am having issues seeing my Nest Protect in Smarthtings, (your smart app sees it).

Before I started troubleshooting, I wanted to make sure I have the latest version.

Go to the wiki listed in the 4.0 thread. Gives you all the instructions.

Thank you for that. I was able to update and install the device, but I am still having a weird status. Please see the attached. 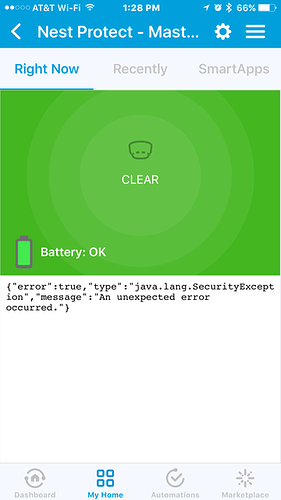 I noticed my automations weren’t working this weekend. It turns out they haven’t been working for a couple of weeks. I had to uninstall the automations, the associated SmartApps and Nest Manager. Once I reinstalled everything, all worked as expected. Is this normally needed when upgrading to a new version of Nest Manager?

Reinstall is Not usually required. This upgrade required all existing automations be removed before upgrading because it was such a drastic change to the core code.

I’m in southern part of Ypsi too - we should set up a S. Michigan group. I’m just getting into it and starting to make my house slowly functionally smart. It’s an interesting, albeit slow, project thus far.