Our septic control box has a piezo alarm that sounds off for both high water and low air pressure conditions. The piezo sounds at just the right frequency as to be nearly indistinguishable from my tinnitus. But it is very annoying to the neighbors.

Using some guidance from another thread on installing a wireless notification hack into the control box, I now receive said notifications on my phone when either condition takes place. The problem is that in order to silence the alarm I must be home so that I can go out to the control box, on the outside of the house. I travel with some frequency and it seems to never fail that the alarm will sound while I am gone.

What I would like now is to install some kind of (simple) remote cut-off capability, using an inline wireless on/off switch that is small enough to fit inside the control box.

The circuit for the piezo is simple: line in, neutral out. Here is the schematic… 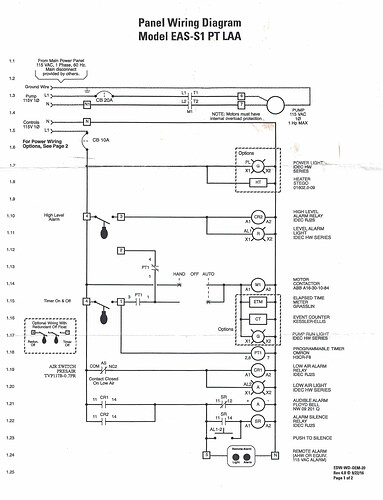 And a pic of the control box, with the current dry contact switch that I installed (not Z-Wave). 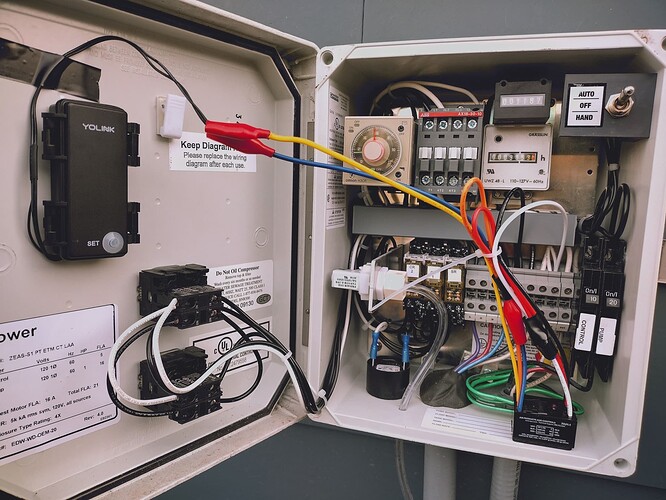 I used the Yolink contact sensor simply as proof of concept because I had it, but not a Z-Wave contact. I’ll be replacing that with Z-Wave.

I apologize for not explaining this better. I know enough to hack my way through some of this, but some of the details on the schematic is above my head.

I appreciate any insight or tips on how to go about my project. Thanks, in advance!!

Sounds like a very useful project! There are a few things we need to know first before we can help.

Assuming your schematic is right, the easiest way to silence the alarm would be to simulate the existing momentary pushbutton shown that silences the alarm (shown as AL1-2). A relay that has contact that is rated for 120V AC appears to be what you would need to accomplish this–without knowing the existing SR relay’s technical info, I"m not sure what the contact would need to be rated (amps)…so, more info is needed…like @JDRoberts mentioned above.

@Scott_Seydor , is this the same as your project? It got flagged as a duplicate by the automatic software.

Ok, I’ll ask a moderator to restore yours as soon as possible. Sorry about the confusion!

If you don’t want to wait, you can just start another new thread in this section of the forum, under projects. Projects are allowed to be similar, the issue is often in the small details.

Thank you so much for the replies! I’ll try and fill-in the blanks…

I’ll sketch out some of the details inside the box, which is fairly easy to follow with the schematic which I attached earlier.

Yes, the schematic is the one for this system. Yes, the indicated momentary push button that is in-place will silence the alarm, but only for about 1 minute. If the cause is not corrected, the alarm sounds off again.

The Fibaro motion sensor would be worth trying as it also detects both light and vibration. You might be able to find a place where you could put it where the siren would set off the vibration alarm. And you could get a separate trigger for the light level. It’s Z wave plus, so the range will be pretty good. And it’s quite small and battery-operated. So I think that would be the first one I would try. No wiring required, you just have to figure out the best place to stick it. [image] To make it work with smartthings, make sure you get the Z Wave model, not the HomeKit model. If you are in the North American region, Homeseer has a light sensor intended to detect when the indicator light on a dumb appliance comes on or changes color. So it may also work, but it’s not available on the E…

Sorry if I didn’t make this clear when I posted.

Just a little further detail on my alarm notification installation…

The schematic on my septic (posted above) shows block Terminal-5 and block Terminal-Neutral designated for a remote alarm installation. This circuit will close when the Floyd Bell Alarm is energized and is what I used to wire PAM-1 relay.

From the relay I connected the Yellow/Normally Closed wire, and the Blue Common wire to the contact sensor.

The contact sensor pairs with a Yolink hub that resides in the mechanical room in my lower level of the house.

While I’m fully invested in the Smartthings universe, with about 40 paired devices, I’m quite satisfied with Yolink. I became interested in Yolink primarily for their water leak sensor, which run about $17 on Amazon. I have 10 of these throughout the house and have been totally reliable. Yolink claims their devices have a range of 1/4 mile, so it is a particularly good fit for remote site monitoring.

I believe this configuration would work equally well with a Z-wave or Zigbee sensor. 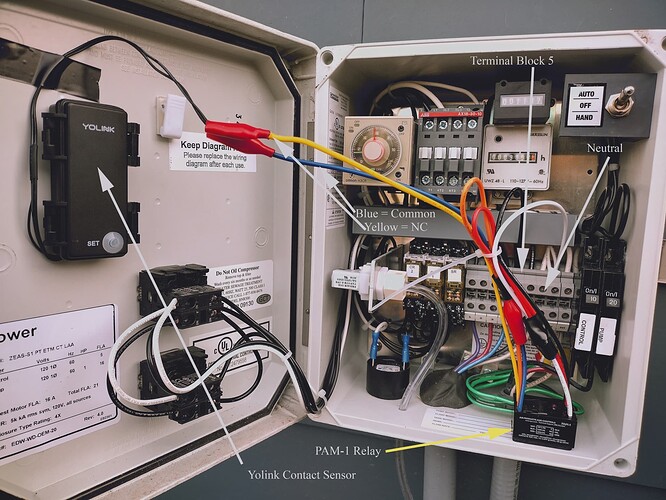 It’s weird that the alarm would restart after a minute. It looks like the SR relay is sealed in with itself, so unless the two alarm relays drop out, it should stay sealed in.

Anyway…I think an “easy” alarm disable would be to put a NC contact in series with the bell alarm. Then just flip the switch to turn off the bell alarm. I’m not sure the best solution for it, though.

Right now I have the line to the alarm pulled off so it won’t ring. The septic installer is supposed to come out Friday to fix this mess…it’s a new home install and only 2 years old.

I’ll keep looking for a way to switch it remotely. Thanks!

Looking at this more, I think the Zooz Zen51 dry contact relay MAY work. Their documenation is a little lacking on alternative connections (or I can’t find it) than what they show, but I think this could easily work…and it’s fairly small.

I’ll have to study this. Electrical comes slowly to me. Would need to tap this into a constant power source, and then wire this inline to the piezo alarm. Looks promising…thanks!