I’m new to z wave. Here’s my situation: I have a ceiling fan in my bedroom that has regular lights and separate decorative lights. The power runs to that fixture with a 14-2 romex that sends power to switch from fixture on black and back to power fan and lights on white. Here’s what I did: installed a GE fan control switch inside the fan shroud wired with mains power, a enerwave zwn-rsm2 in the lighting kit which is also powered by the mainstream and used load 1 for main lights and load 2 for decorative lights. I also rearranged the wiring to the switchbox; now it has a hot and neutral in it, both wire nutted off. I want to install a remote switch there that will act as a repeater and can be programed to just turn only the lights on and off. Any suggestions would be greatly appreciated.

As long as there is a neutral at the switchbox where you want to put the remote, the Linear/gocontrol auxiliary switch, the WT00Z-1 , is popular for this type of use.

It does have a Z wave radio and it does communicate to the smartthings hub, so you could have the switch send the message to the hub and the hub send a message to the relay controlling the light kit for the fan.

It is not a load controlling switch. So it is considerably less expensive then a master switch would be. 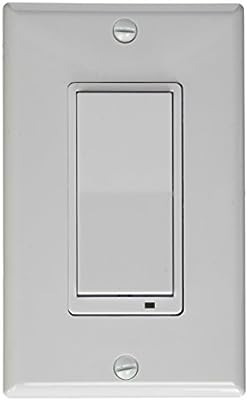 Another option to consider would be the Homeseer master switch, and just not connect the load.

This switch has the ability to capture double tap, triple tap, and long hold at the switch itself and then sends a “central scene command” to the hub.

It’s not as intuitive, because people have to remember what the different tap patterns are, but it does let you control multiple devices from a single gang switch.

At the present time it requires custom code from the community, but it’s a pretty popular switch because people do like the double tap option.

If you use the gocontrol switch I mentioned previously, you’re just going to have all lights on and all lights off from the wall switch. Which might be all you want, but I did want to mention the alternative.

Thanks for the information. I like the homeseer idea, however I need to keep it simple. I only need the switch because my fiance doesn’t like having to tell Alexa to turn the lights on. She’d rather hit a switch. So double and triple tapping would just frustrate her. Lol