After ordering around 5 PM I received an email from the store saying they don’t have the item in stock and they canceled my order. It is still listed on the website for 50% off so I’m heading there today to find it along with a print out of the price.

Hope they will still honor.

Are you all able to get Iris stuff working with Smartthings? Have things changed since:

Hi Folks. Forgive the first post, and potentially rehashed topic, but I can’t seem to find any conversations on if the 2.0 hub changes the game for allowing connectivity with Lowes/IRIS sensors (Open Close/Motion specifically). Does someone know the answer, or can point me to a previous thread on this topic? This site looks awesome for pulling down “similar” topics, but can’t seem to find anything post the 2.0 release. Thanks!

Are you all able to get Iris stuff working with Smartthings?

The new revisions of the iris sensors (in the purple cardboard box, not the plastic blister packaging) work with ST.

Continuing the discussion from Current Device Deals & Best Prices: Motion sensors were also in the process of being set out. Not sure what was in the other boxes as I didn’t want to open all of them

I may pick up the motion sensor tomorrow and test that out.

There are several discussions about the 2nd gen devices working with ST. Do a quick search and you’ll find them (@btk linked a great one) . In fact, about 30 minutes ago I just added another smart plug. I use a ton of the motion sensors, several open/close sensors, and a button or two.

I just ordered (for store pickup) the GE on/off switch, model #45637 for $17.49They only had the one locally, or I’d have picked up more… might check your local stores to see if they’re clearing them out for some reason.http://www.lowes.com/ProductDisplay?productId=3707736

Do you know if these are dimmer switches? When you switch them off and on do they go from 0 to 100 instantly or are they like the other GE switches that slowly go from 0-100 (I would assume instant if they aren’t dimmers.)

The reason I ask, is I have Phillips hue bulbs installed in 4 can lights in my kitchen but i’m looking to have smart switches in there as well because it’s annoying to have the normal flip switch always on. Does anyone know how well it would work to have both smart switches and phillips hue bulbs? I have certain scenes where I want to have individual control of lightbulbs and sometimes I just want to easily be able to turn them all on from a switch. Or will this cause a lot of my scenes to get out of sync / other issues.

Or will this cause a lot of my scenes to get out of sync / other issues.

Detailed discussion of the use of smart switches with smart bulbs in the following topic (this is a clickable link). It should answer your questions.

I too was able to use the coupon code for the Home Automation & Comfort kit and got free shipping to my home.

It is comparable to the Monoprice dual-relay but it’s out of stock right now so this is next best thing.

Does that present as two separate switches in ST?

Does that present as two separate switches in ST?

Just ordered two packs of these for a total of 4 devices: I’ll let everyone know how it goes once they arrive.

This will at least do couple bedrooms and a couple of bathrooms.

The 45637 is on/off with no fade. Instant on instant off, Just installed one an hour ago

Well when I had Wink the average delay was 5-10 second from the door opening until the lights came on.
On a good day the 30 second autolock would have locked the door again before the lights came on that were triggered by the unlocking.
So I can completely understand why they are thrilled with a 2 second delay on triggers

My Home Depot is clearing out the TCP connected bulbs. I had TCP a few months ago and the connection was spotty but I think it improved a bit. If you already have TCP these would make more sense. 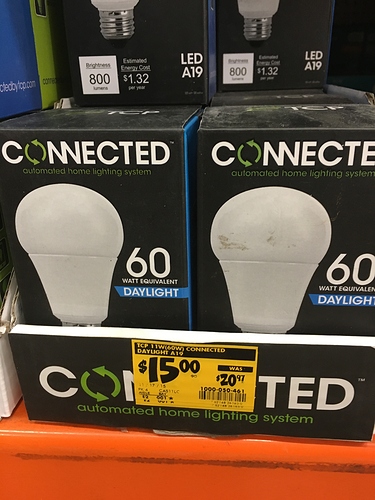 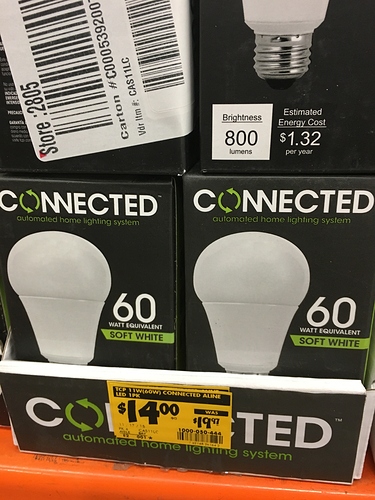 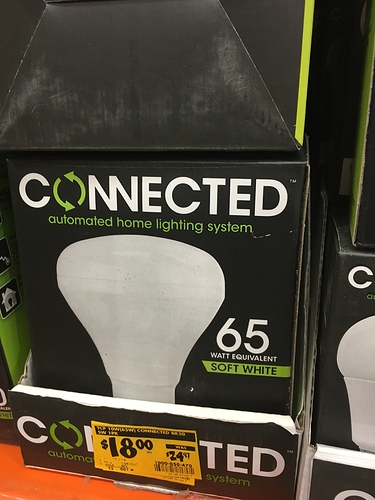 I was able to score an Iris Garage Door Opener for $55 at my local Lowes. Took me trying 4 stores but I finally got one. They are ‘on sale’ for $89 right now. Plenty more in my area actually.

My Home Depot is clearing out the TCP connected bulbs. I had TCP a few months ago and the connection was spotty but I think it improved a bit. If you already have TCP these would make more sense.

If you plan to control the TCP lights with ST I would stay away from this. If you just want TCP to use independently with their own app they are pretty reliable.

the Philips warm glow is the nicest bulb I have tried yet. It dimms nice on my GE dimmers, and moves from 2700 to 2200 as it dimms. My wife thought it was an incandescent bulb.

I’ll chime in and agree with Greg, the ST-TCP integration is anything but reliable. I am constantly having to open the tcp app in ST and login again. Sometimes it’s good for a few weeks other times it only lasts a few hours. Luckily the daughter inherited all the TCP bulbs ,and I figured out that it was just a matter of running the setup in ST app again to reconnect them. The first time I was stumbling around in her dark basement unable to turn on the lights I wasn’t happy.