I searched but didn’t find anything specific to this question.

I have a few iPhones I am using as presence sensors.
Adding them from the App works fine and they come across as “placeholder” - expected.
But my Phone (despite its name) comes across as “iPhone” in the Device List.

I would like to modify the “Display Name” - but because it’s a “placeholder” it doesn’t have a “Device Network ID” - thus you can’t save it.

Does it matter what you put in the Device Network ID if the device is “placeholder”? 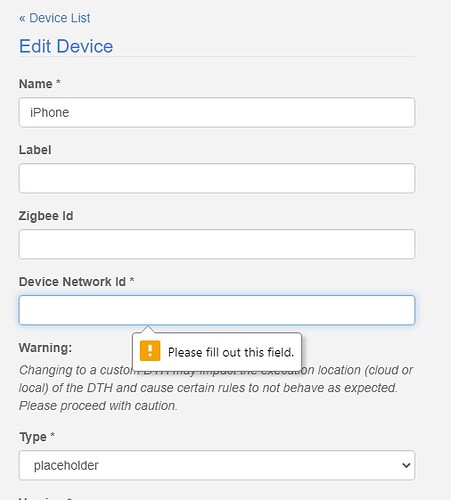 If it Says “placeholder“ it is using the new architecture, which the IDE does not support. You should not try to change anything there, and it’s not going to make any difference if you do change anything there. So that’s not going to help you in this case. hopefully someone else will know how you can accomplish what you want to for the new architecture.

My problem is I have 5 show up as “IPhone” there is no way for me to figure which one is which.

Perhaps rename them all 1,2,3,4,5 - then have each one leave and depart and keep track of the times? Pain in the ass, but…

My problem is I have 5 show up as “IPhone” there is no way for me to figure which one is which.

Are all the phone’s named ‘IPhone’ or isn’t there a Bluetooth/phone name for the app to use like on Android? Either way it is a bit late once the device is created.

If you have convenient API access you will see the mobile presence devices have an ownerId. If you hit the /accounts endpoint you will see a name is of the form user_uuid:UUID. If that matches an ownerId then bingo. Unfortunately you have to do that for every user and it won’t help if there are multiple phones for the same person.

All phones have a name, but ST shows them as “IPhone”

If you hit the /accounts endpoint you will